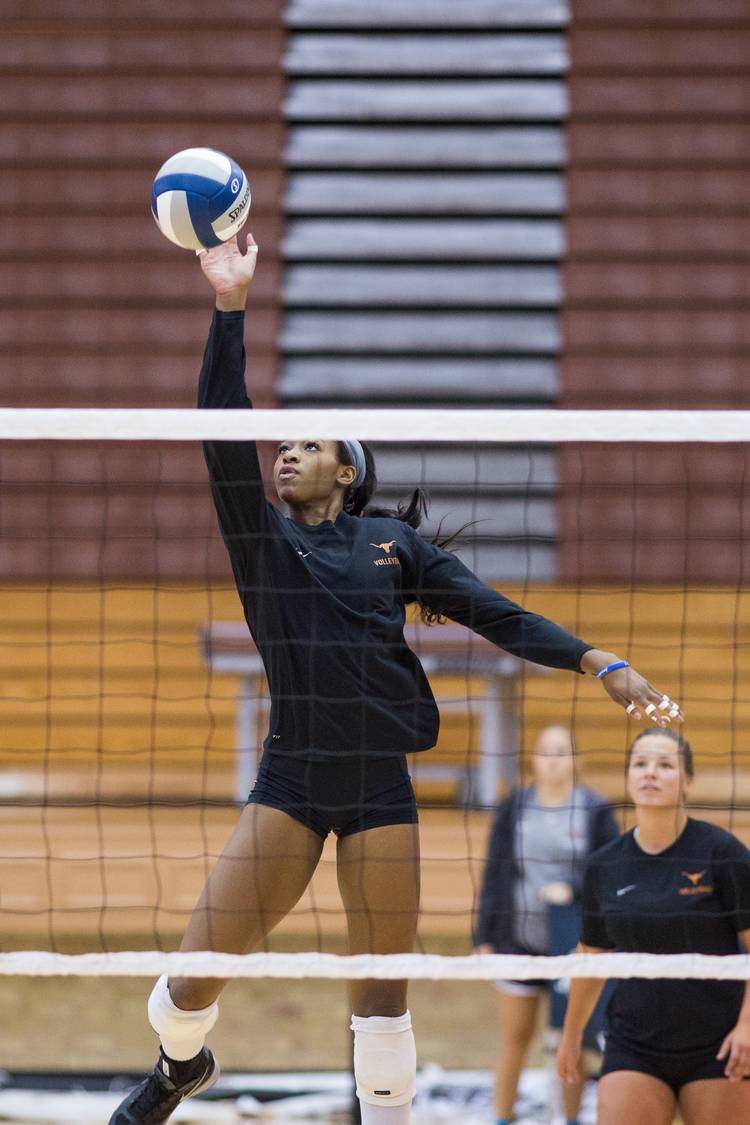 Coaches raised the shovels high above the net to simulate the disparity in length their hitters would face against the stretched-out Longhorns.

Chiaka Ogbogu has a chilling effect on opponents.

Texas recently measured the vertical jump of each of its players, and no one was surprised when Ogbogu reached higher than anyone. By a lot. At 10 feet, 8 1/2 inches, she came out on top by a whopping four inches.

“She’s always jumped that high,” opposite hitter Ebony Nwanebu said. “She was 16 and could jump to the roof.”

The sky’s the limit for Ogbogu, who opens her third season on Friday as one of three team captains — Molly McCage and Nicole Dalton are the others — as well as a national player of the year candidate. Rice awaits the Longhorns, who are ranked No. 3 in the country, on the first day of their American Campus Classic. Host Texas plays UC-Irvine and LSU on Saturday.

There is some level of concern that the Longhorns could struggle early on as they find their way after the losses of All-Americans Haley Eckerman and Khat Bell. Both will someday be in the women’s hall of honor at Texas. Still, there’s a case to be made that Ogbogu was the team’s top player in 2014 when the Longhorns advanced to the NCAA national semifinals for the third straight year.

Ogbogu, who’s 6 feet, 2 inches, ranked second on the team in points and blocks, and third in kills. Her .420 hitting percentage ranked ninth nationally.

“She was our most consistent player night in and night out,” coach Jerritt Elliott said.

Ogbogu, the Big 12’s preseason co-player of the year, has emerged from the shadows of Eckerman and Bell to assume a bigger role, though she’s not willing to say the team now belongs to her.

Since Texas’ season-ending loss to BYU, Ogbogu has been busy tightening the weaker areas in her game. For the first time, she can now elevate off one foot, increasing a vertical leap that was already quite springy. She’s also done maintenance on defense, which is important because McCage, the team’s other middle blocker and the more defensive-minded of the two, also will spend time at opposite hitter.

“I think defensively I’m going to have to get better,” Ogbogu said. “The coaches talk to me about how I’m more of an offensive middle, but in order to get more well rounded, I’m gonna have to get better on my defensive game. I need to track the other hitter better and make sure I’m not reaching too high and they’re not hitting underneath me.”

What a twist. Ogbogu’s greatest strength — her ability to jump and scrape the ceiling — can make her vulnerable to attacks.

As best as Elliott can recall, only one player in his 15 seasons at UT has recorded a higher vertical leap than Ogbogu’s. It was Destinee Hooker, whose leap of 10 feet, 10 inches stretched one-and-a-half inches higher than Ogbogu.

Ogbogu should be able to dunk a basketball on a standard rim, which measures at 10 feet. Yet for whatever reasons, she can’t get the technique down and always comes up short.

“I have really long limbs, so I guess that helps,” Ogbogu said. “My whole life I’ve trained to have a strong lower body and to have that jumping ability.”

A burnt-orange youth moment? Texas could go all-in with freshmen