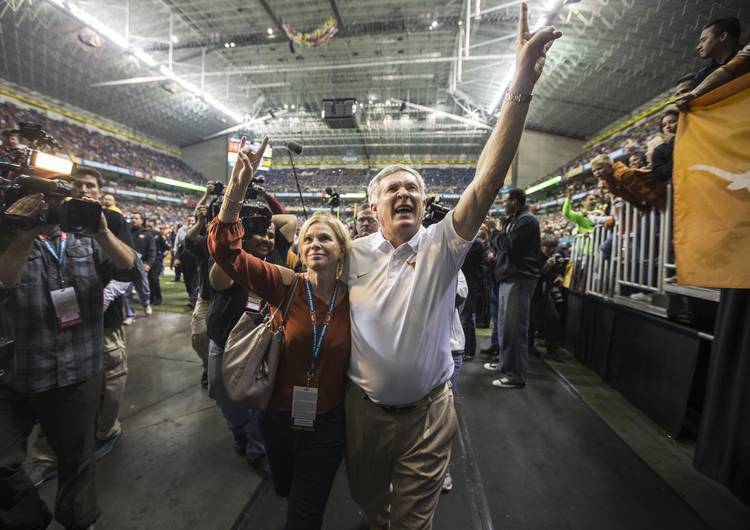 Texas Longhorns'Head Coach Mack Brown heads off the feild as the head coach for the last time with his wife Sally Mack after losing against Oregon Ducks 30-to 7 in the of the NCAA college football game 2013 Valero Alamo Bowl at Alamdome in San Antonio, Monday, Dec. 30, 2013. (RICARDO B. BRAZZIELL / AMERICAN- STATESMAN)

TEXAS: THE PAST FIVE YEARS

A look at the five years since the Longhorns’ last national championship game appearance at the end of the 2009 season. Since then, Texas is 36-28 overall, 23-21 in Big 12 games and 2-2 in bowl games:

2014: Charlie Strong’s first year. Texas went 6-7, 5-4 in the Big 12. Two key seniors, QB David Ash and C Dominic Espinosa, were lost in the opener. The Longhorns lost four of their next five and ended with back-to-back losses, both prime-time embarrassments — 48-10 to TCU on Thanksgiving and a 31-7 blowout to Arkansas in the Texas Bowl.

2013: Mack Brown’s last season. Texas, which went 8-5 and 7-2, stumbled out of the gate (1-2), then got hot with six straight wins, including the big 36-20 upset of 12th-ranked Oklahoma. But the Longhorns sputtered down the stretch, losing three of their last four. The final game of the Mack Brown era? A 30-7 Alamo Bowl loss to Oregon.

2012: Goodbye, DKR. A promising 4-0 start was waylaid by a close 48-45 home loss to No. 8 West Virginia, followed by a 63-21 dismantling by No. 13 Oklahoma one week later. Losses to TCU and Kansas State to close the regular season landed Texas in the Alamo Bowl, a 31-27 win over Oregon State. Texas ended up 9-4, 5-4. Darrell Royal died in November, and on that Saturday, the Longhorns lined up in the wishbone for their first play against Iowa State.

2011: Ups and downs. The lowlights of Texas’ 8-5/4-5 season included back-to-back losses to top 10 teams Oklahoma (55-17) and Oklahoma State (38-26) and the official end of the Garrett Gilbert era. But the season ended strongly — the last-second 27-25 come-from-behind win at Texas A&M in the final game of their historic rivalry and a 21-10 win over Cal in the Holiday Bowl.

2010: Yep, that happened. We shouldn’t have been fooled by the 3-0 start in the season immediately after Texas’ national title game loss to Alabama. Texas, which would finish 5-7 overall and only 2-6 in the Big 12, lost six of its next seven games and limped to its first losing record since 1997, no bowl game and a staff overhaul in the offseason.