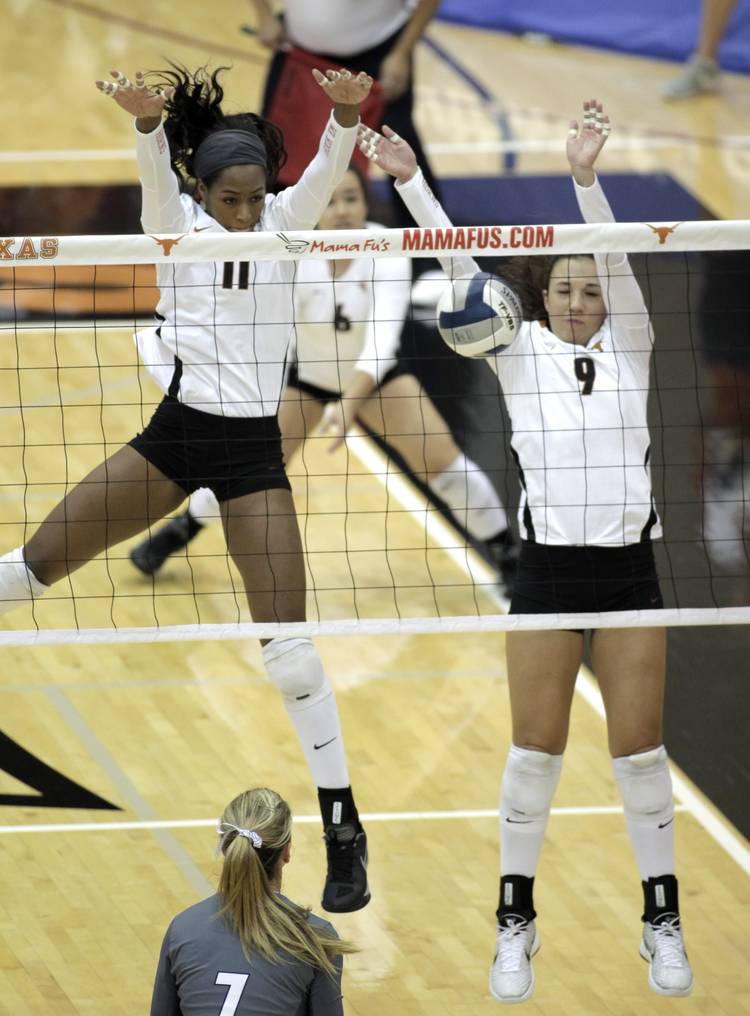 It was a new season with the same familiar outcome.

Actually, it was better than most.

The Texas volleyball team looked as sharp Friday as in any of Jerritt Elliott’s 15 season openers as coach.

“One of the best,” Elliott said.

The veterans were sharp, as was freshman Morgan Johnson, who assisted on six blocks in her debut at middle blocker. She shared time with Chiaka Ogbogu, who hit .455 and took control as the second set got dicey toward the end. Those four or five points were the only time the Longhorns looked out of sorts all night.

“I thought overall we played at a pretty high level,” said Elliott, who notched his 400th career win. “I told the team I wasn’t expecting to be perfect tonight.”

Transfer Ebony Nwanebu didn’t play because of a back injury, and setter Nicole Dalton also sat out, as she’s slowly working her way back from surgery. Mix in those injuries with freshman Micaya White’s stress fracture, and the Horns are without three quality players, though Elliott indicated Dalton would play some Saturday.

“Our practice this preseason were pretty good,” Amy Neal said. “The freshmen are pushing the upperclassmen.”

Neal had 11 kills with a .375 attack percentage, while Molly McCage, who has slid over to opposite hitter from the middle, registered 10 kills on .471 hitting. Paulina Prieto Cerame, who has moved from opposite hitter to replace Haley Eckerman at outside hitter, came out swinging and posted six kills in the first set on 16 attacks. She cooled off a bit and hit .067 with nine kills.

“I’ll play anywhere Jerritt wants me to,” Cerame said. “I definitely think on the outside there’s more demand.”

As for Eckerman, the three-time Big 12 player of the year helped out on Longhorn Network coverage.

Johnson, a 6-foot-3-inch newcomer from DeSoto, looked comfortable in the middle and hit .556. She started over Ogbogu because Elliott preferred that rotation.

“When we recruited her, we didn’t know how good she was going to be,” Elliott said. “She’s one of those players who has just taken off.”

Johnson was on the court for much of the second set before Ogbogu, the preseason Big 12 player of the year, came on and rescued her teammates. After a Cat McCoy service error cut Texas’ lead to 24-23, Ogbogu crushed a shot that Rice somehow returned. Given another chance, Ogbogu finished the match with an equally powerful kill.

“We were definitely telling (setter Chloe Collins) to set Chi in that situation,” Elliott said.

Ogbogu (six kills) had just 11 attacks, which didn’t sit well with Elliott. He’d like to see her take 18 to 20 swings.

Freshmen Lauren Beard and Yasmeen Bedart-Ghani made their debuts.

Texas vs. USC: A tale of two NFL-quality rosters