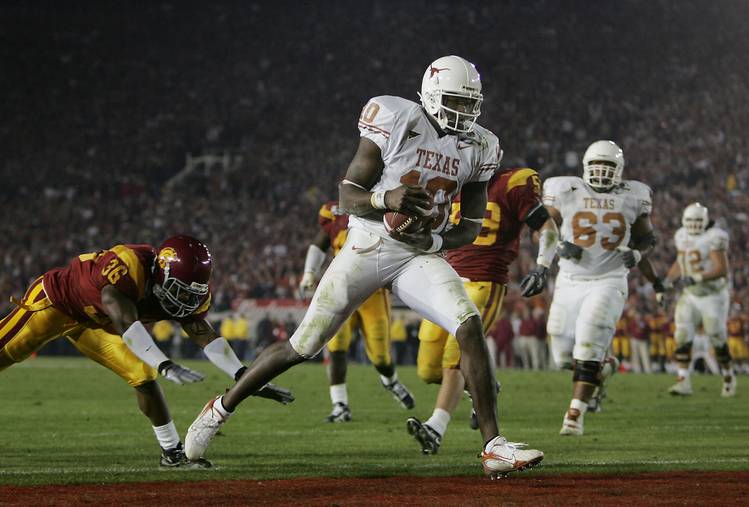 Texas' quarterback Vince Young scrambles into the end zone for a touchdown during fourth quarter action against USC in the 2005 National Championship game. (Rodolfo Gonzalez / American-Statesman)

There were 49 players listed on the participation report of the 2006 Rose Bowl who went on to play in the NFL. That included 15 combined Longhorns and Trojans who were playing their final game before getting drafted three months later. And four of those — Texas quarterback Vince Young and safety Michael Huff, and USC running back Reggie Bush and quarterback Matt Leinart — were top-10 selections.

Here’s a look at what those players taken in the 2006 draft accomplished at the next level:

David Thomas, TE (86th): Was a member of the Super Bowl XLIV champion New Orleans Saints. Had 102 career receptions for 938 yards and 8 TDs.

Rodrique Wright (222nd): Was drafted by Miami and also played with the New York Jets.

Note: Ahmard Hall was not drafted, but played fullback for six seasons with the Tennessee Titans as an undrafted free agent. Also, Texas had seven players from the national championship game drafted in 2007, four in 2008 and three in 2009.

Reggie Bush, RB (2nd overall): Nearly 9,000 yards of total offense playing for the Saints, Dolphins and Lions. Currently in his first season with the 49ers.

Matt Leinart, QB (10th): Career quarterback rating of 70.2 with the Cardinals, Texans and Raiders. He last was with the Bills (practice squad) in 2013.

Winston Justice, OT (39th): Played with the Eagles, Colts and most recently Broncos.

Texas vs. USC: By the numbers