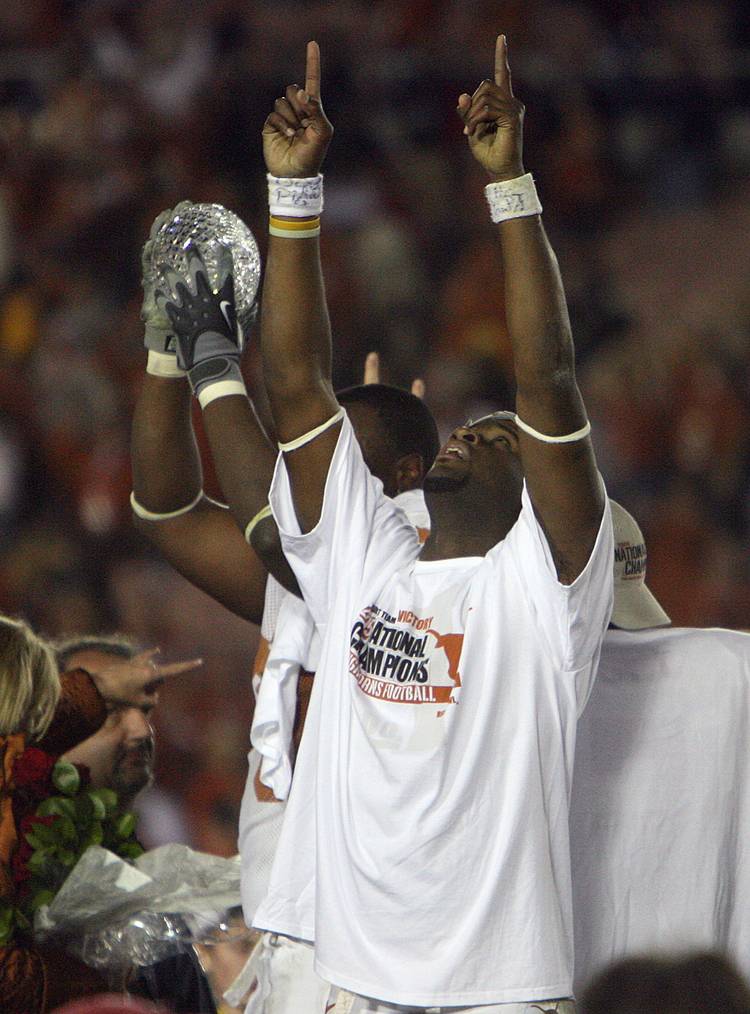 The American-Statesman sent a crew of more than 10 staffers to the 2005 national championship game. Just like fans or players, their memories of covering Texas-USC remain as strong as ever.

We reached out to a few of them — columnists Kirk Bohls and Cedric Golden, writer Suzanne Halliburton, photographers Ralph Barrera and Deborah Cannon, and former writers Randy Riggs and Mark Rosner — to share their memories:

Barrera: The shot that got away

I was one of four staff photographers assigned to cover the game, along with another staffer who was to edit for all of us. With a few minutes left in the second quarter, I get a call from my boss at the time, Zach Ryall. He tells me I need to leave the field immediately to help our editor, Matt Rourke, move pictures back to the office — they were not receiving anything, and it was not an option. There was a certain tone to his voice.

I asked what about the other three staffers who were also there, and Zach said I was the only one to answer my phone.

I spent the next two hours editing and transmitting my colleagues’ images, listening to the game in the workroom. When I heard the Horns were driving for the potential game-winner, I said, “I’ve got to get out there.” As I came onto the field, I could only watch — from about five people deep — as Vince Young ran for the end zone to win the game. There was not an image to make as I couldn’t see the action.

Cannon: Fighting for the perfect shot

The air was electric, and the fans and players were all on fire. After the game, I shot some celebration photos on the field and then ran back to the Texas bench and stood on it to get over the crowd. I’m only 5 feet tall, so I thought that would be my best chance to make a good image as the trophy was presented. I was so wrong. The stadium lights were giving me lots of glare, and I couldn’t get a clean shot. Then the podium cleared. I was desperate to make a good photo of the trophy in a player’s or coach Brown’s hands, so I ran down and fought my way through the crowd.

Like I said, I’m 5 feet tall, so I couldn’t see a thing. I just kept moving, looking through people for a glimpse as to where I should go when I spotted a crowd of media. I quickly made my way in that direction and suddenly Mack Brown was right in front of me. I grabbed my camera with the wide lens and started shooting, and coach Brown hoisted the crystal ball over his head. As he stood there triumphantly smiling, I fired off a few frames before he was whisked away. And with that, I was done.

That photo later graced the back cover of a book the Statesman published about the season. Sometimes persistence pays off.

Bohls: It was simply the best ever

It was the greatest sporting event I’ve ever had the privilege to cover. It had all the trappings of a big-time spectacle as well. I can still recall how ESPN gushed over the Trojans and labeled them the best college football team ever. I remember how relaxed USC’s entire team and Pete Carroll were and how open they were to the media. I remember how many celebrities were at the stadium, everyone from Alyssa Milano to Will Ferrell. I remember seeing Peter Falk — Detective Columbo — sitting at the bar one night at the Beverly Hilton, where we stayed.

I remember having trouble getting onto the field for postgame interviews because a cop wouldn’t let us credentialed media jump out of the stands. I remember linebacker Aaron Harris trying to cart off one of those triangular down markers, only to be told that was a no-no by a Rose Bowl official. I remember having 25 minutes to write my column that night.

Mostly, I remember it as one of the most exciting times in my career.

Golden: Ain’t over till it’s over

After Matt Leinart hit Dwayne Jarrett over the middle for a touchdown to put the Trojans up 38-26 with 6:42 remaining, we were given a brief moment to take inventory because defensive backs Michael Griffin and Tarell Brown were both laid out after colliding on the play. As they were helped off the field, I looked at Kirk Bohls and asked, “Is it over?”

Turns out it wasn’t.

I stayed up in the press box to watch the final minutes, expecting Vince Young to score. I ended up having to (politely) bull my way through a bunch of USC fans to get to the field. I took the wrong way, turned around and got smushed face to face against a guy wearing a Texas sweatshirt.

“I know you. You’re Denzel,” I said. Actually, it was Isaiah Washington, who was then starring on “Grey’s Anatomy.” We became instant BFFs on our way to the field. He even introduced me to his buddy and said he was looking for the guy from “Desperate Housewives.” Field security let me through but wouldn’t let me vouch for Isaiah. It might be the only time a sports writer had more pull than a television star.

Riggs: A nail-biter in more ways than one

Vince Young’s winning scramble is an iconic play in Longhorns history, but I have always remembered what happened moments earlier that allowed VY to do what VY always seemed to do. If Texas hadn’t stuffed LenDale White on fourth-and-2 with about 2 minutes left, VY probably wouldn’t have had the chance to be VY. But the defense did it. And so did Young.

The only problem was that 19 seconds remained after his fourth down, 8-yard run, and it felt like an eternity because we were under a deadline guillotine that dropped just eight minutes after the final gun. Made it impossible to soak up the scene, but we scrambled almost as efficiently as VY and got it done.

Rosner: VY was due

I don’t know when the other Longhorns began wearing their game faces for the Rose Bowl. But I’m pretty sure that Young applied his on Dec. 10, 2005, the night Bush beat him for the Heisman Trophy in a landslide. Young was more than disappointed that night in New York City; the result seemed like an affront.

Given time to formulate a proper response, Young offered this on Jan. 4 against USC — 467 yards passing and running, the last of his three touchdowns the winner with 19 seconds remaining.

“I feel like I let my guys down, let my family down, let the whole cities of Austin and Houston down,” Young said after the Heisman ceremony. When he crossed the goal line in Pasadena for the last time, it felt as if they all crossed with him.