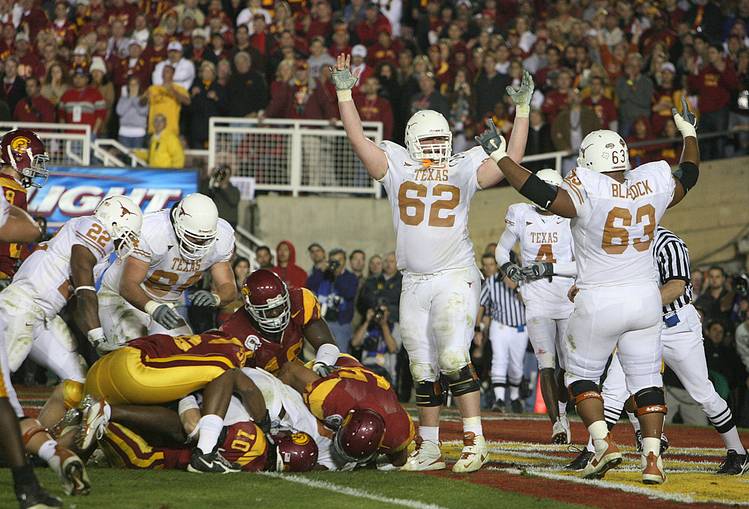 Vince Young’s fourth-down touchdown run with 19 seconds left obviously goes down as the play of the game. But there were key plays along the way which went a long way in determining the outcome, plays that are easy to overlook 10 years later.

1. Ross’ fumble: After seizing momentum with an early three-and-out, Texas gave it back when punt returner Aaron Ross fumbled near midfield. Ross was twirled around by Collin Ashton before Scott Ware finished the job.

That led to USC driving 46 yards on five plays, capped by the first of LenDale White’s three touchdowns.

2. Fourth-down stop, Part I: Both teams entered the game averaging 50-plus points, so going for it on fourth down was not much of a gamble. Needing one yard, Heisman Trophy winner Reggie Bush moved in motion out of the backfield, and quarterback Matt Leinart was stuffed.

Sideline reporter Todd Harris chimed in that USC Pete Carroll had breathlessly tried to call timeout before the snap. Texas took over at its own 16.

This would not be the last time the Trojans excluded Bush on fourth-and-1 (See No. 9).

3. The misguided lateral: Bush was capable of jaw-dropping plays (remember when he zig-zagged against Fresno State?), but he went a little far on this one. Getting greedy after a 37-yard pickup, Bush lateraled to an unsuspecting teammate, and a mad scramble ensued.

Texas’ Michael Huff pounced on the loose ball, and the Longhorns took over at the 18. It’s quite possible that the Trojans would have gone up 14-0 had Bush simply gone down.

4. Griffin’s big pick: From UT’s 25, Leinart lofted a pass into the front corner of the end zone for Steve Smith. At the last minute, safety Michael Griffin raced in and took the ball away. Griffin was initially ruled out of bounds, but replays showed he had possession with one foot down. USC led 7-3.

5. Young’s big TD (the other Young): Vince Young, who was runner-up to Bush for the Heisman, did his best Bush impersonation after rumbling for 10 yards to USC’s 12-yard line. As he began to fall, he pitched to Selvin Young, who did the rest for a 9-7 lead (David Pino missed the extra point).

Multiple replays showed Vince Young’s knee touching the ground prior to his toss. Still, even had the call been correct, Texas would’ve been in good shape staring at 1st-and-10 from the 12.

6. Okam stuffs Leinart: With 32 seconds to go, Frank Okam dropped Leinart for a sack at UT’s 20. The next play, Okam burst into the backfield and Leinart lost his footing (the sack was credited to the team). USC was on the cusp of entering halftime with a two-score lead, but settled for 16-10 after a 43-yard field goal.

7. Thomas takes a dive: None of David Thomas’ 10 catches were more impressive than the one he made to extend a drive on third down. Thomas, who had slipped and fallen, got up and dove for a bullet from Young. Had Thomas not caught it, Texas would have had to punt from its 27. Instead, the Horns drove to USC’s 14, where Pino missed a field goal to the right.

No points came as a result of Thomas’ reception, but it kept Leinart and Bush on the sideline.

8. A costly penalty: Most of the game’s unsung moments went Texas’ way, but not this one. After Leinart delivered a 33-yard strike to David Kirtman, linebacker Robert Killebrew came in hot and knocked Leinart to the ground. Roughing the passer was called, giving the Trojans a net gain of 48 yards. Two plays later, USC went ahead 38-26 on Dwayne Jarrett’s 16th touchdown catch of the season.

9. Where was Bush?: Two big stops were key, though one of them isn’t as celebrated as the other. On third down, Ross popped White a yard short of the marker, dislodging the ball. The Trojans retained possession.

On fourth down, White was stopped again, this time by Michael Huff. Bush, who carried 13 times for 82 yards, watched helplessly from the sideline. The two stops and turnover on downs enabled Young and the Texas offense to march for the winning touchdown.

10. An ill-advised timeout: The Longhorns went up 39-38 on Young’s iconic 8-yard run on fourth down. Even a novice observer could determine that a two-point conversion would follow, as Texas wanted to push its lead to three to ensure it couldn’t lose on a field goal in regulation.

Yet the USC sideline was flummoxed, and the Trojans burned their final timeout with 19 seconds to go. It probably wouldn’t have mattered; Bush gained 27 yards on a short catch before Leinart threw incomplete for Jarrett to end the game.

1. Mack gets his coordinator: Gene Chizik, after meeting Mack Brown only five days before, was hired as Texas’ defensive coordinator to replace Greg Robinson, who had left to become head coach at Syracuse. Chizik, who left Auburn, was given a then-lofty $250,000 per year salary. He’d earned the Broyles Award as the nation’s top assistant coach in 2004.

2. A near perfect opener: Texas mauled Louisiana-Lafayette 60-3 to open the season. Young missed only four passes, while tailback Jamaal Charles rushed for 135 yards, a school single-game record for freshmen. Texas averaged 8 yards per rush.“I felt like this was the perfect opener for us,” Brown said.

3. Horns topple the Buckeyes: Remember “9-99-Leak-Go?” That was the name of the play that propelled receiver Limas Sweed into Longhorns lore and gave Texas the 25-22 road win over Ohio State.

It was the first time the two schools met in football. Ohio State drew a record crowd of 105,565 (the most ever to see the Longhorns in person). The Buckeyes were the highest ranked non-conference opponent Texas had beaten on the road since No. 5 Auburn in 1983.

4. O-for-OU streak ends: The Longhorns put to rest the Sooners’ five-year winning streak by humiliating Oklahoma 45-12 — Texas’ most lopsided victory in the series. Young threw three touchdowns and 241 yards. Charles, on a simple zone read, dashed 80 yards for a touchdown. It was the longest run ever by a Longhorn against OU. The defense held a gimpy Adrian Peterson to 10 yards and tackle Rod Wright capped the scoring with a 67-yard fumble recovery.

5. Texas reaches No. 1: The Longhorns briefly displaced USC for No. 1 in the BCS standings, with five of the six computers impressed by UT’s dismantling of No. 10 Texas Tech, 52-17. Texas took a .0007 lead over the Trojans in the complicated formula. It was the slimmest margin between the top two teams since the BCS began in 1998. It also was the first time Texas was atop a poll since Oct. 8, 1984.

The two main human polls still had the Longhorns No. 2.

6. VY goes stat crazy: Young’s best ever regular season game came in Stillwater, Okla. He totaled a school-record 506 yards — 269 on the ground, 239 via the air — against Oklahoma State. And in the major Heisman tracking polls, Young, temporarily, eased past Bush for the top spot.

7. Hello, shutout: The Longhorns enjoyed their first shutout of the season in beating Baylor, 62-0. It was perfection on both sides of the ball. Perhaps the best play was a 42-yard catch-and-run to Ramonce Taylor. And Killebrew notched his third blocked kick in two games.

8. Goodbye, VY: On senior day, Texas scored 52 points against Kansas in the first half. It was the most points scored by UT in a half since 1974. By game’s end, fans were chanting for Young, a junior, to come back for another season. Alas, it also was Young’s last game at the stadium.

9. And it’s goodbye to A&M: The game at Kyle Field was ugly, befitting a rivalry. But the Longhorns, 26-point favorites, pulled off a 40-29 victory over Texas A&M to push their record to 11-0. Young’s game was off. He threw for only 162 yards against the country’s worst pass defense. Huff, who was blitzing, dropped A&M quarterback Stephen McGee for a 19-yard loss to seal the victory.

10. A Big 12 rose celebration: The Longhorns celebrated their Big 12 championship, a 70-3 win over Colorado, with roses. It was UT’s first league title since 1996. The game never was in doubt. UT scored on 10 of its first 11 possessions. And its invitation to play USC was a given.

Texas vs. USC: By the numbers

Ten seasons later, what a long, strange trip it’s been for Texas, USC