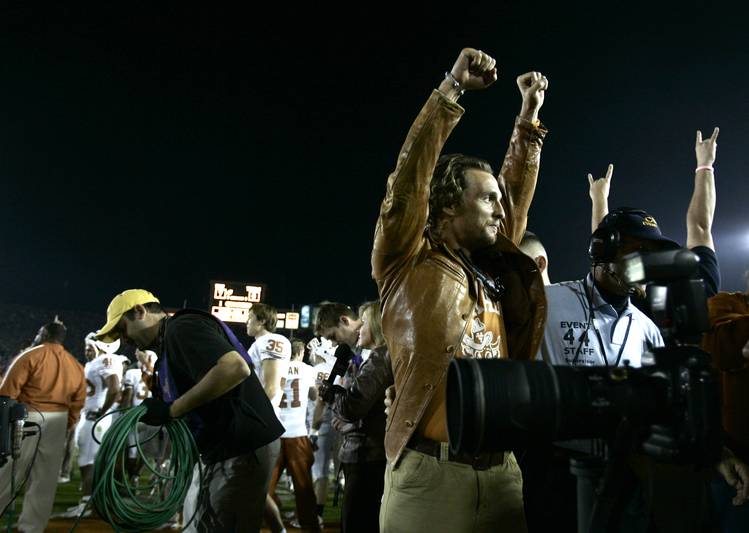 A decade is plenty of time to reflect upon a game, especially one as significant as Texas’ thrilling 41-38 victory over USC. So let’s muse on the impact that Jan. 4, 2006, encounter still is having as the 2015 season is about to start.

It gave college football some glamour

College football fans really adored this matchup. With celebrities like Michael Jordan and Will Ferrell taking in the game in person, the Rose Bowl was watched on television by 35.6 million fans. It was the highest-rated championship game in the BCS era (1999-2014). Need some context? This year’s title game, the first in the much anticipated College Football Playoff format, got close with 34.1 million.

Texas and USC combined for a championship-record 79 points. The Longhorns gained 556 yards of total offense, the best performance by a team in the BCS era.

But to be fair, there was a bit of defense played. Given that the Trojans normally scored 49 points a game and featured two Heisman winners in the same backfield, and with some billing USC as possibly the best offense of all time, holding them to 38 was a significant achievement.

It took Young a season and a half to get good at the passing game. By 2005, he was nearly as at ease passing the ball as he was running it.

Coaches knew that putting a fleet, dual-threat quarterback in the backfield made an offense nearly unstoppable. Pete Carroll tried blitzing and using a man coverage on Young. It was the main reason Young gained 200 yards rushing.

If a team tried zone, Young could hit the underneath routes. Tight ends were his best friends. David Thomas had 10 catches in the Rose Bowl, one reception short of the top performance in a championship game.

Since then, the best quarterbacks in the game have been dual threats. Think of the biggest names — Heisman winners Cam Newton, Robert Griffin III, Johnny Manziel, Jameis Winston and Marcus Mariota. Young became the barometer.

It made running back rotations cool

A decade ago, tailbacks didn’t like to share carries. They probably still don’t, but rotating backs has become trendy in the pro and college game.

Rather than relying on one workhorse, USC and the Longhorns liked to alternate backs.

Young still led the team in rushing at 80 yards per game, but the Longhorns as a team averaged 275 a contest. That was second-best in the country.

It started mainstreaming the zone read

The Longhorns turned to the shotgun zone read at midseason of 2003. At the time, few big-time schools were running it, although in theory, it was a new-age progression of the retro wishbone. Conversely, USC was still running from the I formation and calling “Student Body Right” sweeps introduced by John McKay four decades before.

Texas won the national championship with the zone read offense, helping the Longhorns to average 512 yards and 50 points a game, both school records.

The zone read has been embraced since then, as programs like Oregon and Baylor have redefined college offenses.

Carroll took the head coaching job at USC after the 2000 season. He’d been out of football for a year after being fired by the New England Patriots. Oddly enough, he was USC’s fourth choice for the job.

Carroll’s Trojans won 34 straight games from 2003 through the 2005 regular season. But after the Longhorns beat USC, they never made it back to the national championship game, although they kept posting double-digit wins.

Covering the Big Game: Our staff memories of Texas-USC