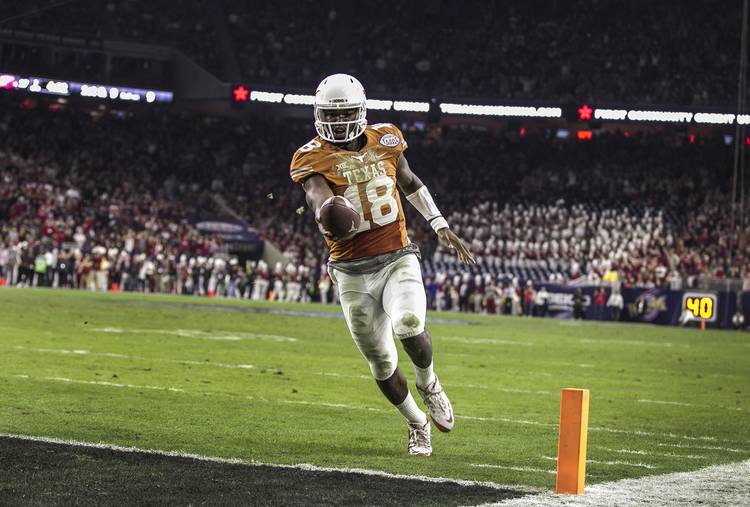 Tyrone Swoopes pictured in a bowl loss to Arkansas, is back as the Longhorns' season-opening starting quarterback. (RICARDO B. BRAZZIELL / AMERICAN- STATESMAN)

If Texas coach Charlie Strong ever relents and allows Longhorn Network cameras into the football offices, fans might be surprised. There’s not much Hard Knocks-style drama to be found.

That’s certainly how it seemed Monday when Strong announced junior quarterback Tyrone Swoopes would start the season opener at No. 11 Notre Dame.

There was no public acknowledgement of any meeting with backup Jerrod Heard and quarterbacks coach Shawn Watson about the decision. UT officials handed out the depth chart Monday and … that was basically it.

“I wasn’t assuming anything,” Swoopes said, “but there wasn’t a big presentation, kind of like everybody thinks it would be.”

There probably didn’t need to be one, either. Swoopes looked better than Heard in the three practices open to the media in early August. Strong backed Swoopes at various points throughout training camp. The coach has said both will play against the Fighting Irish, a 9 1/2-point favorite. How much Heard will play remains unknown.

So for now, Strong is rolling with Swoopes, the same player who went 5-7 as a starter last season and drifted from dynamic (Iowa State) to dreadful (Arkansas).

“I’m convinced he’s won over the locker room,” Strong said. “Just the way he’s played and how he’s really come on. His leadership ability right now. Even the players will tell you that.”

Sophomore defensive tackle Poona Ford is listed ahead of veteran Hassan Ridgeway, who battled back issues in August. Redshirt freshman John Bonney is listed as the starting corner opposite veteran Duke Thomas.

But all eyes are on the quarterback position.

“I’ve said that the guy that wins the quarterback position has to win over this team,” Strong said. “And he’s won over the team. It’s going to be fun to watch him.”

Teammates said Swoopes was more vocal during training camp. He would hustle over to congratulate receivers after big catches or quietly counsel those who made mistakes.

Still, many Texas fans will roll their eyes and sigh. All they remember are Texas’ last two games. Swoopes had four interceptions and a fumble against TCU. Then the offense managed just 59 yards in the Texas Bowl debacle against Arkansas.

“I’ve said it before. People are going to think what they want to think,” Swoopes said. “I can’t really control that. All I can do is just control my play on the field, and hopefully I plan on being a lot better than I was in the past.”

The real question is can Swoopes take multiple hits, get up and keep moving? Last season, he admitted to being nervous at times, comments that most certainly have made their way to South Bend, Ind.

“That’s one thing I’ve been working on since last season, just not really dwelling on things I do bad,” Swoopes said. “Just learn from it and move on.”

All of the players Monday supported Swoopes. But what’s interesting is how they talked about Swoopes and Heard as equals. To hear the players’ versions, neither has a true, insurmountable advantage.

“I look at last year, and I get to play against him in practice everyday,” safety Dylan Haines said of Swoopes. “Last year, you see him make so many not-smart throws. Overthrows, throws into coverage.”

That’s not the case this year, Haines said. Swoopes is going through his progression of reads and using his safety valve option more. “He’s so much more improved as a quarterback,” Haines said.

Offensive guard Sedrick Flowers said, “Jerrod will get out there and make plays with his feet and his hands. But Tyrone will sit there in the pocket and dissect the defense with his passing game, and if he needs to, he’ll run. The way they play, they both get the job done with high confidence.”

Swoopes gets first crack at it against Notre Dame. How long he remains the starter is up to him.

“All the coaches and everybody has seen the work I’ve put in,” Swoopes said. “I feel like it paid off.”