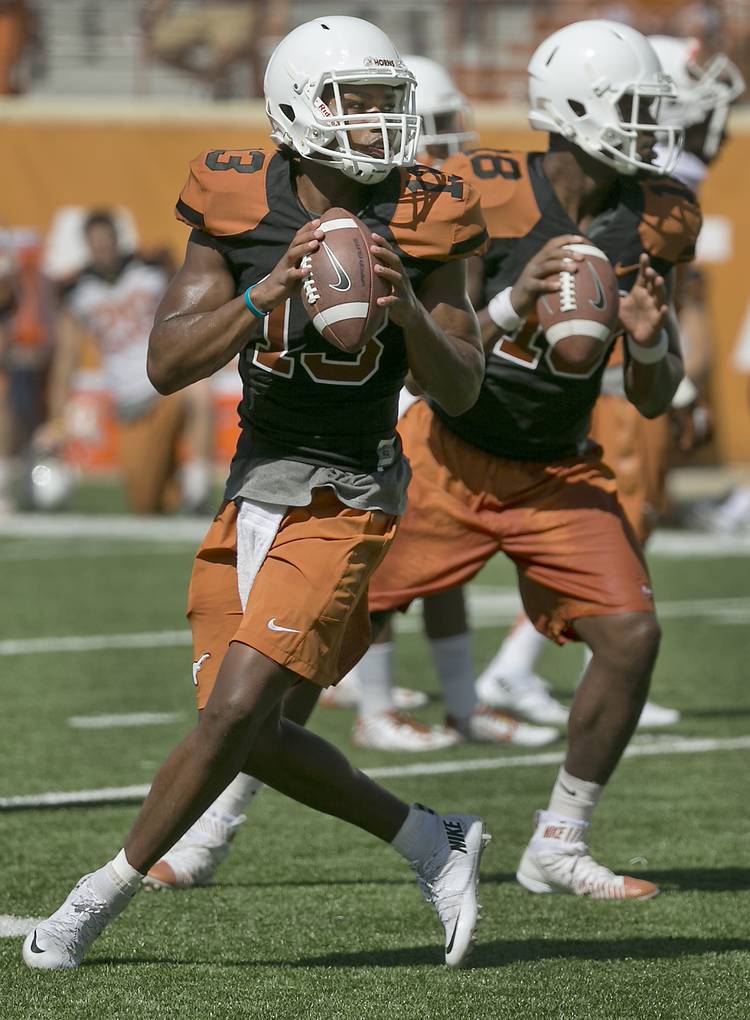 Tyrone Swoopes might have been a runaway winner in Texas’ quarterback competition, but that doesn’t mean coaches are ready to walk away from Jerrod Heard just yet.

On Tuesday, play-caller Shawn Watson spoke highly of Heard’s “upside” and confirmed that Heard is “a ways” ahead of freshman Kai Locksley for the No. 2 spot.

Heard is expected to make his college debut Saturday at Notre Dame, though it’s unknown as to when he’ll enter the game.

Watson said the competition hinged on Swoopes’ edge in experience as a 12-game starter in 2014.

After the spring, Watson and head coach Charlie Strong promised a competition at quarterback, but Heard never closed the gap on Swoopes. If the three practices open to the media are indication, he probably fell further behind.

Watson didn’t exactly instill confidence when he said “Jerrod is honestly about where Ty was a year ago.”

At Texas, he’s got two that fit that profile in D’Onta Foreman (241 pounds) and Chris Warren (232). Starter Johnathan Gray is on the light side at 211 pounds.

“I’ve always been a fan of the big back,” Watson said. “I love wearing people out with big backs. These guys, they both carry their pads really well. They’re explosive. They make you hurt when you tackle them. Great young talents. Both had great camps.”

This summer, Strong said he wouldn’t be opposed to Gray carrying the ball 25 to 30 times a game. Given Watson’s endorsement of Foreman and Warren, that would appear to be unnecessary.

Strong leading special teams: If Texas doesn’t improve in special teams, the boss man has no one to blame but himself.

“Coach Strong has kind of taken the reins on it,” senior Alex De La Torre said. “I can tell we’re putting more time and effort into it. I think we will be better.”

Templin put on scholarship: Walk-on wideout Ty Templin has been put on scholarship, Texas confirmed. Templin, a junior, is No. 3 on the depth chart at outside receiver. He had one reception last season, a 7-yard pick-up at Kansas.

Short yards: Coaching football is a small world. In his first season at Louisville, Strong demoted offensive coordinator Mike Sanford and replaced him with Watson. On Saturday, Strong will match whits with Sanford’s son, Mike Sanford Jr., Notre Dame’s offensive coordinator. … Marcus Johnson said he moved to inside receiver during camp at the behest of position coach Jay Norvell. Johnson continues to get glowing reviews from his coaches.

He won one for the Gipper, then coached Longhorns past Notre Dame