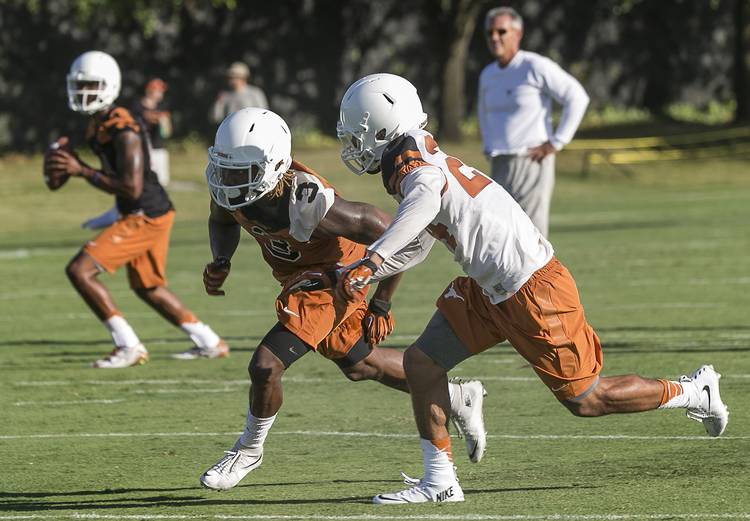 Sophomore Antwuan Davis and junior Bryson Echols received only cursory mentions throughout August whenever the topic shifted to the Texas cornerbacks.

Senior Duke Thomas was a known starter. The other side would get figured out eventually.

Then came Monday’s unveiling of the depth chart. Redshirt freshman John Bonney was named the starter at left cornerback ahead of Davis and freshman Kris Boyd.

Bonney is also listed as Texas’ starting nickel back, where he worked at throughout August.

The coaching staff may have high hopes for Boyd and fellow freshman Holton Hill. But Bonney has clearly done something to earn a lot of playing time.

“Duke and Bonney are going to share time at the nickel position,” coach Charlie Strong said.

Strong appears to like his choices when UT needs a fifth defensive back, a formation used extensively against Big 12 opponents. A possible lineup would be Thomas, Bonney, safeties Dylan Haines and Jason Hall and a fifth choice between Davis, Echols, Boyd or Hill.

For all the grumbling about last season’s 6-7 finish, not many realized that Texas had the best pass defense in the Big 12 and the 11th-best in the nation. UT allowed only 184.2 passing yards per game.

Freshmen linemen: It’s rather eye-opening to see all the freshmen names on Texas’ depth chart, especially along the offensive line.

Left tackle Connor Williams took on all comers during August and got into several post-whistle spats. Right guard Patrick Vahe didn’t appear to be slowed by offseason shoulder surgery and moved into the starting rotation the last two weeks.

Still, both players are about 10 months removed from facing high school opponents. Saturday night will be quite different.

“Just done tremendously well,” senior center Taylor Doyle said of both linemen. “I think it’s a great opportunity for them.”

Look on YouTube: Several UT players were asked what they knew of Notre Dame and whether they had seen the movie “Rudy,” which came out in 1993. The answer? Not many at all.

“I’ve never watched that movie. I’ve never seen it,” said quarterback Tyrone Swoopes, who like many of the Longhorns was born in the early 1990s. Haines, a former walk-on, believes he’s accomplished more than the real-life Rudy Ruettiger did for the Fighting Irish.

“But such a great story, and a story that gives that school a lot of the tradition,” Haines said.

Wickline update: The judge in the case between Joe Wickline and Oklahoma State has established a timeline for both parties. Witness lists should be exchanged by Oct. 5. Discovery in the case must be completed by Nov. 1. A pre-trial conference is scheduled for Dec. 17.

It’s believed the actual trial would not take place until January or February.

Texas-OU tickets: UT officials announced on Tuesday that Texas-Oklahoma game tickets are still available online at texassports.com. Tickets are $135. Sales are open to the general public, and no Longhorn Foundation donation is required.

Texas’ Tank Jackson is back to anchor defensive line