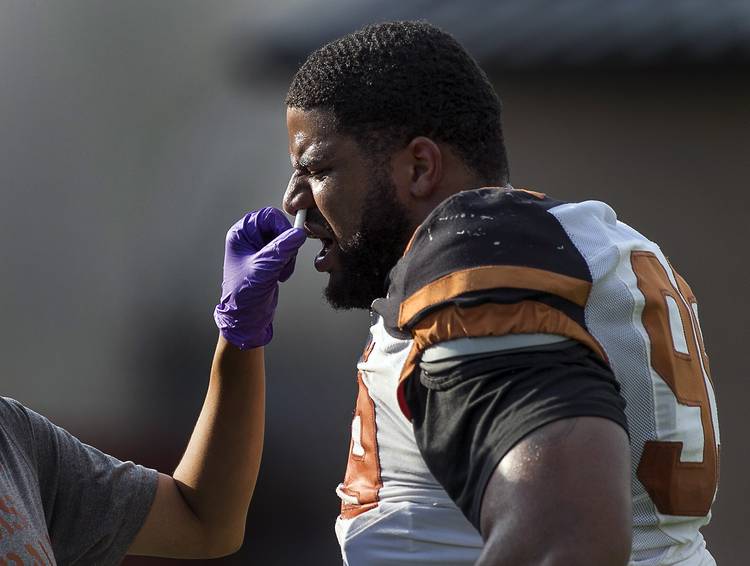 AUGUST 11, 2015 - Texas #99, Desmond Jackson, right, has plug put in his nose to stop the bleeding after getting a bloody nose during a drill at Longhorn practice held at the University of Texas' Frank Denius Field in Austin, Texas, on Tuesday, August 11, 2015. (RODOLFO GONZALEZ / AMERICAN-STATESMAN)

The scooter appeared to be a good time, but Tank Jackson insists it was not.

He has since returned the scooter. Not that he wanted to keep it.

“It wasn’t that fun,” Jackson said.

Not much was fun for the Longhorns’ nose tackle. Not the injury, which happened in the third game against UCLA and wiped out what projected to be a big senior year for him. And certainly not the one-and-a-half miles strength coach Pat Moorer made Jackson run on the first day he was cleared to do so.

Yes, that actually happened back in May. No rest for the rested.

“I was like, what in the world is going on?” Jackson said.

Jackson, who received a medical redshirt for a senior-year do-over, will make his 17th career start Saturday at Notre Dame. He recognizes it as a blessing.

“There were times when I wanted to give up,” Jackson said. “I appreciate things a lot more ’cause last year I couldn’t even walk for a couple of months. Just being able to walk again … I don’t take things for granted anymore.”

His teammates aren’t taking his return for granted, either. Jackson was primed to be a team leader last season, so one would think his perseverance to get back on the field would only heighten his locker room status.

Maybe Jackson will be a captain for Saturday’s game. Then again, maybe not. He famously botched the coin flip against UCLA, giving the Bruins the ball to start both halves. That insult was followed by, well, injury. The way Jackson tells the story, there was nothing he could have done to prevent it. He had just tackled running back Paul Perkins when a UCLA lineman fell and his knee brace collided with Jackson’s foot.

Jackson asked trainers to wrap the foot. He tried to stand up, but couldn’t. The official diagnosis was a Lisfranc fracture. Jackson underwent two operations, one to insert a plate and three screws, and a second to remove them in May.

“Tank is an older player who’s been around and he understands what it takes to get back,” Longhorns coach Charlie Strong said. “I told him we’re gonna need your leadership to help us lead this defense.”

With Jackson bolted to the sideline, his good friend Malcom Brown broke out and had a splendid season, earning All-American honors and getting drafted by the New England Patriots with the final pick of the first round. Had Jackson’s luck broken differently, perhaps it would be he, not Brown, with the stuffed trophy case and millions of dollars.

“If I would have finished the season healthy, I think my numbers would have been pretty decent,” Jackson said.

Texas’ deepest unit is the defensive line, so Jackson (career stats: 92 tackles, six sacks, 14 tackles for loss) should be able to ease back into things. Paul Boyette Jr. and Alex Norman can fill in. At the other inside spot, Poona Ford surprisingly edged Hassan Ridgeway. Chris Nelson also will play.

“Tank is definitely a leader on the team and the defense,” end Shiro Davis said.
Jackson’s teammates are looking forward to his return, and the return of his motivational speeches.
“It’s loud, and if you’re too close, you might get spit on,” Davis said.