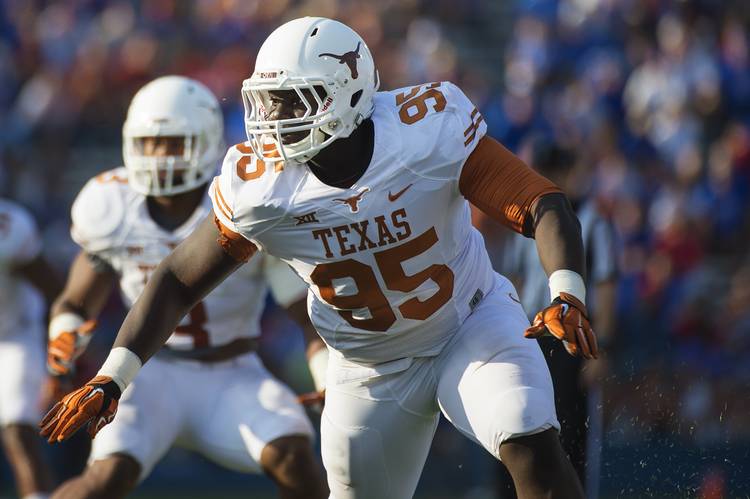 Texas defensive tackle Poona Ford played in nine games as a freshman during the 2014 season.

“Somebody starts the game, somebody finishes the game,” Bedford said on Wednesday. “The only people worried about who’s starting just don’t know.”

Ridgeway, thought to be UT’s best returning defensive lineman, missed practice time in August with a back injury. When asked if Ridgeway could follow in Malcom Brown’s footsteps, defensive line coach Brick Haley said, “This is the University of Texas. Why wouldn’t you expect that?”

Ridgeway had 43 tackles and six sacks last season. Ford had nine tackles and no sacks in nine games as a reserve.

Davis starting CB: Bedford said the Longhorns will likely start in a nickel formation against the Irish. Duke Thomas will be the nickel back, and Antwaun Davis and John Bonney will start at cornerback.

Eyes on Malik: Freshman linebacker Malik Jefferson finally gets the chance to showcase himself after being the state’s No. 1-rated recruit. Jefferson played outside linebacker at Mesquite Poteet, and he’ll line up as UT’s middle linebacker.

“My expectations for him, if he just gets lined up, we just won a battle,” Bedford said. “After that, I can’t tell you what’s going to happen. If he runs to the ball and hits, we’re in great shape. If he jogs to the ball and don’t hit, he’s on the sideline just like anybody else.”

The other Malik: Notre Dame quarterback Malik Zaire reminds Bedford of Russell Wilson for his ability to maneuver in the pocket and makes things happen with his feet.

Zaire played in seven games last season and completed 21 of 35 passes for 266 yards and one touchdown. Irish fans are excited about Zaire’s potential in the open field. He averaged 5.7 yards per rushing attempt.

Short rotations: Bedford said he’ll realistically use only 20 players against the Irish. Most of those are listed on the two-deep roster.

Templin had a 7-yard catch last season against Kansas. Ashby is stepping into the role vacated by Nate Boyer, who recently spent time with the Seattle Seahawks.

He won one for the Gipper, then coached Longhorns past Notre Dame

Texas volleyball to host No. 4 team — both of them