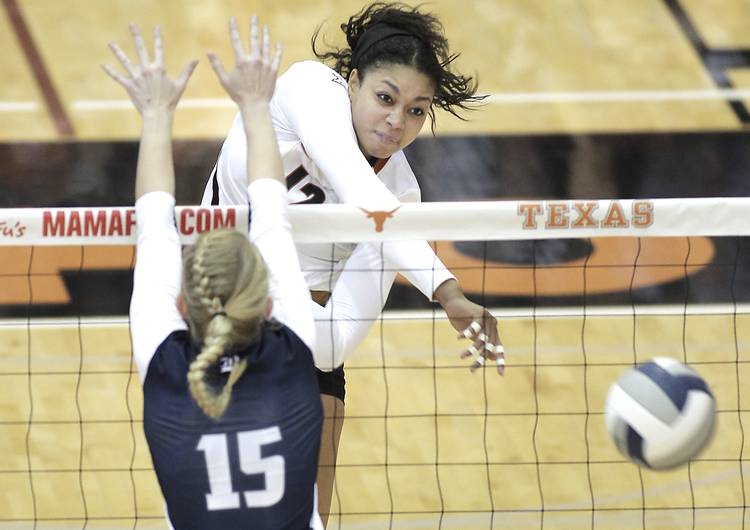 The University of Texas Longhorn swill take on two Top-5 opponents this weekend for the VERT Challenge. (Erich Schlegel/Special Contributor)

After opening the season with three inferior opponents, the degree of difficulty is set to increase considerably for the third-ranked Longhorns.

They’ll play the nation’s fourth-ranked team. Both of them, in fact. Florida and Nebraska, which share the fourth spot in this week’s Top 25, will visit Gregory Gymnasium for the VERT Challenge. Texas plays Nebraska on Friday, then Florida on Saturday. No. 11 Oregon also will be in town, but won’t face Texas.

This is precisely the course Jerritt Elliott set out for his team. Get comfortable one week. Get uncomfortable the next.

“We want to win, but this is more of a test about where we are emotionally and to see how we handle the stressful situations,” Elliott said. “I think Nebraska and Florida want to see that from their teams as well.”

Both are rematches from 2014. Last September, Texas went to Lincoln and took down Nebraska in five sets to remain unbeaten at 8-0. Florida came to Austin on the final day of the regular season and spoiled senior night for the third-ranked Longhorns, in five sets.

Nebraska and Florida both advanced to the regional finals (Elite Eight) of the NCAA tournament.

Bad news for Texas: Florida’s Alex Holston, who had 29 kills in last year’s meeting, is still just a junior. In road wins last week at James Madison and American, Holston had 33 kills on 76 swings.

The challenge increases this weekend.

“Both (matches) are going to be a big-time test for us,” Elliott said. “Completely different physicality of the game, different speed of the game, probably different ball control. It should be fun. It’ll give us a real mark in terms of the areas we need to work on for the remainder of the year.”

Nwanebu still out: Elliott said there’s no timetable for the return of Ebony Nwanebu, the USC transfer and opposite hitter who is sidelined with a bad back.

“It would be nice to go sooner rather than later, but there’s potential (it will be later),” Elliott said. “You’re unsure until she gets on the court a little bit. She hasn’t been swinging at all.”

As of Wednesday, 1,299 tickets had been sold, up from 1,120 last year. Hank said he expects sales to continue through next weekend’s Texas Classic and for the increase to reach another four or five percent. Ticket prices have increased by various amounts, except for the cheapest seats which remain $90.

Revenue from ticket sales has risen by 25 percent.

Elliott has said he’d like a sellout at every home match. Texas has ranked in the top 11 nationally in attendance in each of the last nine seasons and was eighth in 2014.

Spencer signs with Nike: Former Longhorns runner Ashley Spencer signed a professional contract with Nike over the summer and is training to regain the form she had when she won a pair of NCAA 400-meter outdoor titles while competing for Illinois.

Spencer never got a fair shake at Texas due to a hip injury she sustained her junior year and was unable to defend her 400 crown. She finished seventh as a senior.

“I feel like I was ready to go that fast, but I don’t think my body was ready for it,” Spencer said. “I’ve shown what type of athlete I can be in my first two years of college. I think once I get back into it, I’ll get back to being the athlete I know I can be.”

Spencer made the semifinals at this summer’s U.S. nationals, her first event competing as a professional.
“Right now the plan is to continue with the 400,” Spencer said. “I could tap into other avenues. I pride myself on being a very diverse athlete. I can be competitive in a lot of sprint events, and even hurdles.”

Texas notebook: Ford or Ridgeway? Bedford not worried about who starts