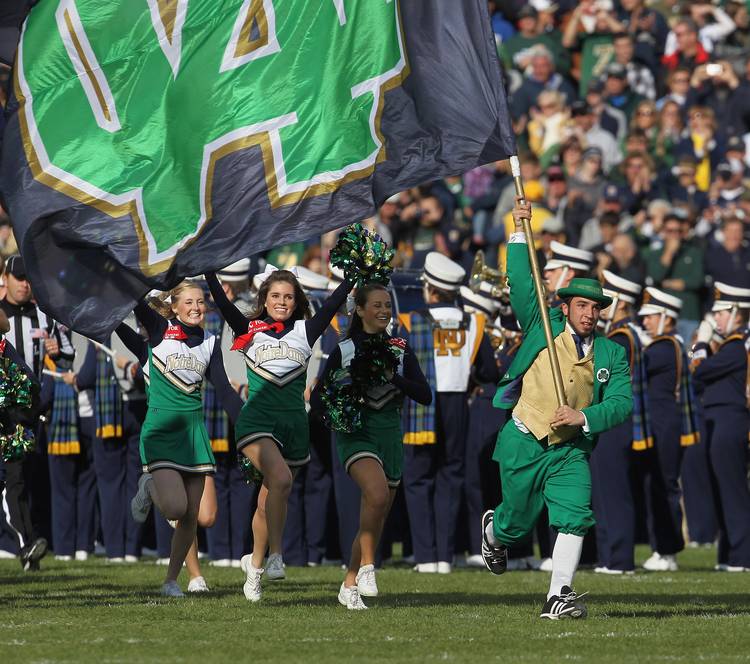 The leprechaun and cheerleaders for the Notre Dame Fighting Irish run onto the field before a game against the Navy Midshipmen at Notre Dame Stadium on October 29, 2011 in South Bend, Indiana. (Photo by Jonathan Daniel/Getty Images)

It’s shocking how much history repeats itself.

Texas had a lousy football team in 1989. Coach David McWilliams suffered through a 5-6 campaign and then spent the offseason weeding out players who didn’t belong.

“I call ’em riders and eaters,” said Brian Jones, an All-Southwest Conference linebacker as a senior in 1990. “All they’d do is ride the Greyhound and eat the chicken fried. But they did nothing to help the team succeed. We had a ton of riders and eaters on that (’89) Texas team, guys that couldn’t hack it.”

Those who stayed grew closer as a family. It’s been 25 years since the 1990 Texas squad went to Happy Valley and knocked off No. 21 Penn State in the season opener, which kick-started the famous 10-2 “Shock The Nation” Tour.

“It was a cool feeling to give the fan base something to believe in, especially when they weren’t expecting it,” said Jones, now a New York-based TV and radio personality for CBS Sports.

Can Charlie Strong and the unranked, underdog Longhorns do the exact same thing in Saturday’s season opener at No. 11 Notre Dame? Can Texas once again shock the nation?

Forgive the millennials who don’t know their Texas history. They don’t know Notre Dame history, either. Quarterback Tyrone Swoopes said he had not seen the movie “Rudy,” and frankly, acted like he’d never even heard of it. That might be a good thing, actually.

Texas is slated to start five freshmen, including two on the offensive line, and a handful of redshirt freshmen should see playing time. The first-team offense and defensive units for Notre Dame features 22 players who average 12 career starts.

Still, many consider this a matchup of college football royalty. The Fighting Irish have 882 all-time victories, No. 2 in college football history. The Longhorns are right behind, at 881. Both teams have been playing football for at least 122 years.

“You think about it, we’re at the University of Texas. Look what we have,” said Strong, who was a Notre Dame assistant from 1995-98. He’s been surprisingly upbeat and confident the last two weeks. This was the same coach who lowered expectations last year by saying Texas wouldn’t play in the national championship game nearly five months before the season even began.

“I just explained to our team, let’s not wait to wake up Saturday morning and say we have confidence,” Strong said. “It can’t happen on Saturday morning. It’s going to take each and every day.”

Just like McWilliams did, Strong spent last year removing “riders and eaters” from the locker room. Now, several players said there are no obvious cliques or “locker room lawyers,” as coaches like to say.

Strong texted dozens of veterans during the offseason and asked them to come to his office. When players arrived, they walked into Strong’s large conference room. All nine assistants were waiting. Running back Johnathan Gray called it the “hot seat.”

It was an open dialogue between player and staff, and by all indications, there were some hard truths told. Players left the room knowing full well where they stood and how they needed to improve.

“That was pretty intense,” defensive end Naashon Hughes said. “You didn’t know it would be all the coaches and all the staff there.”

In many ways, even Daje Johnson’s ill-advised rap single brought the Longhorns closer. They all listened to it and had opinions. “I don’t think Drake is going to get in football pads and go to war against me,” said backup quarterback Jerrod Heard, who is expected to play today, too.

Earlier this week, prized freshman linebacker Malik Jefferson tweeted a photo that appeared to show Strong standing on a step stool during a press conference. “He didn’t drink his milk,” Jefferson wrote atop the photo believed to be created by Texas A&M fans.

He didn't drink his milk pic.twitter.com/zVItO1nNpe

Photoshop works wonders, and it brought the house down inside Moncrief. Jefferson then tweeted, “No he’s not that short.”

“I don’t even know what that was, but I saw it. I thought it was real,” Hughes said.

Connor Williams, the freshman starting at left tackle, tweeted out, “Shots fired, be ready for a 5:00 wake up call.”

The fact Jefferson, who has yet to play a single down, tweeted something that pokes the head coach is amazing, really. That shows what kind of leader Jefferson has become and how loose the Longhorns may really be.

Don’t think for a second Strong has become some pushover. Gray said there are two head coaches, a jovial Charlie Strong and his alter-ego, “Chuck.”

“Chuck is the person you don’t want to see,” safety Jason Hall said.

Charlie Strong and Chuck both hope the Longhorns go out and play loose at Notre Dame Stadium. They’re tired of hearing about “59 yards,” the total offense generated in the Texas Bowl. They’re sick of hearing about last year’s 6-7 record.

The Longhorns want to do something shocking.

“I hope we kick off first, put the defense out there and let’s see what happens,” defensive coordinator Vance Bedford said. “I got my life vest on, got my parachute on. I’m ready for it all.”

Texas vs. Notre Dame: The Eyes of Texas will be upon whom?