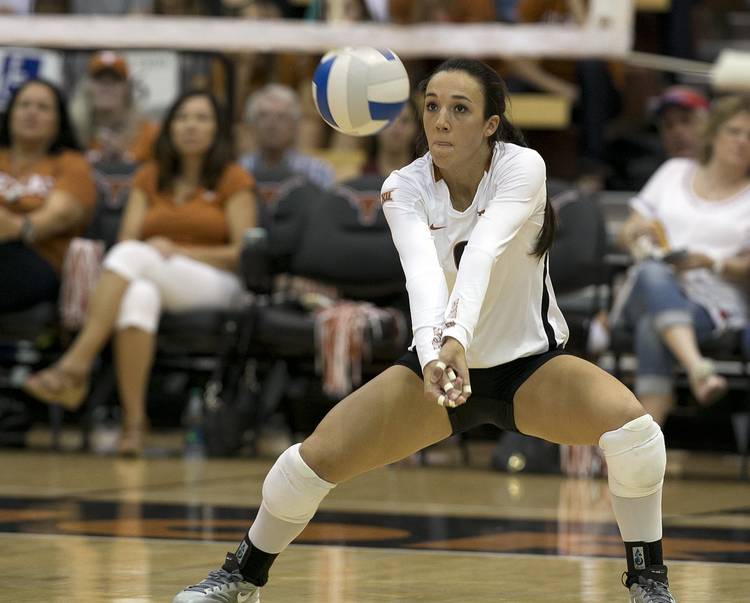 Making her debut for Texas, Nwanebu, a high-profile transfer, delivered 22 kills in a five-set victory over Nebraska in the opening match of the Vert Challenge at Gregory Gym. A 6-foot-5-inch junior, Nwanebu was named the 2013 national freshman of the year after helping Southern California to an NCAA regional final that season.

As a sophomore, she averaged 3.12 kills per set and led USC to the second round of the NCAA tournament. She also struggled with off-the-court issues, including depression and anxiety she detailed in a lengthy blog post titled “A jumbled explanation.”

Nwanebu considered multiple programs after leaving USC, including Nebraska, but she picked Texas and a return home to the state where she won three UIL state championship while at Lovejoy High School in Lucas.

“It was exciting,” Nwanebu said. “I was looking forward to playing Nebraska.”

She would have played last week, but back issues pushed Nwanebu’s debut back to this showcase that features four of the top-11 teams in the American Volleyball Coaches Association’s top-25 poll.

As expected, Nebraska offered the toughest challenge Texas had faced this season.

Playing against Rice, California-Irvine and LSU last week in the American Campus Classic, Texas didn’t drop a set and outscored its opponents 225-148. Against Nebraska, though, Texas was pushed from the start.

The Huskers matched the Longhorns point-for-point until a 12-1 run made the difference. A similar run, this time 7-0, was the difference in the third set and dissipated Nebraska’s momentum from the second set.

In the fourth set, Nebraska battled back from a 20-18 deficit to force a fifth set.

“They tested us,” Elliott said. “We needed that.”

In the fifth set, an overturned call sparked the Longhorns and the announced crowd of 2,721 fans.

The initial call was that Texas’ Amy Neal had hit the ball into the net, which would have tied the set at 11. After a challenge by Elliott, though, it was ruled that a Nebraska player touched the ball, giving Texas a 12-10 lead.

“It just got away from us there at the end,” said Nebraska coach John Cook. “That’s the thing I told the girls. You have to have players that when it matters most, make plays … that’s what Texas had. We’ve got to learn how to do that.”

After that reversed call, the Longhorns went on a 3-1 run to end the match.

Neal finished with 12 kills while Chiaka Ogbogu had had nine kills and eight blocks.