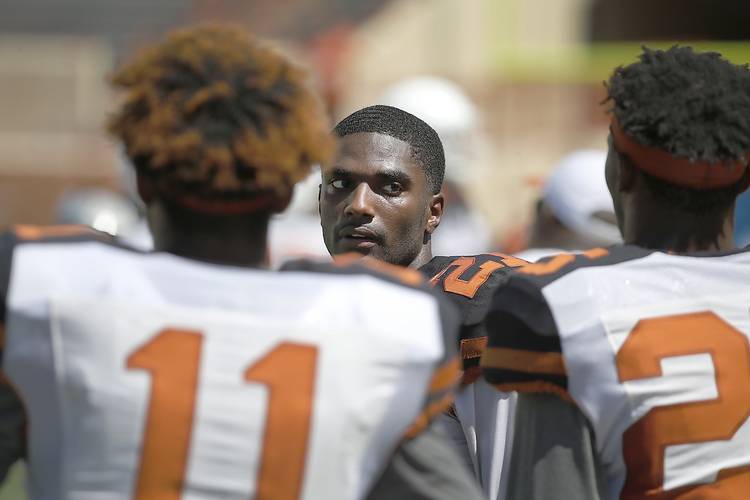 Five key matchups to look for on Saturday night:

TEXAS’ DEFENSIVE BACKS VS. WILL FULLER

As a sophomore last year, Fuller broke out with 1,094 yards and tied a Notre Dame record with 15 touchdowns. He’ll have the undivided attention of a Texas secondary that ranked 11th nationally against the pass, but is without NFL draft picks Quandre Diggs and Mykkele Thompson. Duke Thomas is the undisputed leader of the defensive backs, but won’t be able to handle Fuller by himself. That means a difficult debut assignment for young corners John Bonney, Antwuan Davis, Kris Boyd, Davante Davis and Holton Hill. They all could play at some point. Safeties Dylan Haines and Jason Hall enter their second season as starters, but the book on Hall is he doesn’t defend the pass well.

Arguably each team’s strongest unit, the heavyweights will swing away in the trenches. The Irish return three linemen — Ronnie Stanley, Nick Martin and Steve Elmer — who started every game last year. They’ve combined for 67 starts in their career and average 310 pounds. Texas counters with a defensive line that will rotate nine to 10 players. Nose tackle Desmond Jackson makes his return from a foot injury he suffered in the third game of last season.

OUR MALIK VS. THEIR MALIK

Notre Dame quarterback Malik Zaire can move around. But so can Malik Jefferson, Texas’  freshman middle linebacker. Look for Jefferson to keep tabs on Zaire, who averaged 5.7 yards on 33 carries and scored twice in 2014. Zaire (222 pounds) is a load and is always looking for a reason to run.

Charlie Strong knows how he’d game-plan against true freshmen linemen Connor Williams (left tackle) and Patrick Vahe (right guard) — he’d blitz them. And then blitz them some more. Ready or not, Williams and Vahe are being thrown into the mix to upgrade a unit that was, in a word, dreadful in 2014. Don’t expect Irish defensive coordinator Brian VanGorder to go easy on the newbies. All-American linebacker Jaylon Smith (3.5 sacks in 2014) will look to inflict damage. So will NFL hopeful Sheldon Day at defensive tackle.

For the same reasons as above, expect the Irish to send pressure after Dickson, a freshman punter whose gridiron experience is limited to Australian Rules Football. Dickson, of Sydney, Australia, was wildly inconsistent the handful of times media got to see him kick in practice. He’d typically follow a booming effort with a shank. The Irish did not return a punt for a touchdown in 2014 and graduated their top two returners. Freshman C.J. Sanders is listed ahead of Fuller on the depth chart.

Nwanebu sparks No. 3 Texas to five-set victory over No. 4 Nebraska