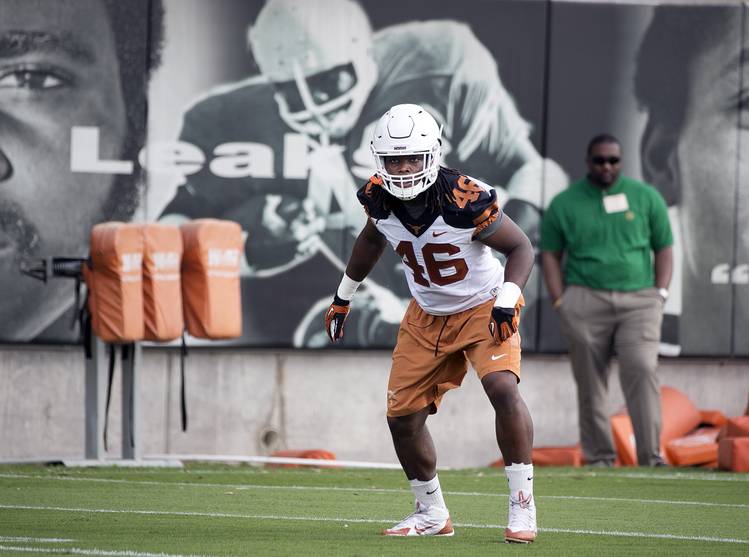 1. HOW MANY FRESHMEN WILL PLAY?

2. HOW WILL MALIK JEFFERSON PERFORM?

His is the most anticipated debut for a Texas freshman in some time. Jefferson, the state’s No. 1 recruit last year from Mesquite Poteet, enrolled early this spring and made several big plays in the Orange-White scrimmage. But he also made mistakes, and graded out the lowest among all linebackers. He was recruited as an outside linebacker, but will start on the inside due to Dalton Santos’ injury.

3. WHEN WILL JERROD HEARD ENTER THE GAME?

Heard will play, but when? Longhorns coach Charlie Strong said there is a plan, but he wouldn’t reveal it to the media this week. This much is known: Tyrone Swoopes will start. It’s anyone’s guess when Heard, a redshirt freshman, will get his first shot at running the offense or how long he’ll stay on the field.

4. HOW WILL MICHAEL DICKSON PERFORM?

Early observations were frightening. Dickson, a freshman punter from Australia, hit an errant kick onto Red River Street from the practice field in the Longhorns’ first practice. But to be fair, he also got rattled off a couple of 50-yarders.

5. HOW MANY BIG PLAYS WILL THE TEXAS OFFENSE MAKE?

And by big plays, we’re talking about gains of 20 yards or more. Last season, the Longhorns ranked 101st nationally in that category, managing just 47 gains of 20-plus yards. Explosive plays will help measure the effectiveness of Texas’ new spread offense.

Texas vs. Notre Dame: The Eyes of Texas will be upon whom?