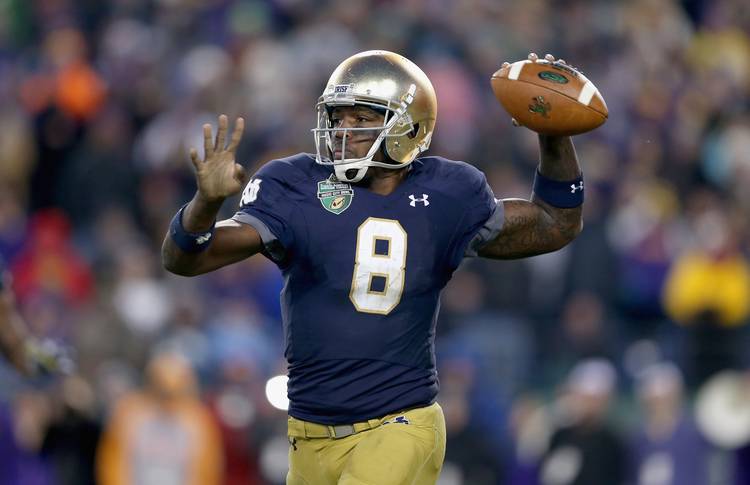 Malik Zaire #8 of the Notre Dame Fighting Irish passes the ball against the LSU Tigers during the Franklin American Mortgage Music City Bowl at LP Field on December 30, 2014 in Nashville, Tennessee. (Photo by Andy Lyons/Getty Images)

On Saturday at Notre Dame, the eyes of Texas will be upon …

His emergence against LSU in the bowl game forced multi-year starter Everett Golson to transfer out (Florida State). Zaire, who throws with his left hand, reminds Texas defensive end Shiro Davis of TCU’s Trevone Boykin with his swift running. Making his first start in the bowl game, Zaire had 96 rushing yards and scored on the ground.

A big play guy who should test Duke Thomas and whoever else lines up in the secondary for Texas. Fuller had 15 TD catches in 2014, tying Golden Tate, Jeff Samardzija and Rehma McKnight on Notre Dame’s all-time list. Fuller (6-0, 184) finished with 76 catches and 1,094 yards.

A second-team All-American who has started all 26 games since he arrived on campus. Smith (6-2, 235) was the Irish’s defensive player of the year in 2014 after registering 112 tackles and 3 1/2 sacks. Expect him to test a young Texas line that will start two true freshmen.

Can young Texas once again ‘Shock’ the nation, Notre Dame?