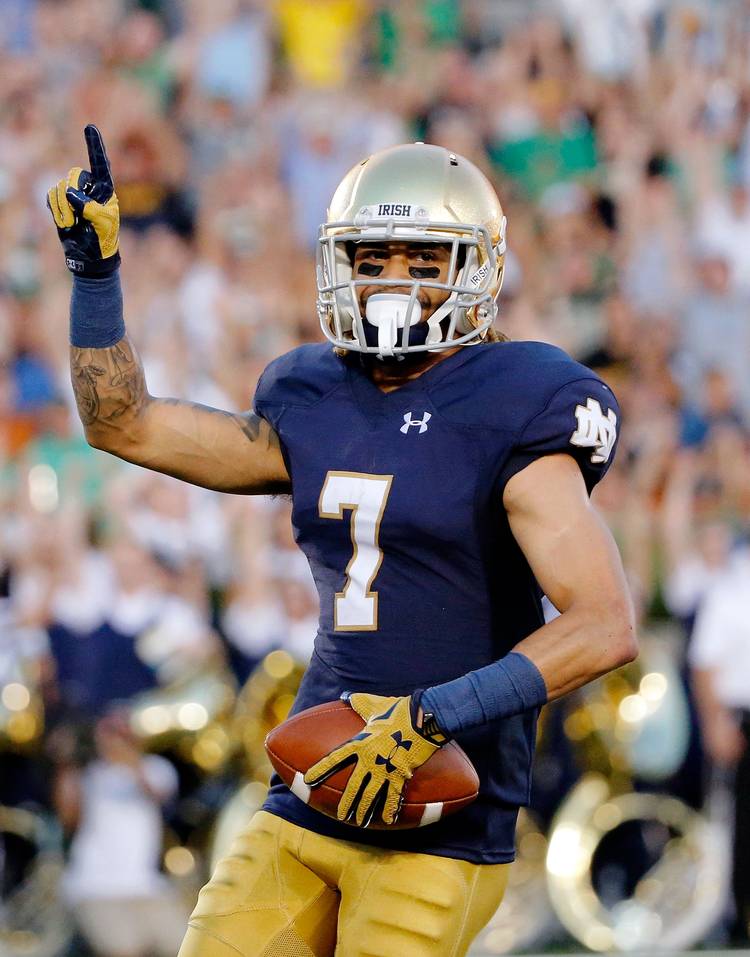 Will Fuller of the Notre Dame Fighting Irish celebrates after making a touchdown reception against the Texas Longhorns during the first quarter at Notre Dame Stadium on September 5, 2015 in South Bend, Indiana. (Photo by Jon Durr/Getty Images)

WHY NOTRE DAME (1-0) WON: Malik Zaire picked up right where he left off, making plays just as he did against LSU in the bowl game. He threw as many touchdowns (3) as he did incompletions. He completed an amazing 19 of his 22 passes, torched Texas’ secondary for 313 yards and three touchdowns, and didn’t commit a turnover. The Irish did all this without their top running back, who was injured in the first quarter and never returned.

WHY TEXAS (0-1) LOST: The Longhorns picked up right where they left off, frustrated offensively, roughed up defensively and with questions at quarterback. There were all sorts of alarms going off. Tyrone Swoopes (7 of 22, 93 yards) struggled. Again. The offensive line had a long night. Charlie Strong said Texas would have to run the ball in order to win, and it didn’t. Johnathan Gray, in fact, had only eight carries. Of the 12 offensive possessions, eight were three-and-outs.

THE EYES OF TEXAS: … were on three specific Fighting Irish — Zaire, who had looked so good in Notre Dame’s bowl game; wide receiver Will Fuller, coming off a 1,000-yard season; and linebacker Jaylon Smith, a second-team All-American who has started all 26 games since he’s been on campus. How’d they do? Zaire schooled the Texas defense (313 passing yards, 3 TDs, no picks, only three incompletions). Fuller had a big night, with 7 catches for 142 yards and a pair of TDs. And Smith was a force all night, with a couple of big-hit stops.

GAME BALLS: Offense — Let’s go with Nick Rose, who not only provided the Longhorns their only points of the game, but also booted a pair of 52-yard field goal tries that both were taken away because of Irish timeouts. Defense — Malik Jefferson looked as good as advertised, with nine tackles and 2.5 tackles for loss. A great debut.

(1) That 48-yard pass from Swoopes to John Burt. As Texas’ offense goes, it was the Longhorns’ one shining moment.

(2) Let’s hear it for those freshmen. Jefferson, Burt, Michael Dickson and Edwin Freeman all made plays.

(3) Daje Johnson caught six passes. It was nice to see him involved in the game plan again.

(1) This game was over with enough time in the second half to give Jerrod Heard another series or two. The Texas answer as to why not came from Shawn Watson, who told the Longhorn Network after the game that Heard wasn’t used in the second half because Swoopes was competing so hard.

(2) Who needs offense? Not Texas, apparently. The Longhorns have produced 20 points over their last three games, all losses to Notre Dame, Arkansas and TCU.

(3) What an ugly way to end the game. Freshman Breckyn Hager made a great stop on a Notre Dame running back, but drew the ire of the Notre Dame Stadium crowd with his not-flagged taunting after the hit. And on the very next play, defensive end Derick Roberson was called for a late hit out of bounds, igniting tempers again. This was all in the final minute, by the way, with the score 38-3.

A GAME OF FIRSTS:

First third-down opportunity for Texas: An incomplete pass, on third-and-3.

First Jerrod Heard “uh-oh” moment: Heard’s second play was a nice run to the outside. But he got shake up on the tackle and headed back to the sideline.

Only score: Nick Rose’s field goal in the third quarter.