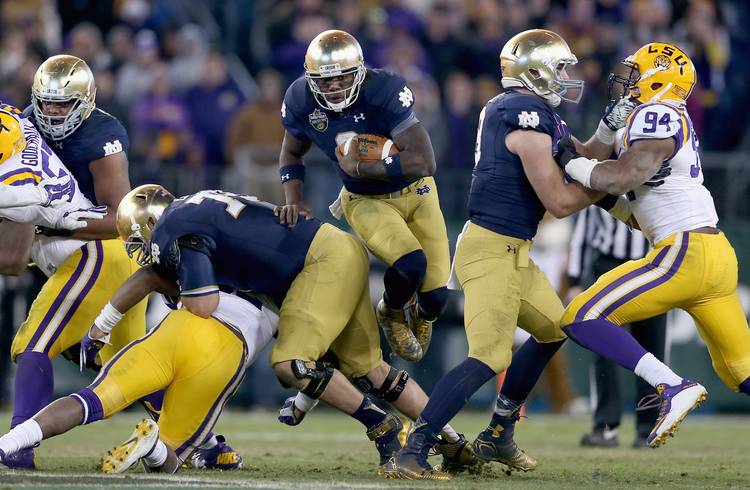 Ryan Autullo: Lose if you must, just don’t lose big

Lose if you have to, but don’t get blown out. Don’t get humiliated. Don’t do against Notre Dame what you did against Arkansas and TCU.

A third straight ugly loss wouldn’t sit well with anyone, but — gasp — it could happen. Notre Dame is among the most seasoned teams in the nation, splattering returning starters all over the field. With 14 freshmen on the two-deep, Texas will be violating curfew by the time this game is over.

The program needle is pointing in a positive direction, but teams do not win with freshmen. But if Texas can be competitive with freshmen, Saturday will be a success.

This is my fourth trip to Notre Dame. The first came in December 1977 to advance Texas’ 1978 Cotton Bowl matchup, when I spent several days in South Bend getting shown around campus by a sports information assistant who later became Joe Montana’s first wife.

I’ve since covered a Texas and Texas A&M game in front of Touchdown Jesus and I believe Texas’ only hope in staying with the Irish is turning the school’s iconic mural into Field Goal Jesus.

I expect a tight first half but a clear-cut Notre Dame win with a strong second half.

Brian Davis: A lack of knowledge, but also a lack of intimidation

Charlie Strong appears to know something we don’t. That’s the vibe he gives off, anyway. He certainly feels much better about his situation now than he did last September.

On paper, the facts stack up in Notre Dame’s favor — the Irish have a boatload of veterans while the Longhorns are green all over, Malik Zaire has lots of hype while Tyrone Swoopes has lots of … oh, I don’t know … hope?

But Texas’ freshmen don’t realize they’re going up against mighty Notre Dame. We learned this week many don’t even know who Rudy was, much less seen the movie. I’m betting they won’t be intimidated by Notre Dame Stadium, either.

Texas will hang tough, but Notre Dame has too much experience. No luck required.

Cedric Golden: Have you Heard the word? Athleticism rules

From everything I’ve been told, Jerrod Heard hasn’t grasped the offense as quickly as coaches had hoped. As a result, the quarterback competition was pretty much over before it really started.

Tyrone Swoopes is the guy and deserves to be the starter. That doesn’t mean Heard isn’t the better athlete. He is. So don’t be shocked to see him run for 15-20 yards on a scramble sometime Saturday. Guys like him are better when plays break down. Athleticism is often rewarded in college football, and Heard has it in spades.

Nwanebu sparks No. 3 Texas to five-set victory over No. 4 Nebraska