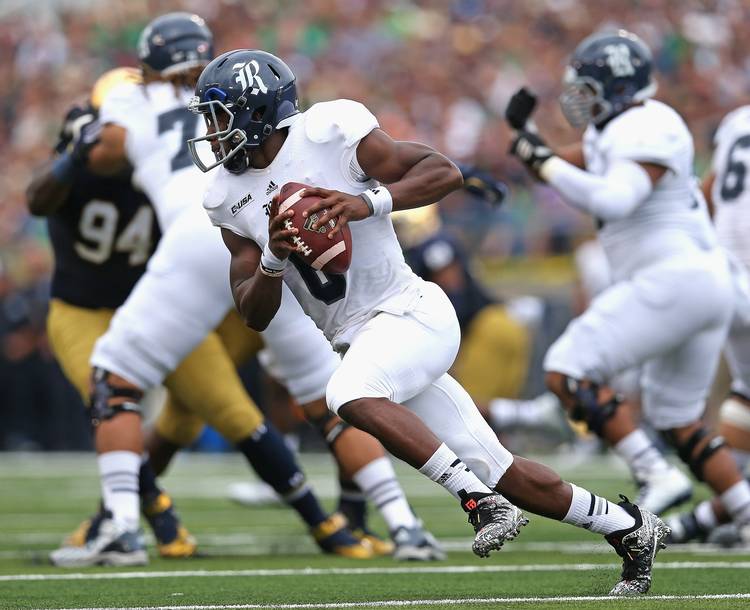 Rice quarterback Driphus Jackson looks to spring the upset of the Texas Longhorns this Saturday at Royal-Memorial Stadium. (Photo by Jonathan Daniel/Getty Images)

NEXT UP FOR THE HORNS

About Texas: The Longhorns opened with a 38-3 loss at No. 11 Notre Dame. It was the second-most lopsided season-opening loss in UT history, and the worst since 1988. Texas had eight first downs, produced 163 yards of total offense, and rushed for only 60 yards, averaging 2.1 yards per carry. The lone scoring came on Nick Rose’s 41-yard field goal. Texas was only 2 of 13 on third-down conversions.

About Rice: The Owls opened with a 56-16 win over FCS-level Wagner State. Quarterback Driphus Jackson struggled in the passing game — 10 of 19 for 123 yards with one touchdown and an interception — but added 79 rushing yards and another score. Junior running back Darik Dillard had 15 carries for 93 yards and two touchdowns, and redshirt freshman Austin Walter led all rushers with 109 yards. Rice limited Wagner State to only 2-of-12 on third-down conversions.

About the series: It’s been a Longhorns-friendly rivalry between the two old Southwest Conference schools. Texas leads the all-time series, 71-21, and the Owls haven’t beaten Texas since 1994. There have been 12 straight Longhorns wins between then and now.

The last time: Texas beat Rice 34-9 at DKR to open the 2011 season, the front end of a 4-0 start for the Longhorns. Malcolm Brown rushed for 87 yards, which was the best debut performance by a UT freshman running back since 2005 (Jamaal Charles). Garrett Gilbert passed for 239 yards and a touchdown, wide receiver Mike Davis totaled a career-high 115 receiving yards, and the defense limited Rice to three field goals.