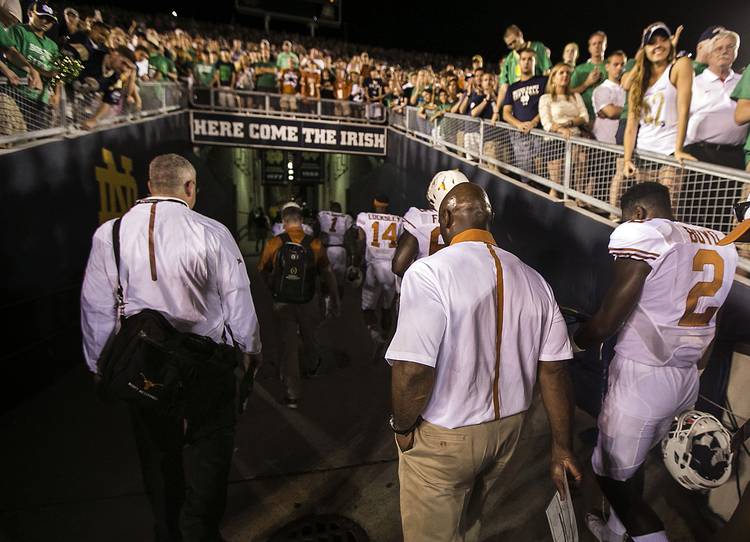 FIRST QUARTER
Notre Dame: Will Fuller 16-yard TD pass from Malik Zaire (Justin Yoon PAT), 6:29 left
The drive: 7 plays, 55 yards, 3:28
Key play: Tarean Folston’s 15-yard run sparked a series of nice gains. It also was his last run; he was injured for the play, then ruled out for the game soon after.

Notre Dame 14, Texas 0: An up-tempo system works best when yards are gained. The Longhorns stayed true to their promise of moving quickly, but the pace appeared to cause confusion. More than once, Marcus Johnson threw up his hands and motioned to the sideline. Texas gained one first down and 28 total yards in the quarter. Two Tyrone Swoopes-led possessions produced nothing, so Jerrod Heard got a crack right before the quarter ended. Tackling was poor. And Texas didn’t get off blocks. Bad combination. Still, it was an impressive debut for Malik Jefferson. He had two tackles on the opening drive, both coming near the line of scrimmage.

Halftime — Notre Dame 17, Texas 0: We were promised an improved offensive line. Uh, care to explain, Joe Wickline? Texas’ front five was overpowered. Armanti Foreman lost 10 yards, though the loss was nullified by a Notre Dame penalty. Heard, under pressure, ran into Johnathan Gray and was dropped at Texas’ 1-yard line. Later, Taylor Doyle blew a block and Swoopes was sacked. Nick Rose was 2 for 3 on the same field goal attempt from 52 yards. Rose drilled the first two, but each time Irish coach Brian Kelly called a timeout to ice him. Had either counted, Rose would’ve had a new career-long kick (51 is his standard). The third time was a charm for Kelly; Rose’s third attempt went wide left right before halftime.

Notre Dame 31, Texas 3: The Longhorns got on the board with Rose’s 41-yard field goal, but it came only after Swoopes threw high for Armanti Foreman on third down. Burt’s 48-yard catch was his only one of the game. A big question coming into the night was who would defend Notre Dame receiver Will Fuller. Turns out no one was up for the challenge. He blew past cornerback Duke Thomas, who received no deep help from safety Dylan Haines, and the result was a 66-yard score. Tensions started brewing on the Texas sideline. After a Daje Johnson jetsweep went nowhere on third down, Gray pointed forward and implored coaches to run up the middle. At the time, he had five carries for 26 yards. Frustration continued after the play when left guard Sedrick Flowers was penalized for throwing a punch.

Final — Notre Dame 38, Texas 3: Zaire was superb all night, with three TD passes and three incompletions. He exited the game with 10:55 to go, and sophomore backup DeShone Kizer attempted only one pass as the Irish melted the clock. Breckyn Hager’s debut will live in infamy; the freshman linebacker was pulled from the game after he stood over and taunted a Notre Dame ball carrier. Linebackers coach Brian Jean-Mary was furious. And there was a bad sign for Texas’ receiving corps — Marcus Johnson missed the entire second half with an ankle injury, and was seen leaving the field wearing a protective boot.