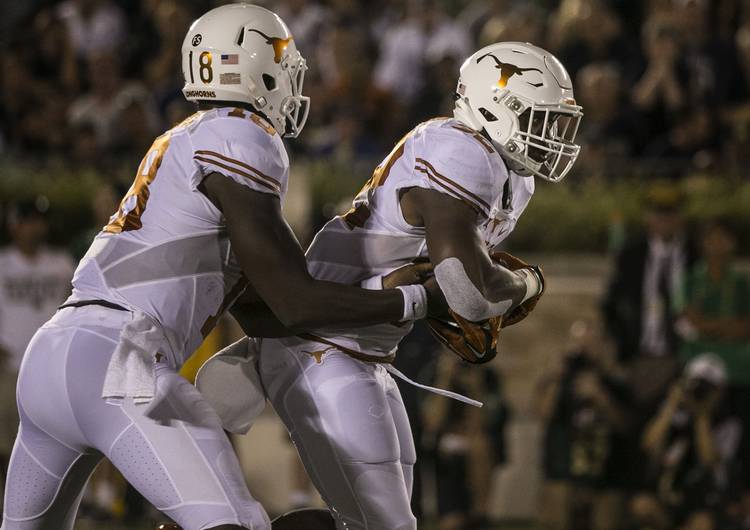 He’s only giving in to this up-tempo stuff because that’s what today’s players are comfortable doing.

Strong said the game plan to beat Notre Dame was to play solid defense and run the ball. But the Longhorns never gave the ball to their senior leader on the first two drives. Never got him involved at all when it counted, really.

Johnathan Gray was nothing more than a frustrated bystander in Texas’ 38-3 loss at Notre Dame Stadium.

Gray never speaks out of school; he always touts the company line. But his body language was clear. Gray was furious about not getting the ball more.

“The game plan, what coach (Shawn) Watson had for us, was run the ball, keep the ball moving fast and get guys open in space,” Gray said. “We’ve got to do what the coach calls. We would like the run the ball more. Whatever coach calls, we have to execute.”

In the first half, Gray had only three carries for 18 yards. He had only five carries after halftime. It didn’t take long to register the final tally: 40 yards.

Gray didn’t even catch a pass coming out of the backfield. Daje Johnson, John Burt and Andrew Beck were the only UT players who caught any passes all night.

Swoopes ended up doing most of the rushing on broken plays. He was credited with 10 carries for 17 yards. D’Onta Foreman and Chris Warren both saw playing time, but did nothing of consequence.

“From what they showed us in camp, those guys came out ready to play,” Gray said. “It’s their first game, and they’re nervous and they have jitters. They’ve got game one under their belt. Now it’s time to man up and go out there and play (what’s) next.”

Who knows whether Strong will stick with this up-tempo offense, stick with Swoopes or even stick with Watson. After all, as Strong pointed out, it was only the season opener. Texas has 11 games left.