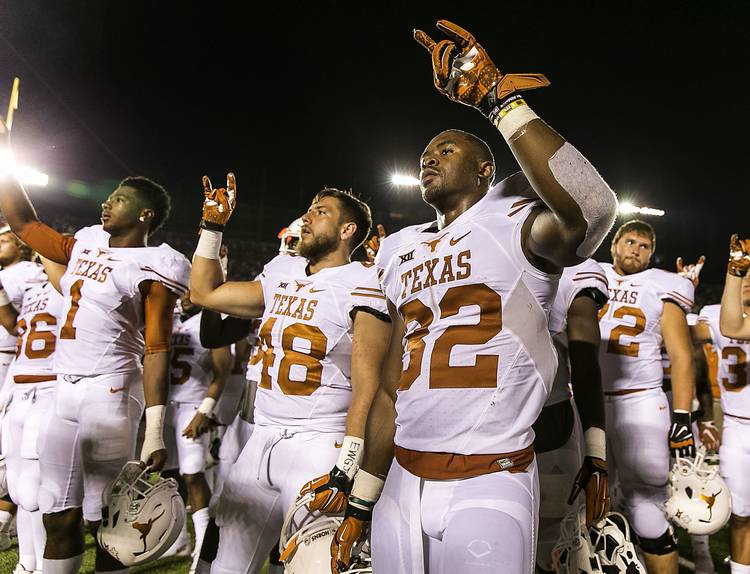 Pin the Notre Dame loss on Texas quarterback Tyrone Swoopes, if you’d like. But that’s too easy, too simplistic and, according to tight end Andrew Beck, plain wrong.

“You can’t point the finger at one person at all. That’s not the problem we have right now,” Beck said on Monday.

So who or what exactly is Texas’ problem?

“That goes above my pay grade,” Beck said. “I think y’all (the media) get to talk to Watson on Tuesday. So that’s a question for him.”

Is quarterbacks coach and play-caller Shawn Watson really the problem? Is he solely to blame for the Longhorns getting outscored 117-20 in Texas’ last three games? Was Watson the only reason the offense went three-and-out eight times in Saturday’s 35-point blowout?

Texas, which tries to regroup this week against Rice, may have more systemic issues than one assistant coach.

“That was a team loss and we knew it,” Beck said. “Special teams, I think we went out there three times with 10 guys on the field. Tough to win a game like that.”

Coach Charlie Strong would not say whether he was sticking with Swoopes this week or starting backup Jerrod Heard. He said the coaching staff would “make our decision later on in the week.” But Strong admitted he needs to be more involved in offensive game-planning.

“We can’t go through another season with a bad offense,” Strong said. “No, that cannot happen.”

Strong wishes he could hit the reset button, possibly start the season over. As it stands, the Horns (0-1) have the worst offense in major college football, statistically speaking. Texas ranks 122nd out of 122 FBS teams in total offense, having tallied up just 163 yards against the Irish. And that’s before Ohio State and Virginia Tech played Monday night.

“There’s millions and millions of people involved in this program,” Strong said on Monday. “We need to give them hope.”

Texas fans were looking for exactly that in the season opener. Instead, Swoopes completed just 7 of 22 passes for 93 yards. Heard played sparingly in the first half and only watched after halftime. Again on Monday, Strong said Heard was not injured.

Does Swoopes believe he should remain the starter?

“I feel like that’s up to them,” Swoops said, meaning the coaches. “I guess they obviously see something in me that they like and want to keep in. Whatever that is, they kept me in.”

It’s well established that Watson has a special kinship with Swoopes. He held back tears in mid-August when talking about how badly he wants Swoopes to succeed.

There’s a flipside to all that, too: Is Watson’s mind too clouded to see what Swoopes truly is or isn’t?

“He can be clouded, but the thing about it, we have to win,” Strong said. “The best person’s got to line up at that position and go win the football game, too.”

Strong has shown a willingness to make changes mid-season. At Louisville, he fired offensive coordinator Mike Sanford after a 2-2 start in 2011, his second season there. At the time, the Cardinals were averaging 18.7 points per game. Watson, then Louisville’s quarterbacks coach, took over the play-calling duties.

Strong insists that Texas has capable offensive players. He specifically called out running back Johnathan Gray, who had only eight carries against the Irish. Strong doted on backups D’Onta Foreman and Chris Warren. They have to get more touches, he said. Texas must establish itself on the ground.

He talked about receiver John Burt and Armanti Foreman’s ability to stretch the field. Daje Johnson and Marcus Johnson, who is day-to-day with an ankle injury, can handle speed sweeps.

Texas is 20-1 in home openers since 1994. Ironically, that was the last year Rice beat Texas. Can things improve by Saturday?

“If we didn’t have the players, you can say, yeah, you have issues. But we can get it fixed,” Strong said.