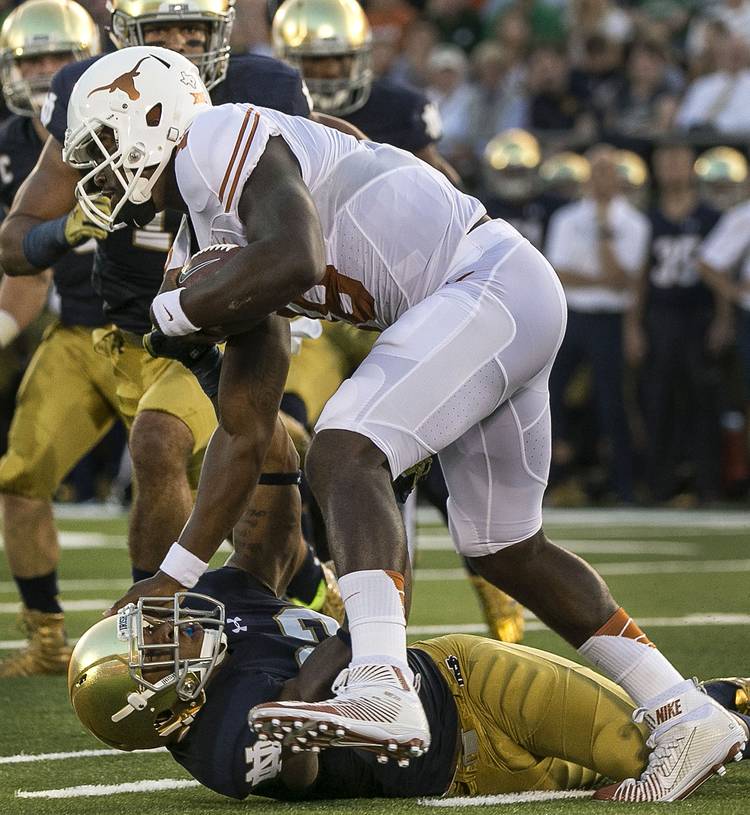 At Notre Dame, Tyrone Swoopes made his 13th career start.

That could prove to be an unlucky number for the Texas quarterback, whose hold on the position has apparently weakened just one game into his junior season.

Though he still sits atop the depth chart, there’s no assurance Swoopes will start against Rice on Saturday, according to Longhorns coach Charlie Strong.

“We’re gonna go through this week and make that decision at the end of the week,” Strong said.

It seems Strong is running out of patience after Swoopes turned in another clunker, completing just seven passes in a 38-3 loss to the Irish. He had just 93 yards, 48 of them coming on one deep ball to John Burt. Swoopes’ backup, Jerrod Heard, appeared in two first-half series and attempted one pass for a 10-yard gain.

It’s no secret that play-caller Shawn Watson prefers Swoopes to Heard because of Swoopes’ familiarity with the offense. However, Watson’s influence could start to diminish with Strong pledging to become more involved in game planning on offense and stating that he’ll be evaluating the performance of Watson and other offensive assistants.

“We can’t go through another season with a bad offense,” Strong said. “That can’t happen.”

Strong may have offered a hint about plans for Saturday when he endorsed the benefits of a mobile quarterback, a description that fits Heard and not Swoopes.

“What a running quarterback does is settle you down,” Strong said. “So now you can’t just come with all the pressure. He breaks contain and it’s over with. He can get down the field.”

On Gray, it’s black and white: Strong was adamant that Johnathan Gray needs more touches. The senior running back carried eight times against Notre Dame, well shy of the 15-25 range Strong had targeted.”We have to get the ball in his hands,” Strong said. “That’s very obvious.”

Gray gained 40 yards (5.0 average), but didn’t get his first carry until late in the first quarter.

Texas’ 52 offensive plays were broken down into 23 passes and 29 runs, with several of those runs coming on quarterback scrambles.

Flowers Power: Left guard Sedrick Flowers took responsibility for the punch he threw at the facemask of a Notre Dame player in retaliation for being shoved. Flowers was flagged for a personal foul.

“That’s not my character at all,” Flowers said. “I wasn’t raised that way. He came up and hit me, said some words. I got frustrated and swung back at him.”

The Big 12 did not respond to a message regarding punishment for Flowers.

“If I get anything, I deserve it,” Flowers said. “I swung at him. It’s not my character.”

Thought to be a strength, Texas’ defensive line hurting