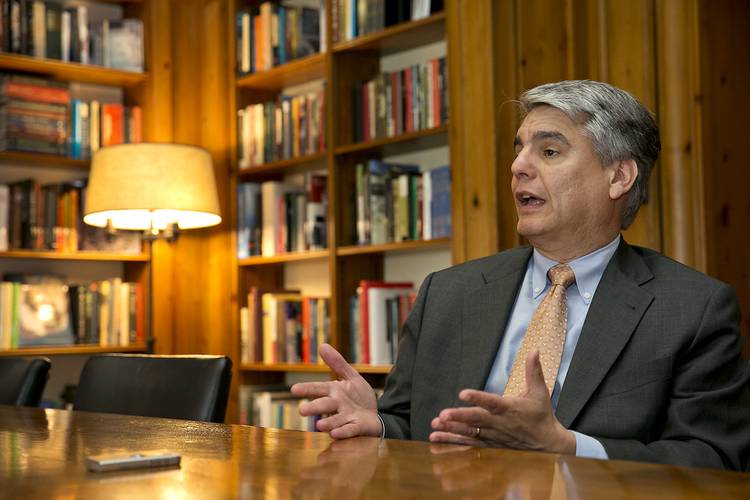 In a wide-ranging interview, Texas President Gregory L. Fenves on Tuesday said he meets regularly with men’s athletic director Steve Patterson but stopped short of giving him any public support.

Fenves described his relationship with Patterson in cool terms, almost as if he’s got a dozen other issues and angry athletic boosters is only one of them.

Asked specifically if he supports Patterson, Fenves said, “I guess the best way to describe it is I’m working with him and we are continuing to work through the issues.”

“I listen to everybody that calls me, whether it’s on athletics or statues,” he added during an hour-long session with members of the American-Statesman editorial board. “I listen to everybody who calls me. I’m respectful of their opinion. I don’t try to justify anything one way or the other. But when it comes to athletics, I say I’m fairly new to this, and I’m working well with Steve Patterson and we’re going through the issues.”

The American-Statesman reported on July 14 that Patterson’s job status was in jeopardy after a spring and summer full of unpopular changes, including the department’s decision to raise football ticket prices. Fenves issued a cursory statement then, and he was not made available for interviews during August.

Patterson met with reporters on July 17 and detailed numerous changes made on his watch. The department provided reporters with a six-page document titled “Texas Athletics Overview.”

“Some people may like what we’re doing, and some people may not,” Patterson said in July . “But somebody’s got to make tough decisions day in and day out to try to stay focused on what’s most important to us.”

Fenves continued to meet regularly with Patterson throughout the summer.

Arena update: Fenves said UT will definitely need a new basketball arena, as the current facility will be destroyed to make way for medical school expansion.

“We’re going to need that space for the medical school,” Fenves said. “That was part of the plan from the beginning, and that hasn’t changed. We can’t have an arena and a medical school on the same land.”

Fenves said the school has not had any discussions with city leaders about funding possibilities. But Fenves does want to explore off-campus locations.

“I think the arena functions as an important civic amenity,” he said. “You look at many cities of Austin’s size and larger, an arena in an urban area is important.”

Academic review: Fenves said the review of possible academic misconduct by former UT basketball players will be completed by the end of 2015. The school hired Alabama attorney Gene Marsh, who previously worked with the NCAA, to conduct the inquiry.

“I don’t want to speak for Gene,” Fenves said. “But I’ve not gotten any indications from my discussion with him that he feels there’s a systematic problem.”

On football: Fenves is no super fan like his predecessor, Bill Powers. But he was disappointed in Saturday’s Notre Dame game. “I hear from a lot of Longhorn fans,” he said. “Glad the football season is underway. Got some games ahead of us, so I’m optimistic that coach Strong knows what to do.”

Thought to be a strength, Texas’ defensive line hurting