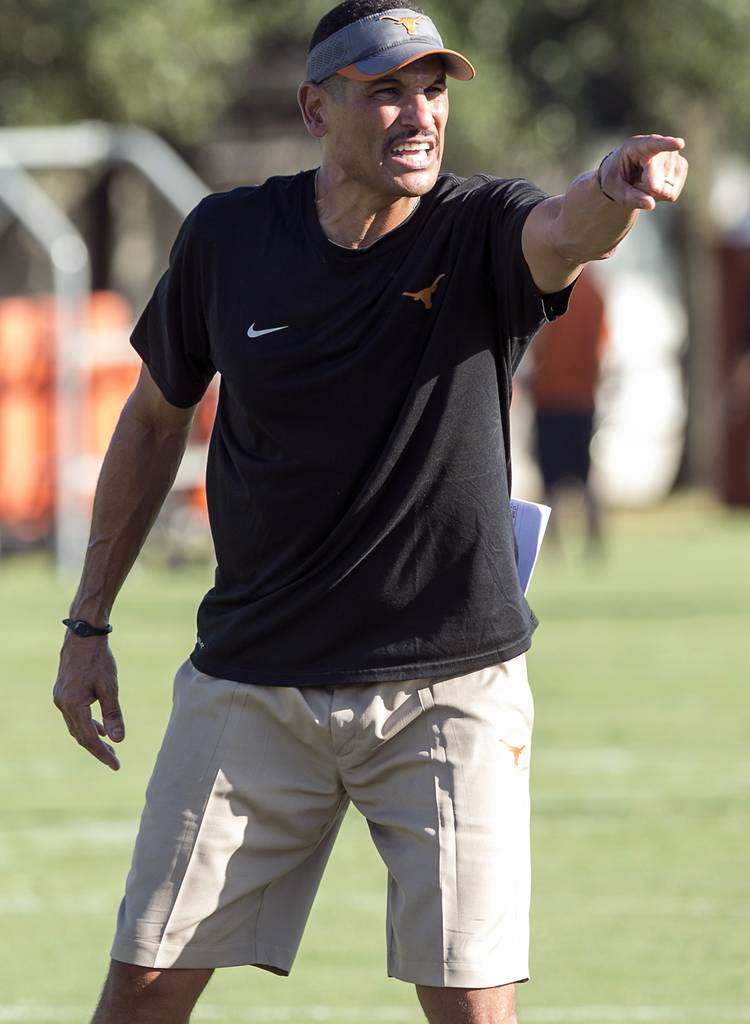 New Texas play-caller Jay Norvell makes his debut running the offense on Saturday. He has been coaching the Longhorns' receivers. (RODOLFO GONZALEZ / AMERICAN-STATESMAN)

Though he’s coached at Texas for only eight months, new offensive play-caller Jay Norvell has managed to win over several members of the team, and not just his wide receivers.

Norvell received an unexpected promotion on Tuesday when head coach Charlie Strong tabbed him to replace Shawn Watson and Joe Wickline, whose joint play-calling operation had yielded the nation’s lowest-ranked offense after one week. Strong made the announcement during Watson’s scheduled evening press conference. Watson was not there.

“I think Norvell is a smart coach,” running back Johnathan Gray said. “He knows what he’s doing, otherwise coach Strong wouldn’t have given him this duty. The players like him.”

Norvell will continue to coach receivers. He’ll make his debut calling plays against Rice on Saturday.

Watson and Wickline, who combine to make $1.225 million annually, were stripped of their play-calling duties because the Longhorns have scored just two touchdowns and made one red zone trip in the past three games. After a 38-3 loss to Notre Dame, Texas ranks last in the nation in total offense.

“It’s embarrassing,” Gray said. “It’s the University of Texas. Those are not our standards. We want to be the best offense in the country.”

Watson (quarterbacks) and Wickline (offensive line) will continue to coach their units.

Norvell coached at Oklahoma from 2008 to 2014 and held the title of co-offensive coordinator in his four final seasons. The Sooners were a disappointment last year, and Norvell was fired along with play-caller Josh Heupel. Norvell did not call plays for the Sooners and has not done so since the 2007 season at UCLA. The Bruins lost five of their final six games that year to finish 6-7. Norvell’s offense ranked No. 92 out of 120 teams with 22.4 points per game.

Strong hinted that Watson was either uncomfortable or unqualified to call shots in Texas’ new uptempo offense. Watson, who is schooled in the west coast system, said this preseason that he had to forget everything he had learned in his career.

“When you think about change, for some guys it’s very uncomfortable,” Strong said. “You just want to make sure if someone isn’t comfortable doing what you want to do and there’s someone on your staff who can do it, then you try to place that person in that position.”

The irony in Strong’s announcement is that Watson had encouraged Strong to hire Norvell. During the 2006 season, Watson and Norvell worked together in the Big 12 at Nebraska under Bill Callahan.

Watson and Wickline are the third and fourth offensive assistants Strong has either demoted or fired through 14 games (6-8 record). Les Koenning (receivers) and Bruce Chambers (tight ends) were dismissed after last season.

Norvell is expected to meet with the media for the first time in his new role following Saturday’s game.

“He’s real focused,” receiver Daje Johnson said. “He’s a big guy on effort. He wants to see positive work on the whole offense. He wants to put his voice in and let each position know what they need to do to get better. He talks to the o-line and the quarterbacks.”

Norvell, 52, has shown some creative coaching methods. After the spring game, he ordered Johnson to cradle a football roll from one sideline to the other as punishment for fumbling. His receivers play catch with tennis balls to improve eye-hand coordination. During fall camp, Norvell required receivers to read his book Complete Wide Receiver. It was released in 2012 when Norvell was at OU.

“It was a nice book, actually,” Johnson said. “It’s crazy when you read stuff how much it helps you instead of just acting it out.”

“The time that I’ve been here, I’ve never seen quarterbacks get extra work. He started that,” Johnson said. “After practice he’ll bring the quarterbacks with the receivers and we’ll do routes and red zones.”

Norvell now will have his eye on the entire offense.