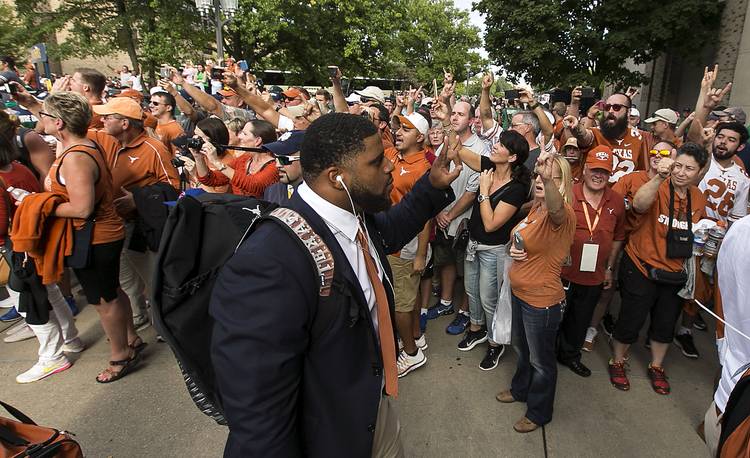 It was widely believed Texas’ defensive line would lead the team this year.

Yet through one game, two of the top linemen aren’t up to the challenge physically. Defensive tackle Tank Jackson, still rounding into form as he works back from 2014 foot surgery, is operating at a slower pace than he’d like. And fellow defensive tackle Hassan Ridgeway is out of shape after missing time in training camp, Longhorns coach Charlie Strong said.

If someone was to list the five best players coming into the season, Jackson and Ridgeway would almost surely be on it, as both tackles have been productive in past years. With them at less than optimal health, the line got pushed around at Notre Dame, whose veteran offensive front dominated in a 38-3 rout.

“A lot of us were sick to our stomachs because there were little things we could have done to help us out,” Jackson said.

On Monday, Strong referenced the positive play of only two defensive players. Neither one of them — linebacker Malik Jefferson or cornerback Duke Thomas — play on the line. It was a sobering remark by Strong about a unit that he previously said had a dozen or so guys ready to contribute.

Jackson had three tackles, Ridgeway one. Poona Ford started in front of Ridgeway and did not have a tackle. Defensive end Naashon Hughes was the most active member of the line, registering two tackles for loss among his seven stops.

Jackson acknowledged to feeling “rusty” in his first game since sustaining a Lisfranc injury in last year’s loss to UCLA.

“I’ll be fine the rest of the season,” he said.

Jackson said he had not yet watched film of Rice, Texas’ week two opponent, when he met with the media on Monday.

The Owls did some serious damage in a 40-point win over FCS-level Wagner State, rolling up a whopping 401 yards and seven touchdowns on the ground behind a line with just one returning starter from last year’s team that won the Hawaii Bowl. Four ball carriers had at least 74 yards with a touchdown, including quarterback Driphus Jackson, who got loose for a 43-yard scoring run before halftime.

Jackson, a fifth-year senior from Cedar Hill, accumulated 3,243 yards of total offense in 2014 and was the MVP of the bowl game win over Fresno State.

Sure, Rice’s opponent was Wagner, a decent team from the Championship Subdivision, but the numbers the Owls should have Texas’ attention.

“We know there’s a lot of things we gotta do a lot better,” Jackson said. “Watching the film, I was sick to my stomach because there were a lot of things I left on the table.”

Jackson said Texas’ line “has to be” the team’s strength.

But that’ll be tough to do with he and Ridgeway feeling weak.

Texas’ Fenves, Patterson continue ‘to work through the issues’