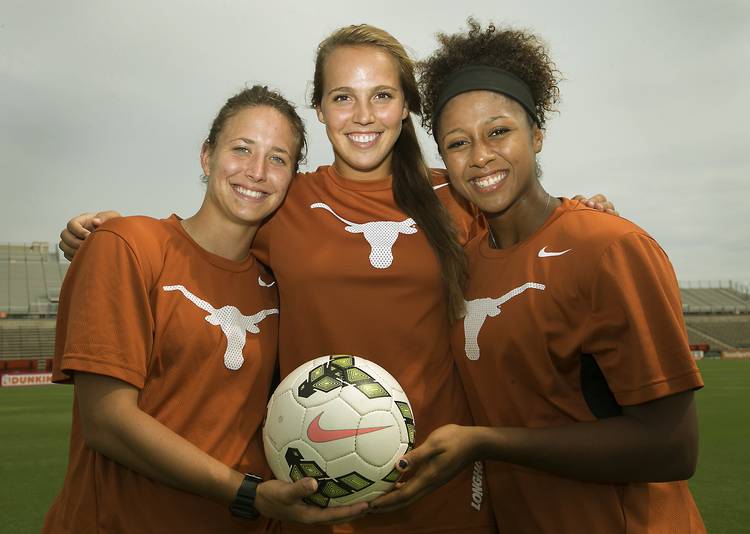 For three Texas soccer seniors, a certain topic of discussion is off limits, even to each other.

Abby Smith, Kelsey Shimmick and Lindsey Meyer are in their 12th season as  teammates. Try asking about their inevitable break up , and Smith, the goalie, will swat you away.

“We’re trying to postpone that as long as possible,” Shimmick said.

They were 9 years old when they first collaborated with the Dallas Texans, a decorated select program that stocks Division I rosters throughout the state. Their teams were consistently ranked in the top three nationally, and resided at No. 1 in the summer before their sophomore year prior to losing in penalty kicks for the national title to a team from San Diego.

That’s another discussion topic that stirs up bad thoughts.

As Longhorns, they’ve yet to replicate the success they shared as Texans, but the narrative appears to be shifting. Last Sunday, Texas scored its first road win over a ranked opponent in Angela Kelly’s four years, a 2-1 win at No. 8 UCLA.

The Longhorns (2-2-1) took control on a goal by Shimmick in the fourth minute, and Smith recorded a career-high 11 saves. Meyer started her 68th match.

“It gives our girls an opportunity to see the bigger opponents that we will play down the line,” said Smith, who leads the Big 12 with 33 saves. “UCLA is a really good team, so it provided us with a really good opportunity and it helped us set a standard for ourselves and for our future.”

On Thursday, Texas opens a three-game homestand against Oregon State (4-0-1). The Beavers were winless last season and scored only four goals.

Of the three, Meyer committed to Texas first, followed by Shimmick and then Smith.

“They hadn’t signed by the time that we got here,” Kelly said. “I was following them when I was at the University of Tennessee. We had to close the deal with them, put it that way.”

The trio hangs out away from the pitch, and Meyer was roommates with Shimmick and Smith her first two years of college. They still do handshakes that originated 12 years ago.

Several weeks ago, Shimmick posted a picture to Instagram of the three with award medals draped around their necks. They were 9 at the time.

“It made us sad ‘cause it’s our last year to play together,” Meyer said.

Tennis’ Rubio to Denver: Ricardo Rubio is feeling a touch overwhelmed. The Texas assistant men’s tennis coach recently left to be the head coach at Denver and he’s now trying to sell his house in Pflugerville, moving his wife and son to Colorado, and getting acclimated to his new surroundings.

“I feel like my head is spinning,” Rubio said.

Rubio, 44, served 13 seasons at Texas under Michael Center, who he calls his “mentor and someone I’ve always looked up to.” He was the 2008 national assistant coach of the year. He went out with a bang to close last season when Lloyd Glasspool and Soren Hess-Olesen became the first Texas duo to win an NCAA doubles title in 71 years.

“The last year or two I was thinking if I had the opportunity to be a head coach at a good school, I’d be interested,” Rubio said.

At Denver, Rubio replaces Danny Westerman, who guided the Pioneers to the NCAA tournament each of the past three seasons. Westerman left for Wisconsin in June.

Staff takes, Texas vs. Rice: This goes way beyond a normal Horns-Owls game