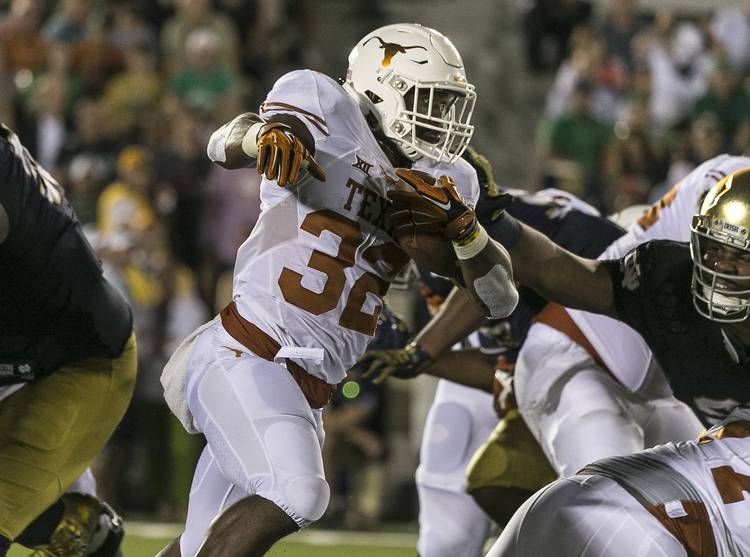 Texas running back Johnathan Gray had only eight carries in the Longhorns' 38-3 loss to Notre Dame in South Bend on September 5, 2015. (RODOLFO GONZALEZ / AMERICAN-STATESMAN)

Anybody miss Greg Davis yet? Public Enemy No. 1 among many Texas fans might be welcomed back with open arms these days.

What about Bryan Harsin or Major Applewhite? Those heroes got turned into heels, too.

Calling plays at Texas — or monitoring what’s said about the guy doing it — isn’t for the faint of heart. Shawn Watson lasted 14 games before Charlie Strong pulled the plug on him this week. Jay Norvell, welcome to the most uncomfortable seat in town.

Norvell can stick with quarterback Tyrone Swoopes, the junior who is 5-8 as a starter, if he likes. But fans expect to see something different on Saturday against Rice (1-0). Different is code for redshirt freshman Jerrod Heard.

“When we talk about change, we want to see it,” Strong said Tuesday when he announced supposed co-play-callers Watson and Joe Wickline would give way to Norvell, who joined the staff this year. It’s widely believed Watson ran the show when it came to play-calling, as Strong dubbed him the “one final voice.”

The anger stemming from last week’s 38-3 disaster at Notre Dame made for a wild week. On Tuesday, Texas President Gregory L. Fenves once again offered no public support for athletic director Steve Patterson. That wasn’t even front-page news after Strong announced the Watson-Norvell shakeup later that day.

It’ll make serious headlines come Sunday if UT fans stay home in droves. The athletic department announced earlier this week that 15,000 tickets were still available in a stadium that holds more than 100,000.

Many fans already feel like they’ve been gouged for higher ticket and parking prices coming off a 6-7 season. Some probably will risk the athletic department’s wrath by reselling tickets on the open market, which is against new policies. That’s another sore spot.

It’s the same fan base that once booed quarterback Garrett Gilbert straight out of the stadium, prompting him to transfer. Now for the first time, the concession stands are stocked with $8 domestic beers, too.

No, this is not a typical home opener, not a typical friendly environment for Norvell to show what he can do. UT fans are mad, and so is Strong.

Norvell, who spent the last seven seasons at Oklahoma, did not speak with reporters after the announcement earlier this week. But he did expound on his new employer during the summer.

Asked whether he thought UT had legitimate playmakers on offense, Norvell said, “Yeah, I think we’ve got a lot of guys that can do that. I don’t think those guys are born. I think they are made. It’s a matter of group execution. Big plays come when a lot of people do their job. Big plays happen when a lot of little things go right.”

Norvell stressed he’s big on building trust, between quarterbacks and receivers and coaches with players.

“It’s kind of like if I gave you 10 bucks and said, ‘Go put it in the bank for me,’” Norvell said. “If you did, then I trust you. If it didn’t make it to the bank, then I’m probably not going to throw it your way again.”

Receiver Daje Johnson said he’s “never seen the quarterbacks do any extra work” after practice until Norvell arrived. It was an odd admission, but enlightening if completely true. Norvell has the receivers sit on paint buckets turned upside down and catch tennis balls. He’s always looking for odd ways to sharpen skills.

“He doesn’t just focus on the receivers,” Johnson said. “When we’re doing walk-throughs before the game, he’ll talk to the O-line, he’ll give them some tips. He’ll talk to the quarterbacks and pretty much everybody on the offense.”

Strong specifically called out running back Johnathan Gray as someone who needs more opportunities. Gray had only eight carries against the Irish, for 40 yards. He didn’t touch the ball until UT’s third drive. NBC cameras had excellent, high-definition close-ups of Gray looking at the sideline with his arms raised in frustrating fashion. The senior was yelling at people on the sideline. Other times, receivers out wide were raising their arms too, signaling to the sideline to hurry up and call the play.

Perhaps some of that miscommunication goes away with one person directing the offense, as opposed to two or more.

“Norvell is a smart coach,” Gray said. “He knows what he is doing, otherwise coach Strong would not have given him this duty.”

The defense doesn’t get a free pass on Saturday, either. The defensive line, which Strong had touted as a strength, got driven all over the field last week. Rice quarterback Driphus Jackson was a key reason why the Owls went 8-5 last season and reached the Hawaii Bowl.

The Owls had 401 yards in a blowout win over FCS-level Wagner College last week. It’s unclear how that translates against a better opponent, but at least the Owls know what they’re doing offensively.

One thing about following the Longhorns: It’s never dull. Strong said he knew a change had to be made. He cannot lose a second game to a bad offense.

“We have to move this program forward,” Strong said. “You can’t take a step backward.”

How bad is it?

Here's a look at the last three games for the Longhorns' offense. Shawn Watson had the play-calling duties taken away from him after the Notre Dame game. Now, receivers coach Jay Norvell takes over.

Staff takes, Texas vs. Rice: This goes way beyond a normal Horns-Owls game