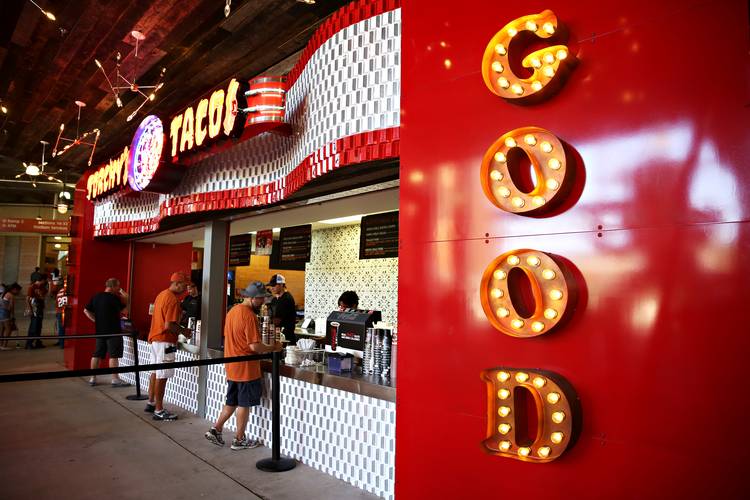 If University of Texas football fans thought Notre Dame was tough, try going head to head against Home Slice, Mangia or any other pizza spot in town.

When UT officials thought about how to improve their game day atmosphere, they focused on hyper-local choices, like Torchy’s Tacos and Pluckers. After surveying the landscape, UT offered a slice of its revenue pie to Austin’s Pizza owner J.D. Torian, who oversees 13 locations and typically serves more than 15,000 pizzas a week.

On Saturday, Austin’s Pizza will have its own concession stand inside Royal-Memorial Stadium for UT’s home opener against Rice. Three gluten-free varieties are available at Gate 8 on the stadium’s northwest corner.

“The biggest compliment I get from my friends is, ‘You did this?!,’” said Torian, who hopes to sell about 1,500 pizzas during the game.

It’s all a part of what UT officials believe is a new, better fan experience. Beginning this season, fans can experience a new fan fest in the north end zone at Royal-Memorial Stadium four hours prior to kickoff. This week, doors open at 3 p.m. Kickoff against Rice is 7 p.m.

But there’s one issue that was undeniable: UT’s game day atmosphere inside Royal-Memorial Stadium needed a big makeover. The athletic department surveyed season-ticket holders last fall and found that UT’s overall gameday experience rated a mediocre 6.6 on a 10-point scale. The national leader was 8.6, according to Turnkey Intelligence.

Patterson and Steve Hank, the athletic department’s chief revenue officer, both said they spent the entire offseason thinking about stadium upgrades, better food choices and, yes, beer. They also quickly decided to kill Jet Pack Guy, a loud pre-game spectacle that looked great once but lost its luster on the sixth appearance.

“We took a lot of fan surveys, got a lot of feedback,” Patterson said. “One of the things our fans said was they wanted to see more local food and experiences.”

So Patterson and Hank first scrutinized UT’s current food and beverage provider, Sodexo. The company was basically told to shape up or risk being replaced.

The UT System Board of Regents ultimately approved a seven-year, $45 million contract with Sodexo, which will continue overseeing the concession stands at all UT athletics facilities.

Sodexo agreed to pour thousands into facility upgrades and, essentially, up its game, Hank said. The company created a new division titled 1883 Provision Company, named for the year UT was founded.

New this year will be a carving station and a candy shop, Reynolds said. Fletcher’s Corny Dogs had a stand at the southwest corner previously. This year, a second stand was added on the northeast corner.

“Some of the locations, you’ll be able to get a Southwest chicken wrap, a hummus platter and gourmet fruit-and-cheese cups,” Reynolds said. “There’s something for everybody out there.”

And the kids? “For the kid like me, I’ll still be able to get my chicken finger basket,” he said.

For the first time in school history, beer and wine also will be sold at football games. Prices range from $8 to $10.

Alcohol was served at basketball, baseball and softball games last year, but UT administrators didn’t sign on football sales until this summer.

The implementation of beer sales forced UT to change its stadium re-entry policy. Fans used to leaving at halftime to go tailgating will not be allowed back in. Fans can still get to the UT alumni center through a walkway at Gate 7, yet that will also be monitored.

How you sneak liquor into the stadium through boot flasks or purses is still your business.

“I am confident that a lot of planning has gone into this,” said Texas President Gregory L. Fenves, who supports alcohol sales at UT sporting events.

Mike Rypka, founder of Torchy’s Tacos said, “I know there was some hesitation in the alcohol sales, but overall that will probably be good. Everyone checks IDs. There’s not going to be a ton of under-age drinking.”

Fans will also see a re-imagined tailgate experience on the LBJ Library lawn at 23rd Street and Robert Dedman Drive.

UT officials signed an agreement with Tailgate Guys, an Alabama-based company to provide white tents, folding chairs and “just about anything else you can think of,” said company owner Parker Duffey. The school gets 39 percent of the net revenue taken in by Tailgate Guys.

On Friday morning, a large tent on the LBJ lawn was equipped with a satellite dish. Duffey said he expects to sell dozens of tents equipped with TV packages. Tailgate spots are sold like seats in the stadium; fans can buy a spot for the whole season or just game by game.

Also, the area around the Pluckers’ concussion stand was cluttered like you wouldn’t believe.

Signs needed to be hung. Tables needed to be spaced out. Food trucks were making deliveries into the service entrance, and UT campus police officers were directing traffic.

“There are an incredible amount of people working to get stuff done,” Torian said. “There’s a ton to do, but you know they’ll get it done. I mean, I assume. Hey, we’re ready.

“The amount of beer carts alone is staggering.”

Texas officials open the doors to the north end zone of Royal-Memorial Stadium four hours prior to all home games for a new fan fest experience. Game tickets will be required for entry.

“We wanted to create some energy during pre-game, and hopefully that translates into energy for our football team on game days,” UT men’s athletic director Steve Patterson said.

The UT football team and coach Charlie Strong are scheduled to arrive at the stadium at 5. The Longhorns normally walk through the crowd, go into the north end zone and straight out onto the field upon arrival.

Led by QB Jackson, Rice looking to run over Longhorns