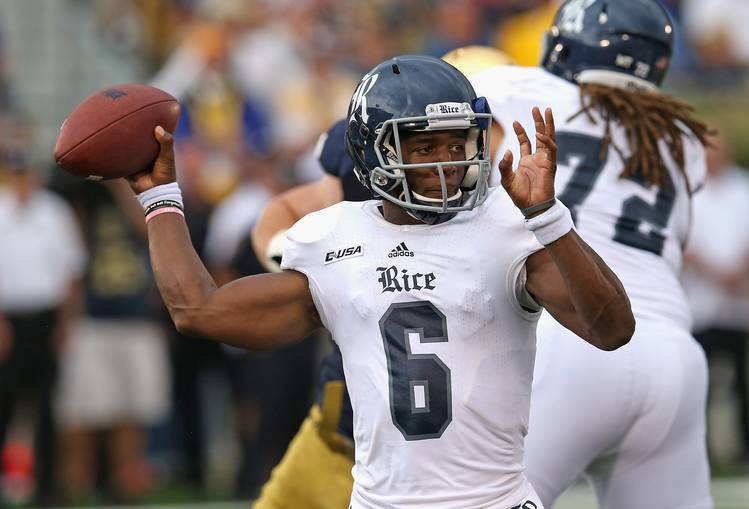 While Texas sorts through the rubble of last week’s disaster at Notre Dame, Rice has built a stable foundation.

But the Owls say they don’t view the Longhorns as vulnerable.

In a 40-point win over FCS-level Wagner State, the Owls scored 56 points and rolled up 543 yards of offense. That’s more yards than Texas has gained in its past three games (512).

“They’ll be playing with a chip on their shoulder, with a point to prove,” Rice coach David Bailiff said.

To prove a point, the Longhorns must score some on the field. They haven’t done much of that lately, totaling just two touchdowns and two field goals in three games. Something had to be done, and this week coach Charlie Strong decided to change play-callers, stripping the duties from his longtime aide Shawn Watson and giving them to Jay Norvell.

Conversely, Rice is in the midst of the greatest stretch in program history coming off of an unprecedented third straight bowl game. Rice hasn’t beaten Texas in Austin in 50 years.

“We think we’re gonna see a totally different game plan than what we saw at Notre Dame,” Bailiff said. “We anticipate (Johnathan) Gray touching the ball a lot more and getting the ball in playmakers’ hands.”

Asked if he expects an increased workload for quarterback Jerrod Heard, Bailiff responded, “I would think so.”

Rice has no such dilemma at quarterback. Driphus Jackson just might be the most dynamic offensive player on the field Saturday. He’s also a wonderful leader, Bailiff said. Early last season, Jackson separated his left (non-throwing) shoulder before halftime in a September loss to Old Dominion. He not only returned for the second half, but led the Owls to touchdowns on their final four drives.

The loss dropped them to 0-3, but Jackson kept the team together in his first year as starter, and the Owls rattled off six straight wins and ended the season with a 30-6 victory over Fresno State in the Hawaii Bowl. Jackson threw for 318 yards and three touchdowns and was named MVP.

He had surgery the following day.

Bailiff said Jackson, who was named after actor Richard Dreyfuss, is a hard worker and holds teammates to his standard of dedication. He is a former AAU basketball teammate with Texas’ Gray.

“I’m more concerned with winning games than winning a popularity contest,” Jackson said. “When you start winning, a lot of guys tend to follow along. There’s no fun in being the cool guy on the team when you’re losing games.”

Texas defensive coordinator Vance Bedford said Jackson reminds him of a guy who played with “Syracuse and the Philadelphia Eagles.” He was referring to Donovan McNabb. Jackson will get a lift from the probable return of tackle Andrew Reue, a four-year starter from St. Michael’s Academy. Reue missed the Wagner game with a lower leg injury.

“If I get caught up thinking they’re ripe for the taking or what their morale is right now, then I’ve lost focus on what I need to focus on,” Jackson said.