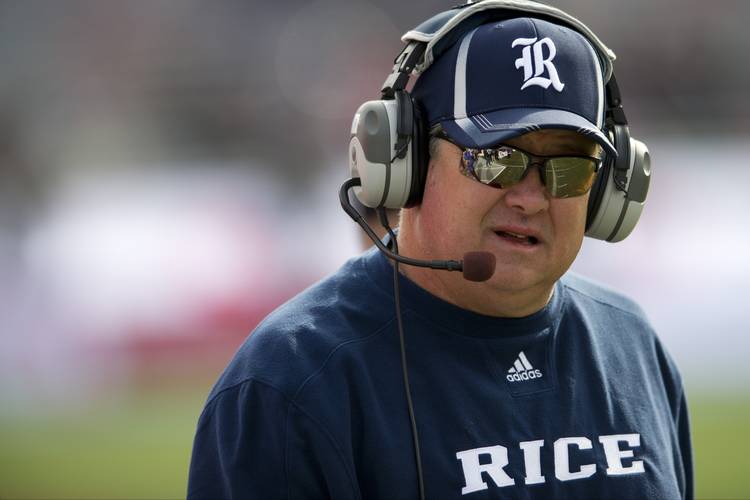 FORT WORTH, TX - DECEMBER 29: Head Coach David Bailiff of the Rice Owls watches his team against the Air Force Falcons on December 29, 2012 during the Bell Helicopter Armed Forces Bowl at Amon G. Carter Stadium in Fort Worth, Texas. (Photo by Cooper Neill/Getty Images)

Each week of the season, the American-Statesman will interview the beat writer of Texas’ opponent. This week, the Houston Chronicle’s Stephanie Kuzydym — @stephkuzy — offers insight on the Texas-Rice matchup:

Given that Rice played an FCS school (Wagner), were you able to learn much about the Owls in the opener?

I truly believe a team shows something about themselves every time they step out on the field. Rice’s quarterback Driphus Jackson showed he is willing to do anything for his team, even if it’s a game against an FCS school. (He rushed for a 43-yard touchdown and several times decided to tuck the ball and run instead of optioning it to a back.) He also showed that he can have an off day with his arm, but make up for it. As soon as the game was over, the first thing he talked about was that his passing game was unacceptable. Also, in preseason, he said he was OK being the bad guy, the one who said, “Yeah we won, but we could have played way better.” On Saturday, he did exactly that. He didn’t like how the team came out slow and flat to start the second half.

Jackson lost several of his weapons from last season. How is he coping?

He should be just fine. He has Zach Wright. He’ll hopefully have Dennis Parks back, who has been slowed in preseason with a nagging hamstring. He also seems to connect really well with redshirt freshman Lance Wright and sophomore James Mayden. His biggest thing is remembering that he doesn’t have the height he had in the past at receiver, so he needs to bring the ball down a few inches on his throws. Plus Rice’s option at running back is ridiculous in depth, speed, technique and more.

Does Rice view Texas as vulnerable after the Longhorns were embarrassed at Notre Dame?

Not at all. In fact, they view it that Texas will come out trying to win even harder. This is a team that overlooked Old Dominion last season and then got beat at home for doing it. They took that and ripped off six straight victories. They know what it’s like for the whole world to undervalue your talent and they know that Texas is tough, will have a lot of fans cheering and will spend the whole week making sure Week 2 isn’t a repeat of Week 1.

David Bailiff was asked several times in several ways about the David vs. Goliath storyline. He doesn’t believe in it.

Name a player or two for Rice that hasn’t gotten much attention, but that you expect to have a nice season.

Safety Destri White. He’s one of the most relaxed but focused players on the field. In between plays during practice, he’ll be dancing to the music and keeping the secondary loose, but as soon as the whistle blows for the next play, he’s focused. It’s like those 10 seconds of staying loose keeps his head from clouding with too much overanalysis. Plus he’s quick.

What’s the strength of Rice? How about the weakness?

Their weakness is consistency — and that’s what Bailiff preaches the most. Staying consistent. During their scrimmages one week, the defense would be a lock-down D and the next they gave up massive plays. Saturday, Driphus’ throwing game wasn’t there and his receivers dropped balls. Driphus had days like that in practice, but he always understood that if he didn’t focus on the negative, he would have all his positives — and then he’d have this crazy good practice.

Rice’s strength is that everyone expects the same thing. Nobody is expecting less than a trip to a fourth straight bowl game. In fact, their expectations are actually to find a spot in the Top 25, so they won’t just come out and say it, but that means beating the UTs and Baylors on their schedule. Those expectations fuel them so much that it’s bringing their level of game play up, which means they bring more to practice, too. This is not your father’s Rice Owls.

Texas vs. Rice: The Eyes of Texas will be upon whom?

Texas 42, Rice 28: Longhorns surge to win in the start of the Norvell/Heard era