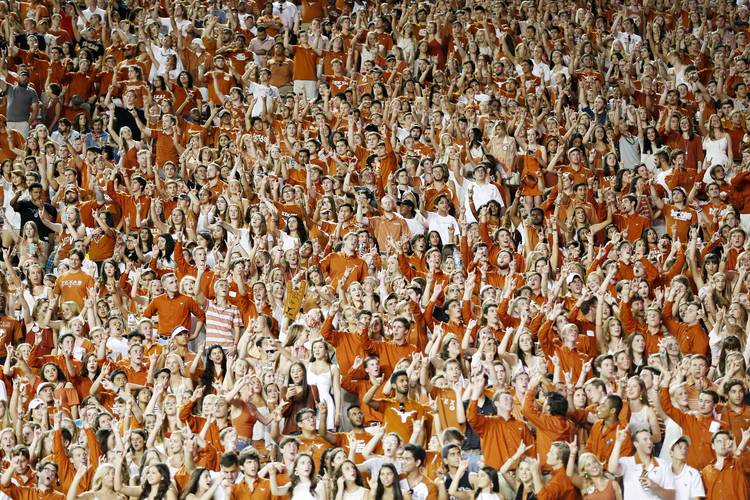 UT fans put up their horns during the game against RICE at Royal-Memorial Stadium on Saturday September 12, 2015. JAY JANNER / AMERICAN-STATESMAN

Given the first start of his career, redshirt freshman Jerrod Heard led Texas on an 80-yard scoring drive on his first series and threw a 32-yard touchdown pass to Armanti Foreman with just his second pass of the night (and third as a Longhorn). Oh, and there also was the 69-yard bomb to John Burt on the first play of the third quarter. Make way for a new hero.

Yes, that’s a joke. But Daje Johnson broke a couple of tackles, fielded his first punt of the night and scored on an 85-yard return. It was Texas’ first score by a punt returner since … well, Daje broke another 85-yarder against Oklahoma back in 2013.

On Rice’s very next series, Texas’ Duke Thomas fielded a short punt and ran it back 56 yards to the Owls’ 6 to set up Texas’ second touchdown. It was his first career punt return.

Rice’s Sam Stewart scored the Owls’ first touchdown on a 22-yard burst up the middle. What made it weird was Texas cornerback John Bonney tackled him, but never actually took him to the ground. No part of Stewart’s body touched the playing surface as he popped up at the 5 and slipped into the end zone.

Rice pulled off a gadget play on the opening kickoff. Samuel Stewart lay on his stomach in the end zone, but got up, received an across-the-field lateral from a teammate and raced to the Owls’ 46-yard line, setting Rice up with valuable opening field position.

A small private plane flew above Royal-Memorial Stadium before the game with a trailing banner that read: “PATTERSON MUST GO.” Or was that the worst banner? You make the call.

Texas safety Jason Hall picked off a pass from Driphus Jackson in the end zone, but chose to run it back out, only to carry the ball loosely and fumble it back to Rice at the Longhorns’ 35. The Owls scored a touchdown four plays later.

@kbohls I guess I missed the presser when Strong announced Manny Diaz was retained as tackling coach.

Rice was missing a starting defensive end. Graysen Schantz, who made the All-Conference USA Freshman Team last season and made five tackles, 1 1/2 for losses, in the Owls’ win over Wagner last week, sat out with a lower leg injury.

One week after Notre Dame thrashed Texas, the Irish lost starting quarterback Malik Zaire to a fractured leg and darn near lost a road game to Virginia. The Irish did bail out with a long touchdown pass to Will Fuller — who also burned the Longhorns a week ago — for a last-minute 34-27 win. Thankfully, Texas doesn’t play Virginia this season.

Horns up, Horns down