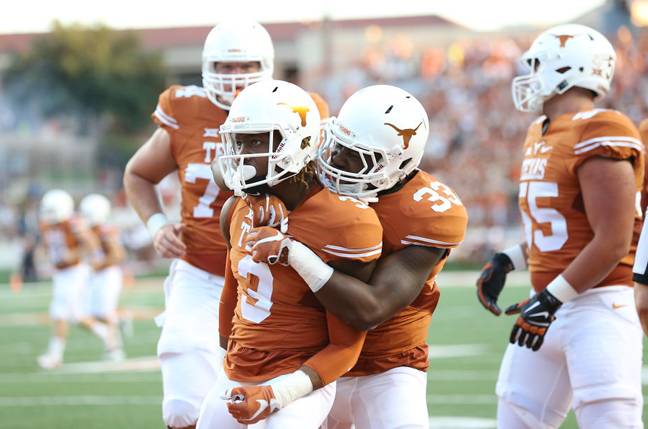 Texas #3 Armanti foreman is hugged by his brother D'Onta Forman after scoring in the first half of the game against Rice at Royal Memorial Stadium Saturday September 12, 2015. DEBORAH CANNON/AMERICAN-STATESMAN

You should. As bad as last week’s season opener went, Saturday’s home opener was about as good as can be in Texas’ 42-28 win.

Heard was 4 of 7 for 120 yards and 2 TDs. He also had 10 carries for 96 yards. Freshman receiver John Burt had a 69-yard touchdown catch from Heard in the third quarter. Freshman linebacker Malik Jefferson returned a fumble 26 yards for another score. Daje Johnson wowed the crowd with two long punt returns — one was an 85-yard touchdown, the other a 31-yarder that set up another score. Duke Thomas also chimed in on the punt return game.

Tyrone Swoopes entered the game with 6:33 left in the game. He was 1 of 3 for 8 yards, and had an 8-yard scramble for a first down.

It wasn’t a big night for senior running back Johnathan Gray; he was expected to be a big part of the game plan, but ended up with only nine carries (17 yards) and one catch (8). That’s 25 total yards. He did score a touchdown, though.

It didn’t matter. Texas produced seven plays of 25 or more yards, and that was enough.