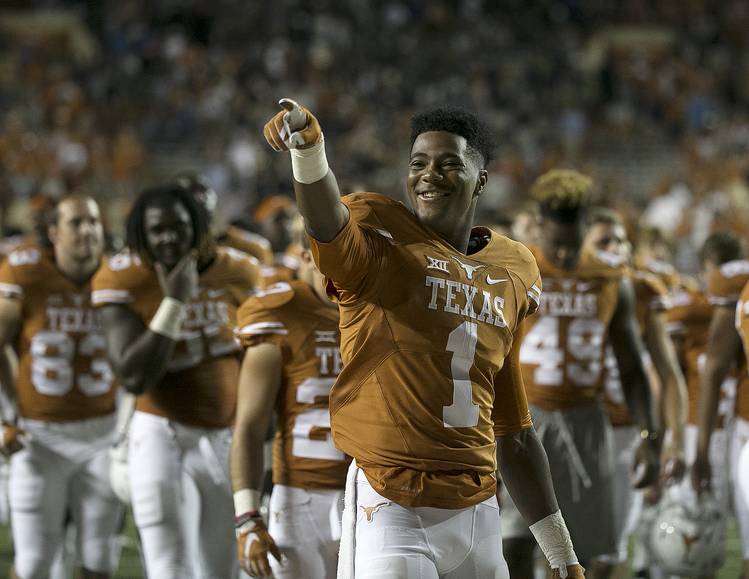 Texas receiver John Burt was all smiles and pointing to the crowd after defeating Rice at Royal Memorial Stadium on Saturday, September 12, 2015. (DEBORAH CANNON / AMERICAN-STATESMAN)

There’s plenty to dissect about Texas’ 42-28 win over Rice. The defense got exposed again in the second quarter. The offense had some big plays but couldn’t get things going on the ground, outside of quarterback scrambles.

California (2-0) will be a stern test for Texas’ pass defense this Saturday at Royal-Memorial Stadium. Bears quarterback Jared Goff is already being touted as a Heisman candidate. Coach Sonny Dykes will come to town looking to beat his father nemesis from Spike’s days at Texas Tech.

But now, Texas now has some “juice,” as coach Charlie Strong likes to say. The players were energized by Heard’s first career start and all the contributions made by the freshmen. Jefferson believes it’s only just the beginning.

“It happens now. Everything has to rotate now,” said Jefferson, who had nine tackles and a 26-yard fumble return for a score. “We have to get that fluid feeling now, so we can be great in the future and we know what greatness is.”

Asked where he gets such extreme confidence, Jefferson said, “That’s definitely how I was raised. You never want to be the bottom of the totem pole. You always want to fix things that are broken. This program’s not broken. We’re just shaken a little bit.”

Samuel Stewart averaged 5.2 yards per carry and had only 1 negative yard all night. This came one week after Notre Dame piled up 214 rushing yards and averaged 4.1 yards per attempt.

Stewart’s straight-ahead running helped the Owls simply dominate the Horns on third down. Rice converted 8 of 12 third-down opportunities in the first half and 14 of 21 overall. Rice had an eye-popping 96 offensive plays compared to UT’s 38.

“Somebody has to go make a play in the backfield,” Ridgeway said. “We have to take it personal. When they run right at us, that’s a statement saying we can’t defend it.”

Meanwhile, the Longhorns couldn’t get much going with their rushing game. Senior Johnathan Gray appeared ready to roll when the team arrived. He walked in shoulder to shoulder with Strong, a clear message that he was a team leader and expected a big night.

But Gray had only 17 yards on nine carries. In fact, sophomore D’Onta Foreman actually looked better, not that you can tell by the stats. Foreman had just 23 yards on six attempts.

Heard had 96 rushing yards, the majority coming on scrambles. It’s known that Heard can make magic with his legs. Heard’s passing accuracy is what has held him back, according to quarterbacks coach Shawn Watson.

Based on what UT fans saw against Rice, Heard probably should’ve been given more opportunity regardless how he looked in practice. “He’s been held back, like in a prison cell,” Jefferson said.

“You always have to have faith in yourself,” Heard said.

New UT play-caller Jay Norvell had a more grounded thought process. “Let’s not fool ourselves. This is the Big 12,” he said. “We have to build on what we did and find more ways to get chunks of yardage. We are still not running the ball the way we need to, and somehow we need to do a better job there.”

UT coaches did everything they could to drive home how embarrassing the Notre Dame loss really was. Normally, they show players a highlight film of the previous week to reinforce positivity.

“Usually on the highlight tape, they’ll show highlights of the game, but there wasn’t really no highlights,” Daje Johnson said.

Instead, the coaches found clips of TV broadcasters running down the Longhorns. “Some dude said a Chicago high school team could beat us,” Johnson said.

The Horns knew they had to get things together, or this season could turn south in a hurry. Cal is a completely different test this week. But the most important thing is that Texas feels good about itself again.

“Sometimes I feel like we’re so uptight instead of just going out and playing,” Strong said. “When your quarterback has juice, then your team is going to have juice.

Next up for Texas: Cal