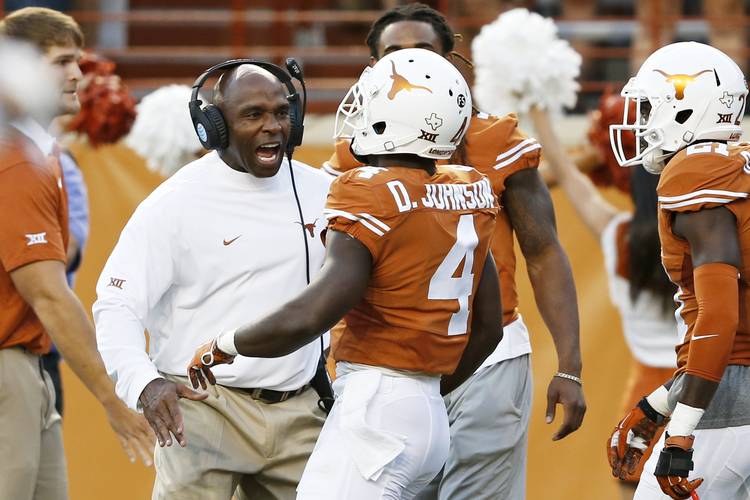 Texas receiver Armanti Foreman hauled in a 32-yard touchdown pass early against Rice. He came off the field and immediately got in Daje Johnson’s face.

“He was telling me, ‘You’re gonna get one, don’t worry about it,’” Johnson said. “So after he scored, I told him, ‘I gotta get me one now.’ So it just happened like that.”

Johnson finally had the breakthrough moment everyone’s been waiting for. After Rice was forced to punt on its first possession, he raced 85 yards for an electric touchdown return that sparked the Longhorns’ 21-point first quarter.

Under Charlie Strong, 21 points constitutes an offensive avalanche. The Longhorns haven’t scored that much in any one quarter in 15 games under their current head coach.

Johnson had three punt returns totaling 119 yards. It was UT’s first punt return for a touchdown since Johnson had a similar 85-yard return against Oklahoma in 2013. The Longhorns had 175 yards on four returns on the night, setting a new school record.

“I could’ve scored on that one,” Johnson said, “but I didn’t see it until the last minute and I ended up stepping out. He was in my face about that.”

Johnson is the poster child for Strong’s tough-love approach. The coach could easily have cut ties with Johnson last year while he was dismissing others for all sorts of rules violations. But he stuck with Johnson, even when the receiver released ill-advised rap songs on the Internet.

Before the season started, Johnson swore he was a changed man. “I am worth the investment,” he said prior to training camp. The coaching staff must believe it to be true. Johnson is a key piece of the weekly game plan, and he’s allowed to speak with reporters as a team leader.

“I always want to knock on wood, because he’s made just a complete turn and he continues to do everything we ask him to do,” Strong said. “And he’s so explosive. You put the ball in his hands, something good is going to happen.”

Johnson still isn’t being used effectively as a receiver. He didn’t have a single catch against the Owls. Quarterback Jerrod Heard completed only four passes all night.

Still, Johnson was pleased at the overall team win. His stats will come, he believes. At this point, the Longhorns simply need some stability.

“Everyone wants to just settle down and have fun playing now and not worry about what’s going to happen next,” Johnson said.