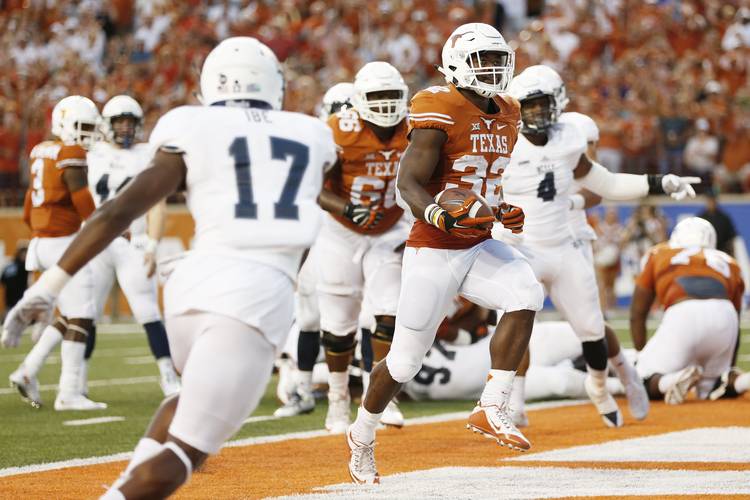 UT runningback Johnathan Gray gets a touchdown during the game against Rice at Royal-Memorial Stadium on Saturday September 12, 2015. JAY JANNER / AMERICAN-STATESMAN

All week long, the Texas coaching staff hinted that Johnathan Gray would be a big part of the offensive game plan against Rice. Turns out the senior running back was almost no factor at all.

Gray had nine carries for 17 yards, a 1.9 average. He did have a 1-yard touchdown plunge.

The former Parade All-American from Aledo actually fared better at Notre Dame, when he ran eight times for 40 yards.

“Whether it’s Johnathan or somebody else, we’ve got to find more ways to get chunks of yards  and keep possession,” new play-caller Jay Norvell said. “We’re still not running like we need to.”

Gray’s limited touches in South Bend elicited all kinds of criticism from fans, media and even the staff itself. One of the problems Saturday night: The Owls had the ball most of the game, despite being on the wrong end of the score. Time of possession favored Rice, 44:02 to 15:58.

“With Jerrod (Heard) at quarterback, there is a different dynamic to the running game. He gives you big plays,” Norvell said. “I think he nearly ran for 100 yards.”

Many happy returns: Texas has been waiting for a huge play from its return game for a long time. The Longhorns got not just one, but three.

Daje Johnson, the senior from Hendrickson, delivered in the first quarter, taking a punt 85 yards for a touchdown. A slick spin move allowed him to break free of early would-be tacklers. After that, he simply outran the Rice defenders.

Coach Charlie Strong said during the summer that he made fun of Johnson, needling him that he hadn’t made a play on special teams since the 2013 Oklahoma game. And that was the last punt return for a touchdown by any UT player.

Shortly after Johnson’s return, and still in the first quarter, Duke Thomas returned a short punt 56 yards to the Rice 6. That set up Gray for a 1-yard TD run to make it 21-0.

In the third quarter, Johnson took a punt 38 yards to the Owls 28 to set up the Horns’ sixth touchdown.

The Longhorns broke a school record with 175 yards on four punt returns, breaking the mark of 173 yards in seven returns against Baylor in 2001.

21, jackpot: The 21 points scored by Texas in the first quarter are the most in any quarter during Charlie Strong’s 15 games at Texas. It also is more points than the Horns had scored (20) in their last three games combined — a 48-10 loss to TCU, a 31-7 loss to Arkansas and the 38-3 loss to Notre Dame.

Fitness test: After a first-down dash late in the third quarter, quarterback Jerrod Heard flashed a little charisma and attitude by doing a series of push-ups before getting up. “That’s just Jerrod, I guess,” said receiver John Burt, who snagged a 69-yard TD pass from Heard. “He’s got energy, that’s for sure.”

Rushin’ Rice: Jowan Davis, Rice’s top running back, did not play because of injury. He ran for 956 yards last season. But the Owls had plenty of success on the ground. Samuel Stewart rushed for more than 100 yards in 2 1/2 quarters and finished with 130 yards on 25 carries.  Rice outrushed Texas 228-149.

Driphus Jackson, Rice’s athletic quarterback, was a 3-star recruit from the always-strong Cedar Hill program. Like most Owls, he drew only marginal interest from Power Five schools. Stewart, the 130-yard rusher, was just a 2-star from Houston Cypress Woods.

Shank: For the second week in a row, Michael Dickson misfired on a punt.  He hit one just 17 yards late in the first half to set up the Owls on the Horns’ 38. Safety Dylan Haines bailed out Texas with an interception near the end zone to stop the threat. At Notre Dame, Dickson had a 28-yard punt that helped lead to the Irish’s first score.

Trickery: Rice started the game with a gadget play returning the opening kickoff. A Rice returner threw the ball across the end zone to Stewart, who took it out 46 yards. It mattered not; the Texas defense pushed the Owls back 13 yards.

Celebrity sightings: The home opener brought out some of the rich, talented and famous alumni. On the sidelines were Masters and U.S. Open champion Jordan Spieth, six-time NBA All-Star Kevin Durant, along with Tristan Thompson, Myles Turner, T.J. Ford and Shaka Smart. Anyone for hoops? With a little golf mixed in?

Short yards: Some fans showed their feelings toward the Texas athletic director by renting out an airplane flying a “Patterson Must Go” banner over the stadium. … The line started at Texas minus 16 and was bet down to 14.5, meaning the Horns did not cover. … A big cheer was let out at this final: Toledo 16, Arkansas 12. … Three Horns — linebacker Malik Jefferson, wide receiver John Burt and running back D’Onta Foreman — notched their first career TDs. … Texas wide receiver Marcus Johnson did not dress after suffering an ankle injury against Notre Dame. … Long-time former sports information director Bill Little was honored before the game.