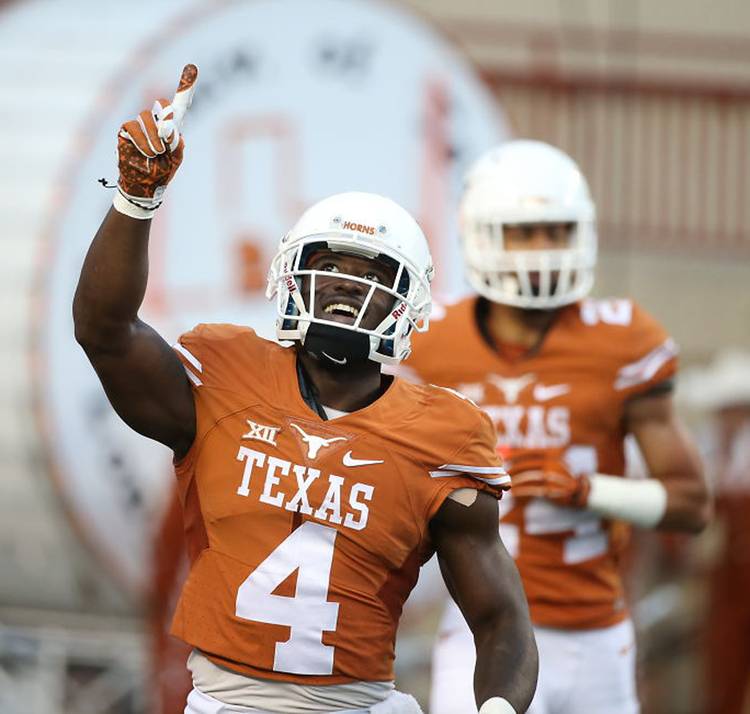 Here are five that ended up making a big difference:

After Texas built a 21-0 first-quarter lead, Rice dominated the second quarter and went into halftime down just 21-14. The Longhorns badly needed a spark after getting the kick to start the third quarter. Redshirt freshman Jerrod Heard and freshman John Burt immediately lit the match on the first snap, hooking up on a 69-yard touchdown play. It turned out to be Burt’s only catch. But what a big one.

“I was telling the coaches at halftime that I was beating my guy and that the play was there,” said Burt, a four-star recruit from Tallahassee, Fla. “So I was plugging for it a little bit, and we put the play in at the half.”

Charlie Strong has been prodding Daje Johnson about using his sprinter’s speed to produce some lightning on a punt or kick return. Texas didn’t have a punt return touchdown in 22 games, since Johnson pulled one off against Oklahoma in 2013. Strong got his wish when Johnson took off 85 yards for a score to make it 14-0 with 6:43 left in the first quarter.

The former Hendrickson player, now a senior, has experienced ups and downs with the program, but this was Johnson at his best. “I know I can break one at any time, but a lot of things have to fall into place for a play like that,” he said. “It felt good to give us a lift.”

Ever since he committed to Texas, Malik Jefferson has had an aura about him. The five-star freshman recruit from Mesquite Poteet was one of the few Longhorns who looked good at Notre Dame. Then against Rice, the linebacker delivered his first impact play. Cornerback Kris Boyd blew up a pitch play with 8:14 to go in the third quarter, forcing a fumble, and Jefferson executed a relatively easy scoop and score from 26 yards out.

“Right spot at the right time,” Jefferson said. He also spoke of the team’s many freshmen contributions. “We bring some excitement and energy,” he said. “That’s important because there’s been a lot of negativity surrounding this program.”

Rice has uncovered a promising running back in Samuel Stewart. You’d swear he has a future in gymnastics. The 5-9, 200-pound redshirt freshman from Houston Cyprus Woods rushed for 130 yards and two scores and showed all kinds of flexibility. On his second score, he bounced off defenders and did a beautiful pirouette into the end zone to get Rice back into the game at 21-14 shortly before the half.

“He’s going to be a huge asset to this program for a long time to come,” quarterback Driphus Jackson said of Stewart. “He did a great job running, in protections, in the zone, all the way around.”

5. Gift wrap this one

About the only way Texas could get Rice off the field was by forcing a turnover. After the Horns went up 28-14 on the Heard to Burt bomb, the Owls marched down the field, looking like they would cut it to seven in the third quarter. But linebacker Edwin Freeman  crunched Darik Dillard, and the Rice back fumbled at the UT 25, with Paul Boyette recovering.

“We believe we had the better team,” Rice coach David Bailiff said, “but you can’t come into DKR and turn the ball over five times.”

Daje Johnson has breakthrough moment many have waited for

After snapping 3-game losing streak, Texas has some ‘juice’