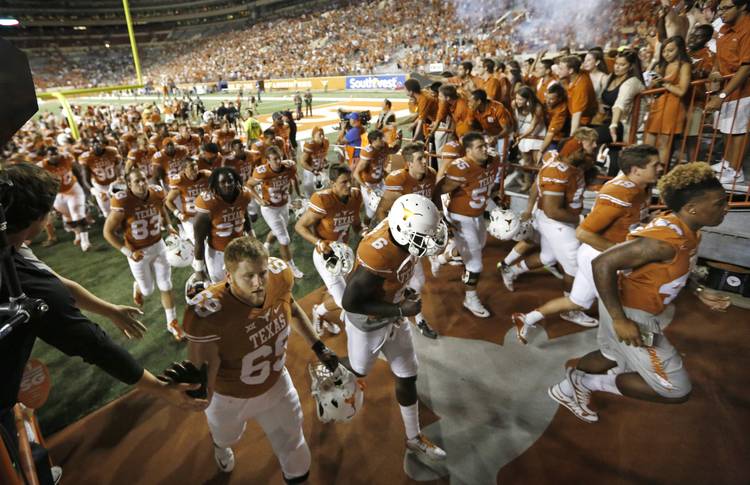 WHY TEXAS (1-1) WON: Because Jerrod Heard was electric. Because the Longhorns forced four turnovers. Because Daje Johnson (three returns, 118 yards, one TD) wowed ’em on punts. Because the freshmen, from Heard to John Burt to Kris Boyd to Malik Jefferson, came to play. Because playing in front of 86,458 friendlies at Royal-Memorial is a lot different than playing in front of 80,795 mostly unfriendlies at Notre Dame Stadium. Because this was Rice, which has now dropped 13 straight games to Texas and hasn’t beaten the Longhorns since 1994 and only twice in 43 tries since 1965.

THE EYES OF TEXAS: … were on three specific Owls — quarterback Driphus Jackson, a shifty player who earned Hawaii Bowl MVP honors last year and had a long touchdown run last week against Wagner State; running back Luke Turner, a versatile back who figured to get more touches with the injury of Jowan Davis, the Owls’ leading rusher; and defensive end Brian Womac, who had four tackles for loss, a sack and a forced fumble in Rice’s opener. How’d they do? Jackson was 16 of 29 for 139 yards, one touchdown and two interceptions. He was pretty impressive. Turner had only one carry, but did catch a touchdown pass. Womac’s night was much quieter than his season opener — two tackles, one for loss.

Offense —  Heard, who not only made plays with his arm (the 69-yarder to Burt), but also his legs (96 rushing yards, including two big 35- and 18-yard scrambles). More than anything else, he gave the team a real shot in the arm.

Defense — Jefferson (for the second straight game), who came so close to a four-sack night but settled for four quarterback hurries and a 26-yard fumble return for a touchdown. Oh, and he also led Texas in tackles.

(2) In many ways, this was a must-win game for the Longhorns. Mission accomplished. Also, in many ways style points counted in this one. The big plays should have appeased an uneasy fan base.

(3) For the first time in 12 games, Texas scored a touchdown in the third quarter. It took all of 23 seconds, on the Heard-to-Burt pass.

(1) Third downs. Must do better, defense. The Owls converted 14 of their 21 chances, and were an impressive 7-of-8 in the second quarter.

(2) Where were the sacks? Texas ended up with two (Dylan Haines, Chris Nelson) but should have had a handful. Jackson was slippery back there.

(3) Michael Dickson‘s hot and cold foot. His 17-yard punt led to a sideline chat with Charlie Strong. But his 59-yarder later in the game was a thing of beauty.

Texcetera: The Longhorns broke a school record for total punt return yards in a single game, thanks to Johnson’s two big ones and Duke Thomas‘ 56-yarder. … When Texas scored on its opening drive, it snapped an 11-game streak for Rice holding its opponent scoreless on first drives. … Texas improved to 72-21-1 all-time vs. its old Southwest Conference rival. … This was Texas’ 16th straight win in a home opener. … The Longhorns had the ball for only 15:58 and had only 38 offensive plays in all. But there were scoring “drives” of 9, 2,1 and 5 plays. … Heard’s 69-yard touchdown pass to Burt was the fifth longest pass ever thrown by a Texas freshman and the 11th longest catch by a Texas freshman. … It had been 20 games since the Longhorns had returned a fumble for a touchdown. … It had been 22 games since Texas returned a punt for a touchdown. And Daje Johnson moved into fourth place in school history on punt returns for touchdowns.

Bests & Worsts of Texas vs. Rice