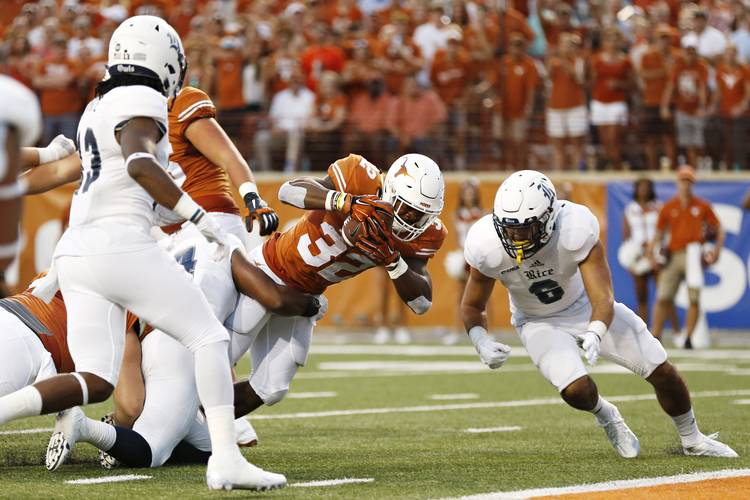 Jonathan Gray goes in for a touchdown during the game against Rice at Royal-Memorial Stadium on Saturday September 12, 2015. JAY JANNER / AMERICAN-STATESMAN

Next up for the Horns

About Texas: As low as the Longhorns looked in the opener at Notre Dame, Saturday’s 42-28 win over Rice was full of highs. New starting quarterback Jerrod Heard threw a 69-yard touchdown pass but also nearly rushed for 100 yards. Daje Johnson had two long punt returns, including one for a touchdown, and Texas forced four turnovers. The Longhorns scored touchdowns on offense, defense and special teams.

About Cal: The Bears have made it look easy so far, outscoring Grambling State (73-14) and San Diego State (35-7) by a combined score of 108-21. This is nothing new; the Bears hit 45 points five times last year, when they had the nation’s 11th-ranked scoring offense. Quarterback Jared Goff, who had 35 touchdowns and seven interceptions last year, has picked up right where he left off — 630 yards, six touchdowns in two games.

About the series: They’ve only played five times, but Texas has won every one. The last meeting came in the 2011 Holiday Bowl, a 21-10 Longhorns victory.

The last time: David Ash and Jaxon Shipley certainly hooked up for their share of touchdown passes, but it was usually Ash throwing to Shipley, not the other way around. But Ash’s 4-yard touchdown was Texas’ first score and the quarterback went on to earn MVP honors in the 21-10 Holiday Bowl victory. Texas’ defense forced five turnovers, and Ash added a 47-yard touchdown pass to Marquise Goodwin.

After snapping 3-game losing streak, Texas has some ‘juice’