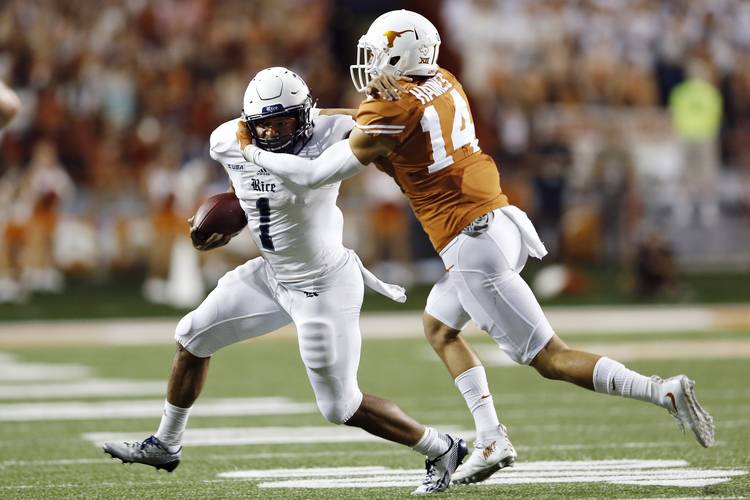 Rice #1 Darik Dillard tries to push through a tackle by Texas#14 Dylan Haines during the game against RICE at Royal-Memorial Stadium on Saturday September 12, 2015. JAY JANNER / AMERICAN-STATESMAN

This trend has got to stop.

After the season opener, Texas had the nation’s lowest-ranked offense. Now the Longhorns are dead last in third down defense. What’s next?

“We took a good, long look at that,” safety Dylan Haines said Monday.

Long being the operative word. The past two Sundays, defensive players gathered and watched every third down shortcoming from the previous night’s game. There were 14 in Saturday’s win over Rice, bringing Texas’ two-game total to 22 — most in the country. At 63 percent, the Longhorns are last in third down success and are nowhere near coach Charlie Strong’s goal of 20 percent. Last year, they were at 35 percent, which ranked 23rd nationally.

“You’re just sitting there saying, why did I do that?” Haines said. “I would never do that again. When you’re out there and the emotions are running high, you kind of tense up and you try to do something you’re not supposed to do. You want to go make a play.”

“I don’t think everybody else is doing anything special,” defensive tackle Tank Jackson said. “I think it’s something we’re not doing as a unit.”

Rice converted 14 of 21 third downs, including four times on a 17-play touchdown drive before halftime. In the third quarter, the Owls marched 19 plays for a score and converted two of three third downs. The time they didn’t convert, they got five yards to set up fourth-and-1.

Ten seconds into his press conference on Monday, Strong was already lamenting third down failures.

“What’s happening right now is too many conversions, whether it be missed sacks or not getting pressure or missed tackles,” he said.

As for the offense, they climbed one spot to second-to-last nationally despite taking only 38 snaps against Rice.

“We’ve got to get off the field on third down and give them more opportunities to take the ball,” Strong said.

OSU kickoff: After three night games to start the season, the Sept. 26 home game against Oklahoma State will kick off at 2:30 p.m. The Big 12 opener for both teams will air on either ABC, ESPN or ESPN2. The Cowboys sneaked in at No. 25 in this week’s Associated Press poll after crushing Strong’s alma mater, Central Arkansas, 32-8.

Cal and Charlie: As a hotshot defensive coordinator, Strong came up short several times for head coaching positions, including at California.

After the 2001 season, Strong, then the defensive coordinator at South Carolina, interviewed for the job but was turned down in favor of Oregon offensive coordinator Jeff Tedford. Heading into Saturday’s game, Strong said he holds no grudges against the school or former athletic director Steve Gladstone.

“If I had gotten that job, I might not be here right now,” Strong said.

It’s hard to argue against the Tedford hire; the Bears enjoyed nine winning seasons in his 11 years there. He was replaced after 2012 by Sonny Dykes, who has the Bears at 2-0 after decisive wins over Grambling State and San Diego State.

It took Strong eight more seasons before Louisville gave him his first head coaching job after the 2009 season. At his introductory press conference, Strong broke into tears and said “You just never knew if it would happen.”

Asked Monday how many schools turned him down other than Cal, Strong had a laugh.

Short yards: Daje Johnson was named Big 12 special teams player of the week after returning a punt 85 yards for a touchdown. He had three returns for 119 yards. … Strong said the defense missed eight sacks, including four on the same play. … Wide receiver Marcus Johnson was seen Monday not wearing a protective boot on his foot. He missed the Rice game with an ankle injury.

Fenves: Decision on Patterson had been ‘building over recent weeks’