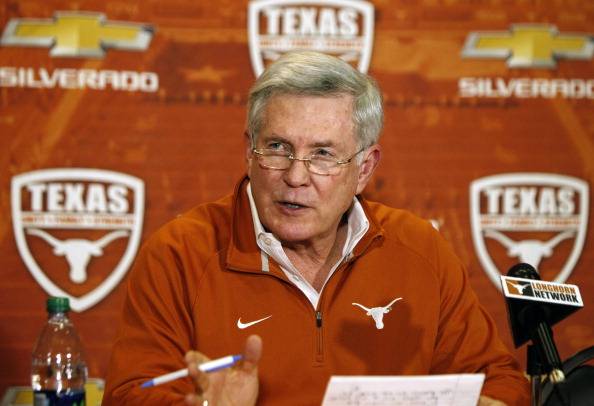 Former Texas coach Mack Brown stated he is happy with his job at ESPN. (Photo by Erich Schlegel/Getty Images)

Texas officials have asked Mike Perrin, a former UT linebacker, to fill the role of interim athletic director. But who would fill that office on a full-time basis?

UT President Gregory L. Fenves, an engineer by trade, may be methodical in his search for a new AD. The search may not begin in earnest until after football season.

“I am prepared to assist the University of Texas and President Fenves in any way I can, but I am not a candidate for the position,” Bowlsby said.

The search could turn back to Oliver Luck, who was the runner-up in October 2013 when UT officials chose Steve Patterson. Luck did not return messages from the Statesman on Tuesday.

Former Texas coach Mack Brown met with Fenves last week in an advisory role, according to a UT source. Fenves is aware that a certain segment of UT donors are pushing to have Brown become the AD. But that is not a realistic choice at the moment, the source said.

Brown did not return messages left by the Statesman. “I hate this for Steve, he was good to me,” the former coach told ESPN. “I’m really happy at ESPN/ABC. I have had no discussions with anyone about the AD job.”

Louisville AD Tom Jurich’s name has been thrown out on social media, probably because of his connections to Strong. Oklahoma’s Joe Castiglione and TCU’s Chris Del Conte are also viable choices.

“Like I’ve said many times I’m yours as long as you’ll have me … I have the best job in America,” Del Conte tweeted to TCU fans on Tuesday.

At Texas, no tears being shed for Steve Patterson