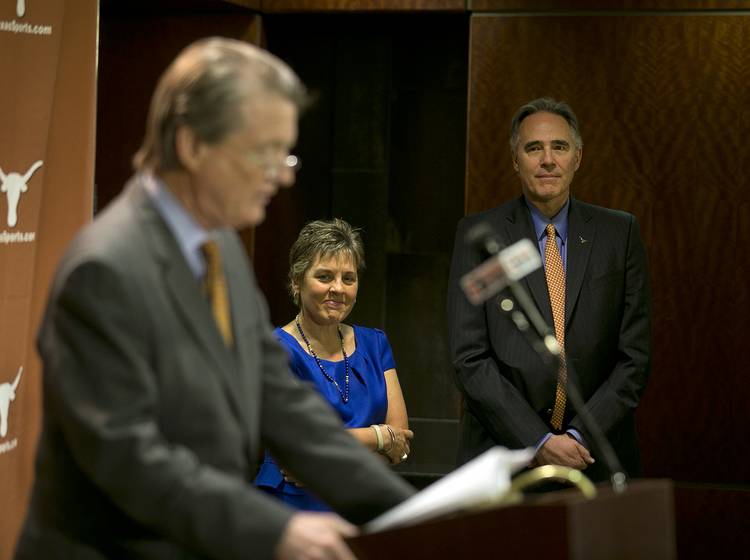 University President Bill Powers introduces Steve Patterson, far right, as the new Athletic Director at the University of Texas at Austin during a news conference in Austin, Tx., on Thursday, November 7, 2013. Patterson is leaving the Athletic Director position at Arizona State to return to Texas where he received both an undergraduate and a law degree. At center is Chris Plonsky, Director of Women's Athletics. DEBORAH CANNON / AMERICAN-STATESMAN

As Texas officials prepare to launch a search for a new men’s athletic director, there is some belief they should look no further than down the hallway.

However, Chris Plonsky insists she is not interested in hopping into the seat vacated by Steve Patterson on Tuesday. Plonsky, the longtime women’s athletic director at UT, attended Mike Perrin’s introductory news conference Wednesday and said she’s looking forward to working alongside the interim men’s athletic director.

She added that she doesn’t want his job despite an opinion piece in the New York Times that trumpeted her as a “logical fit.”

Plonsky has known Perrin for many years and called him “a man of integrity, well known and well respected.”

To what level Plonsky is culpable in the public relations nightmare that engulfed Patterson can be debated, and even Plonsky, who studied journalism and came to Texas for a job in public relations, acknowledged that her department had done a poor job of communicating to fans regarding various initiatives. Among them was the unpopular decision to increase football ticket prices after a losing season in 2014.

“We have to have an accountable, efficient and productive sense of how we operate our part of the university,” said Plonsky, who has served in her current role for 14 years. “There’s a little business to that because we have to finance our own bills, but at the same time you have to make sure you’re accountable to your constituencies and to your fans. We’re going to work harder and better at that. Sometimes our communication has been very poor on it. I’ve got to own it, and I think we’ve got to own it.”

To that end, Plonsky said “we need to enhance our communication team,” which has been ravaged by the loss of five employees since June. Last week, Texas announced it had hired Kevin Mortesen for the position of chief communications officer, a job that will pay him $250,000 annually. Mortesen, who is finishing up as vice president, communications for DineEquity, did not respond to a message to see if he will back out after Patterson’s departure. Plonsky said Mortesen had planned to watch Perrin’s news conference and that the two men had made plans to speak on Wednesday. Mortesen is expected to start work at Texas in early October.

Plonsky said she sent Mortesen a text message after Patterson’s firing that read: “You ready for the firehouse? Open wide.”

Plonsky holds a truly unique position in NCAA Division I athletics because Texas is the only school with two athletic directors. Since 1993, she has also held an external services role for which she reports to the men’s athletic director. Plonsky pulls in less than half of the $1.4 million Patterson made annually and was the target of far less outside criticism than Patterson.

“This set-up has worked well for Texas,” Plonsky said.

And will she stick around?

“Absolutely. Nothing has changed for me.”

Editor’s note: The original version of this story has been updated to accurately reflect Plonsky’s role for the athletics department.