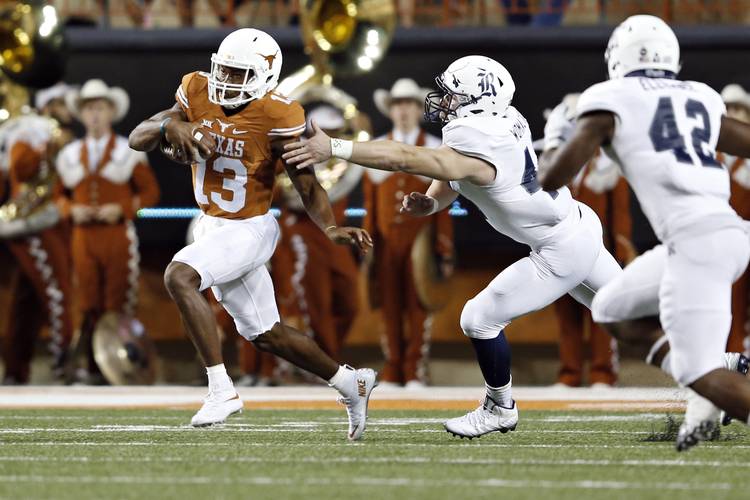 Football. You remember that, right?

The Texas athletic department made national news this week, but the headlines weren’t about the football team. Athletic directors rarely create the firestorm that Steve Patterson did. Mike Perrin appears to have ring-fenced the inferno and snuffed it out overnight.

The always clever marquee outside El Arroyo restaurant on Fifth Street captured the mood: “Steve Patterson, we have a seat here for you. That will be $75.”

With Texas’ AD change now complete, the focus shifts back to the football team, which was 1-1, last anyone checked. California (2-0) comes calling Saturday, with Heisman Trophy hopeful Jared Goff in tow.

Patterson, who was fired Tuesday, had a vision of UT conquering Mexico, China, Dubai and maybe even taking the baseball team to Cuba. Perrin, the new interim athletic director, simply has a vision for a winning football team.

Perrin, who played for coach Darrell Royal in the late 1960s, first came to a UT practice in December 1964 and said it was electric. “It was a feeling I’ve never forgotten. I hope I never do,” he said.

But what do the current-day Longhorns want to look like? That journey begins against the Golden Bears, led by Sonny Dykes, the son of former Texas Tech coach Spike Dykes.

The UT offense, led by play-caller Shawn Watson and quarterback Tyrone Swoopes, was a plodding mess in a 35-point rout against Notre Dame. But new play-caller Jay Norvell and Heard, the former backup who is now the starter, spiced things up in a 42-28 win over Rice.

Heard, a redshirt freshman making his first career start, pumped life and excitement into the offense and Royal-Memorial Stadium. Granted, the offense ran only 38 plays because Rice chewed up the clock. But Heard’s sizzling runs and 69-yard touchdown pass to John Burt left fans wanting more.

Norvell, calling plays for the first time since 2007, said he doesn’t want Texas to be a “jack-of-all-trades offense.” If he’s taking cues from the head coach, Norvell will establish the ground game with the running backs and turn Heard loose.

Things can only improve, judging from the stats. Based on total yardage, UT has the second-worst offense in college football. Texas averages 220 yards per game. Akron’s bringing up the rear at 168.

In the offseason, coach Charlie Strong promised a switch to the spread offense. But that’s not what the Horns showed against the Irish or Owls. It was the same offense as last season, only run faster. The reality is Texas has no true offensive identity yet.

“We want to be known for something,” Norvell said.

Now, Heard gives UT a legitimate running threat, something Swoopes can’t. And when you look at Johnathan Gray’s, D’Onta Foreman’s and Chris Warren’s capabilities, maybe the Horns will try once again to ground-and-pound.

Heard won back-to-back Class 4A state titles by running. He was 36-8 as a starter at Denton Guyer. Heard knows Cal’s defense will come after him, but that’s just fine. “Oh, definitely. They definitely want to challenge me,” he said.

“He’s really a flashy-type player,” said receiver Armanti Foreman, who pulled in a 32-yard touchdown pass from Heard last week. “He can tuck it and run at any moment, and you just never know.”

Heard and the offense must produce some first downs and long drives this week. In the first two games, the defense was gashed early and gassed late. Notre Dame and Rice ran straight between the tackles, right at Texas’ defensive linemen.

“We always talk about being good down the middle,” Strong said of the Rice game. “We never established ourselves and got our feet in the ground.”

Goff, a true pocket passer with 59 career touchdown passes, will stand in the pocket far longer than Rice’s Driphus Jackson did. He’s also not as mobile. The Horns can’t allow Goff to escape the pocket the way Jackson did. “So many missed tackles. I think we had, like, eight missed sacks,” Strong said.

Fan reaction will be intriguing. The athletic director few liked is gone. As Perrin noted, there were plenty of empty seats against Rice. People “voted with their feet,” he said. Will they come back? About 11,000 tickets were unsold as of Thursday.

Perrin is scheduled to be all over the place on game day. He’s scheduled to appear on the Longhorn Network’s pregame show, go to the alumni center to check in with the Texas Exes and walk through the press box to visit with reporters.

He’ll no doubt maneuver through the suites to check in with key donors and shake a lot of hands on the concourse. It’ll help if Strong’s bunch shakes up the Bears.

“I want to be a source of interface with the Longhorn nation,” Perrin said. “I want the fans there.”

Staff takes, Texas vs. Cal: How big is this game? Big enough.