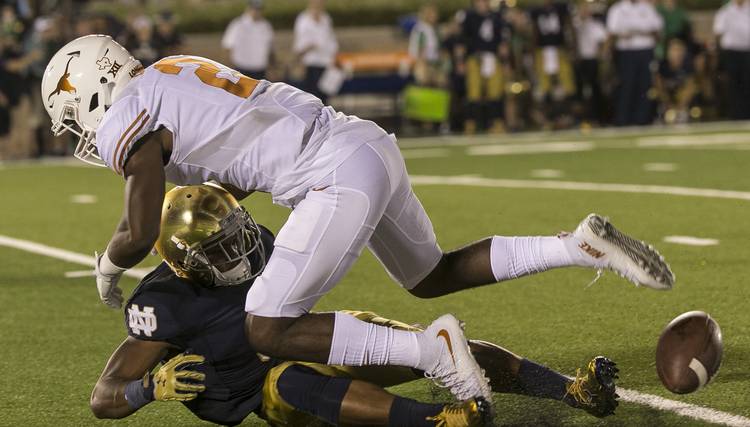 TEXAS’ DEFENSE VS. THIRD DOWN

The Longhorns are dead last in the nation defending third downs, getting off of the field only about one-third of the time. That’s dreadful, and must be corrected. Particularly concerning is Texas’ propensity to give up big gains, including 10 plays of six yards or more on third down. In Sunday film study, the Longhorns viewed all 22 third down conversions by their opponents. It wasn’t pleasant. Cal, meanwhile, is converting 36 percent of third downs — nothing special.

Johnson, Texas’ biggest home run hitter, made some smooth moves on an 85-yard punt return against Rice. He sidestepped the gunner and then bounced off a tackler with a 180-degree spin. He followed his blockers the rest of the way for his first special teams touchdown since the 2013 Oklahoma game. A lesser returner would have thrown up his hand and signaled for a fair catch, but Johnson is willing to take chances. Armed with a prolific offense, Cal has punted just nine times, and only two have been returned. Will Johnson get a chance to dance?

The Longhorns’ front four is too good to be playing this poorly, so eventually Hassan Ridgeway, Tank Jackson and Shiro Davis will break out of their funk. One would think, anyway. New position coach Brick Haley has some work to do —  last week, his unit had fits against Rice, which might have the weakest line Texas will face this season. Cal prefers passing to running, but its ground attack should be respected. The Bears averaged 174.5 yards and scored six touchdowns against Grambling State and San Diego State.

A year ago, the Longhorns had the nation’s No. 11 pass defense despite facing notable air attacks from Baylor, TCU and West Virginia. Charlie Strong appears to have a blueprint for slowing the Air Raid, which is prevalent in the Big 12 and has made its way to Cal under third-year coach Sonny Dykes. Goff can sling it and is eyeing his fourth consecutive 300-yard effort. Look for him to pick on young cornerbacks John Bonney, Antwuan Davis and Kris Boyd. Through two games, Goff has distributed the ball to 15 different pass-catchers.

Could this one come down to the kickers? Both are 1 of 2 on field goals. Rose made from 41 yards and missed from 52. Anderson made from 20 and missed from 35. Both kickers are perfect on extra points. So what separates them? Anderson is still a bit of a novice in his first season on the job. Rose kicked all of last season. Texas, a 7-point underdog, is in need of every point it can get its hands on.