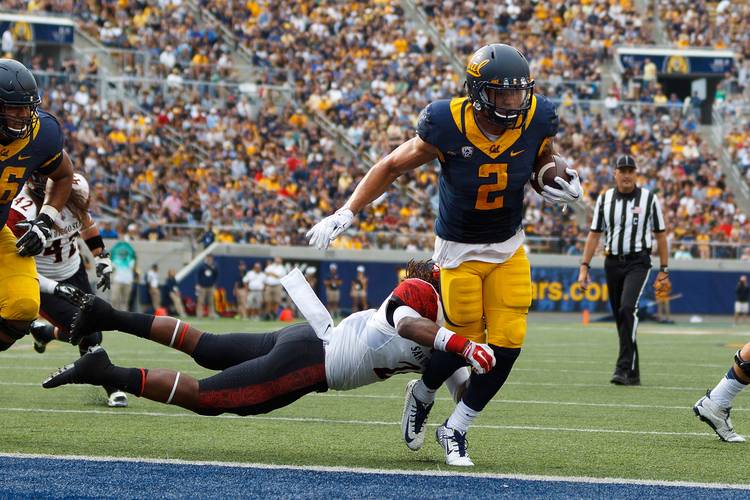 California running back Daniel Lasco was the the team's leading rusher in 2014 with 1,151 yards. (Photo by Jason O. Watson/Getty Images)

On Saturday against Cal, the eyes of Texas will be upon …

The Heisman Trophy darkhorse is the greatest threat to Texas scoring a win and entering Big 12 play next week against Oklahoma State at above .500. What makes Goff so impressive is his consistency from game to game. He has thrown a touchdown in 14 of Cal’s last 15 games and went over 300 yards in wins over Grambling State and San Diego State to start the season. He doesn’t make bad decisions either, and threw just seven interceptions in 2014. He has two this year. Unlike the first two quarterbacks Texas faced — Notre Dame’s Malik Zaire and Rice’s Driphus Jackson — Goff does most of his damage standing in the pocket. Convinced he’ll win the Heisman? A $100 wager could net someone $4,000.

The Woodlands product is among six Texans on Cal’s roster. An 1,100-yard back in 2014, Lasco is off to a fine start in his senior season, scoring touchdowns in both games. He had just five carries against Grambling State, but had a busier day against San Diego State with 123 yards on 19 touches. He is joined at Cal by wide receiver Carlos Strickland (Dallas Skyline), linebacker Nathan Broussard (Plano West), running back Vic Enwere (Fort Bend Austin), safety Billy McCrary III (Rouse) and defensive end Noah Westerfield (Frisco).

He’s a big-play threat. Check that. Davis is a huge-play threat. His four receptions have gone for 32, 59, 75 (touchdown) and 4 yards. Average yards per catch: 42.5. Including Davis, 15 Bears have caught a pass and five have scored.  Look for Cal to match up Davis against a safety in the deep part of the field.