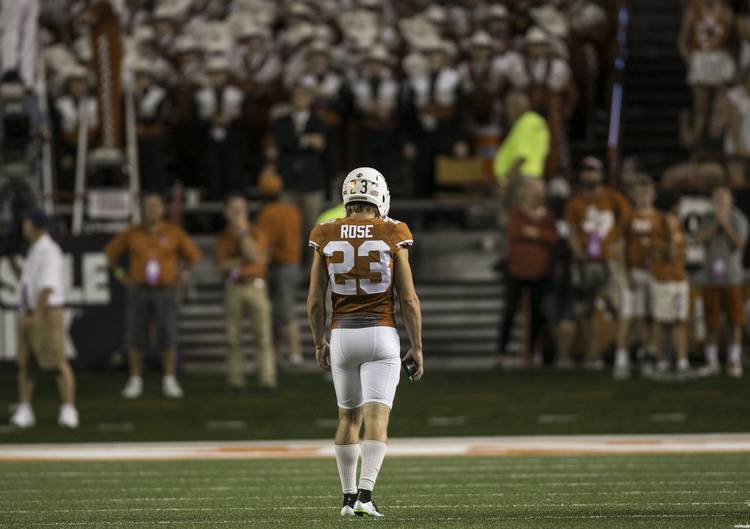 SEPTEMBER 19, 2015 - Texas (23) Nick Rose walks out to midfield to kickoff after missing the point after attempt that would have tied the game against California during the second half of the NCAA game held Darrell K Royal -Texas Memorial Stadium in Austin, Tx., on Saturday, September 19, 2015. California defeated Texas 45-44. (RODOLFO GONZALEZ / AMERICAN-STATESMAN)

By all accounts, Texas’ kicker is a good guy and a favorite among his teammates. He posts fun kicking videos to social media, lets his hair grow to ridiculous lengths, and hangs out with linebackers, which is not exactly common of a 194-pound special teams player.

His peers came to his defense Saturday night after Rose missed an extra point that could have sent Saturday’s game against Cal into overtime. Following Jerrod Heard’s 45-yard touchdown run with 71 seconds to go, Rose kicked wide right into the north end zone, stunning the crowd of 91,568.

Rose was not available to reporters after the 45-44 loss, but others took up for him.

“He’s a great kid,” offensive play-caller Jay Norvell said. “This game is not on him.”

Compounding Rose’s difficult night were two poor onside kicks that he kicked too hard and without much bounce. Cal recovered both of them.

“He’s handling it real tough,” linebacker Malik Jefferson said. “We tried to get around him. He’s really down on himself.”

It was Rose’s first missed extra point since last season. The miss may have been influenced by Cal’s Darius White, who rushed by blockers on Texas’ right side and appeared to tip the ball.

“On the edges they weren’t blocking as hard,” White said. “If we went really hard, really fast, quick, did our job and what we were supposed to do, everything was going to work out. That is all I did.”

Forgotten in the madness in the 27-yard field goal Rose made in the second quarter. He is 2 of 3 on the year, missing from 52 yards at Notre Dame.

“Nick had been doing well,” head coach Charlie Strong said. “He felt the pressure coming from the outside. Just go ahead and kick through it. If anything, the guy would have maybe ran into you and got us another kick.”

In the summer, Rose posted a video where he did a back-flip and kicked a field goal in mid-air. In another attempt at trickery, he made an 80-yard field goal off of a kicking tee. Strong joked that Rose had better just focus on making from 40 yards.

Or better yet, a 20-yarder — the distance of an extra point.

“I told him you have to get your head up,” Strong said. “It’s a mistake that can be corrected.”

Texas could have taken the lead with two points, but Strong made it sound like leaving the offense on the field was not a serious consideration.

Even had Rose made the kick, there’s no telling if it would have made a difference in the result. The way Texas was playing defense — not very well — Cal could have easily driven for the winning points. The Bears had one timeout and more than a minute with which to operate.

“Stuff like this happens,” linebacker Peter Jinkens said. “Just gotta fight through it and do better.”