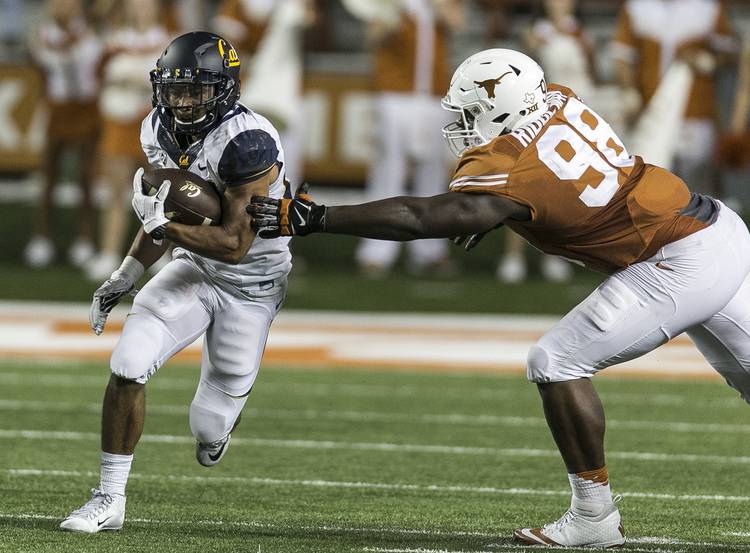 Texas defensive tackle Hassan Ridgeway reaches and misses California's Khalfani Muhammad as he races for a 74-yard touchdown during the second half of Saturday's 45-44 loss at Royal-Memorial Stadium. (RODOLFO GONZALEZ / AMERICAN-STATESMAN)

There were 161 snaps taken in Texas’ heartbreaking 45-44 loss to Cal on Saturday.

Here are five that ended up making a big difference:

In need of one yard to move the chains, Johnathan Gray twice came up short on their opening drive. To the fans’ disbelief, Gray’s knee was ruled down about a yard short on third down. Amid boos over a questionable spot, the offense hurried to the line and Gray was stuffed on a toss to the right. Credited with the stop was Hardy Nickerson, the son of the former NFL pro bowl linebacker by the same name.

Gray may be falling out of favor with his coaches. He had just two second-half carries (11 total for 46 yards with two short touchdowns) and was passed over in crucial late-game situations for D’Onta Foreman and Chris Warren.

In the game’s buildup, defensive coordinator Vance Bedford warned that Cal’s Jared Goff was not a statue and could escape the pocket if needed. He wasn’t kidding. On third-and-10, Texas sent five rushers and opened the middle of the field for Goff to take off extend a first quarter drive. It was the first positive yards gained by Goff in three games, and was key to Cal’s 11-play touchdown drive.

Entering the game, the Longhorns had the nation’s worst third-down defense, and they actually slid further in the first quarter, surrendering four of five conversions. Cal was just 1 of 8 the rest of the way, though, and Texas improved to second-to-last on third down.

An illegal substitution penalty moved Cal back five yards on fourth-and-1, and Sonny Dykes summoned his offense to the sideline. Matt Anderson’s 44-yard field goal sailed wide right, and Texas retained the lead, 17-14, with 10 minutes left in the first half. Longhorns coach Charlie Strong was fired up, swinging his fists.

None of that would have mattered if not for Duke Thomas’ pulling down Stephen Anderson a yard short of the marker on third down. Thomas (five tackles) hasn’t made many big plays, but he’s having a steady senior season.

4. Should’ve been a wrap

After Shiro Davis’ strip-sack and Gray’s ensuing touchdown run, Texas was fixing to head into break with a 10-point lead and getting the ball to start the second half. It didn’t work out that way because of a missed tackle. Bryce Cottrell whiffed against Khalfani Muhammad, who rumbled for 49 yards to the UT 26. Three plays later, Texas’ lead was reduced to 24-21 on Vic Enwere’s 1-yard run.

The game would’ve been over — and for Nick Rose’s sake, it’s a shame it wasn’t — had Anderson come down with a routine catch on third down on Cal’s final drive. Texas was out of timeouts, so the Bears would’ve been able to take knees and bleed most of the remaining 1 minute, 51 seconds.

Instead, what unfolded was the most bizarre ending of Strong’s coaching career. Jerrod Heard completed passes to Gray (17 yards), Armanti Foreman (13), and Gray again (6), before Heard broke free for a 45-yard score to (almost) cap a three-touchdown comeback.

Strong didn’t bother watching Rose’s extra point because “extra points are automatic.” The senior pushed it to the right, delivering a brutal ending that was delayed by Anderson’s drop.

A thorny end to Rose’s night, but teammates defend him