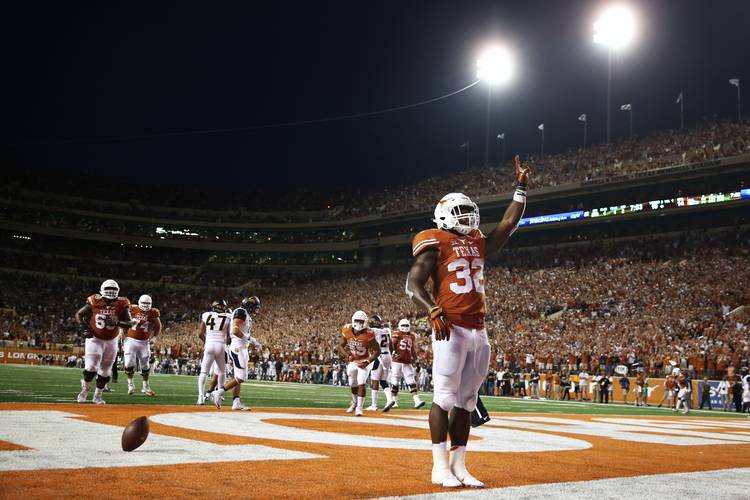 Texas 7, Cal 7 — Who said Jerrod Heard couldn’t pass? Making his second start, Heard hooked up with Johnson for 45 and 54 yards. And who said Jared Goff couldn’t run? The Cal quarterback, who is typically chained to the pocket, got loose and converted a third-and-10 for his first positive rushing gain of the season. Later, he eluded Hassan Ridgeway’s sack attempt and connected with Maurice Harris in the end zone on third down. Texas entered the day with the nation’s worst third down defense and actually regressed in the opening quarter, surrendering conversions on four of five tries. Both Longhorns safeties had to leave — Dylan Haines (ejected for targeting) and Jason Hall (shoulder). Goff, a first-round draft projection, had to be slobbering. Haines’ replacement, Kevin Vaccaro, forced a fumble near the goal line that denied Cal a second touchdown.

Cal: Maurice Harris 6-yard TD pass from Jared Goff (Matt Anderson PAT), 8:49
The drive: 11 plays, 64 yards, 3:25
Key play: On one of three third-down conversions of the drive, Goff hit Stephen Anderson for a 22-yard gain at Texas’ 7. Longhorns safety Dylan Haines was flagged for targeting on the helmet-to-helmet tackle, and was ejected from the game.

Halftime. Texas 24, Cal 24 — Finally, a big play by the defensive line. Missing in action all season, Shiro Davis blew by left tackle Brian Farley for a sack and fumble that set up Johnathan Gray’s second touchdown of the quarter. Gray’s first score came on a 95-yard drive that began after he inexplicably took a kickoff out of the end zone with the coverage team quickly approaching. … John Burt is nothing if not economical. The freshman deep threat pulled in his third catch of the season, this one for 43 yards, and brought his average to 53 yards per reception. Heard went back to Burt on the final drive before halftime, but was intercepted for Texas’ first offensive turnover of the season. That led to a 34-yard field goal that tied the game at 24-24. It was a tough half for redshirt freshman cornerback John Bonney. He let Kenny Lawler roam free on fourth down for a 17-yard touchdown and was beaten again by Lawler for 22 yards.

Cal 45, Texas 24 — Two days after the Notre Dame loss, Sedrick Flowers took ownership and apologized for punching an Irish player. Apparently, he didn’t learn from his mistake. The senior left guard took out a Cal player’s legs far away from the play, drawing a penalty for unsportsmanlike conduct and setting up third-and-24. It was a tough quarter for Heard, who followed his interception before halftime with a fumble on the opening drive that led to a Cal touchdown. Later on, Heard was at the center of a scary moment when he was pulled down hard by his facemask by James Looney. Somehow Heard stayed in the game. Curiously, Texas went a full drive with Burt on the sideline and with Johnson appearing scarcely. In their place were non-factors Jacorey Warrick, Caleb Bluiett and Andrew Beck.

Cal: Lawler 3-yard TD pass from Goff (Anderson PAT), 4:28
The drive: 8 plays, 71 yards, 3:34
Key play: Goff threw incomplete on third-and-3, but Malik Jefferson was flagged for a hands to the face infraction as he leaped at the line to block the pass. That 15-yarder gave Cal a first down at Texas’ 30.

Final. Cal 45, Texas 44 — After going silent in the third quarter, Texas erupted for 231 yards and scored on drives of 75, 92 and 81 yards. Heard zigged and zagged to cut Cal’s lead to 14 points, and then the defense stopped Cal before midfield. A holding penalty against Gray ruined the next drive and Heard took a sack on third-and-17. In between TD runs by D’Onta Foreman (27 yards) and Heard (45), safety Kevin Vaccarro made a hit to break up a ball intended for Stephen Anderson. Rose will get roasted for missing the extra point that would’ve tied the game, but his feeble attempts on two onside kicks should not be ignored. Too hard, not enough bounce.